In the Footsteps of Hind Swaraj. The Oeuvre of the Historian and Political Thinker Dharampal – 1

As a provocative Gandhian thinker with a creative and imaginative intellect, Shri Dharampal (19th February 1922 – 24th October 2006) engaged in extensive archival research in British and Indian archives which revolutionised our understanding of the cultural, scientific and technological achievements of India at the eve of the British conquest. 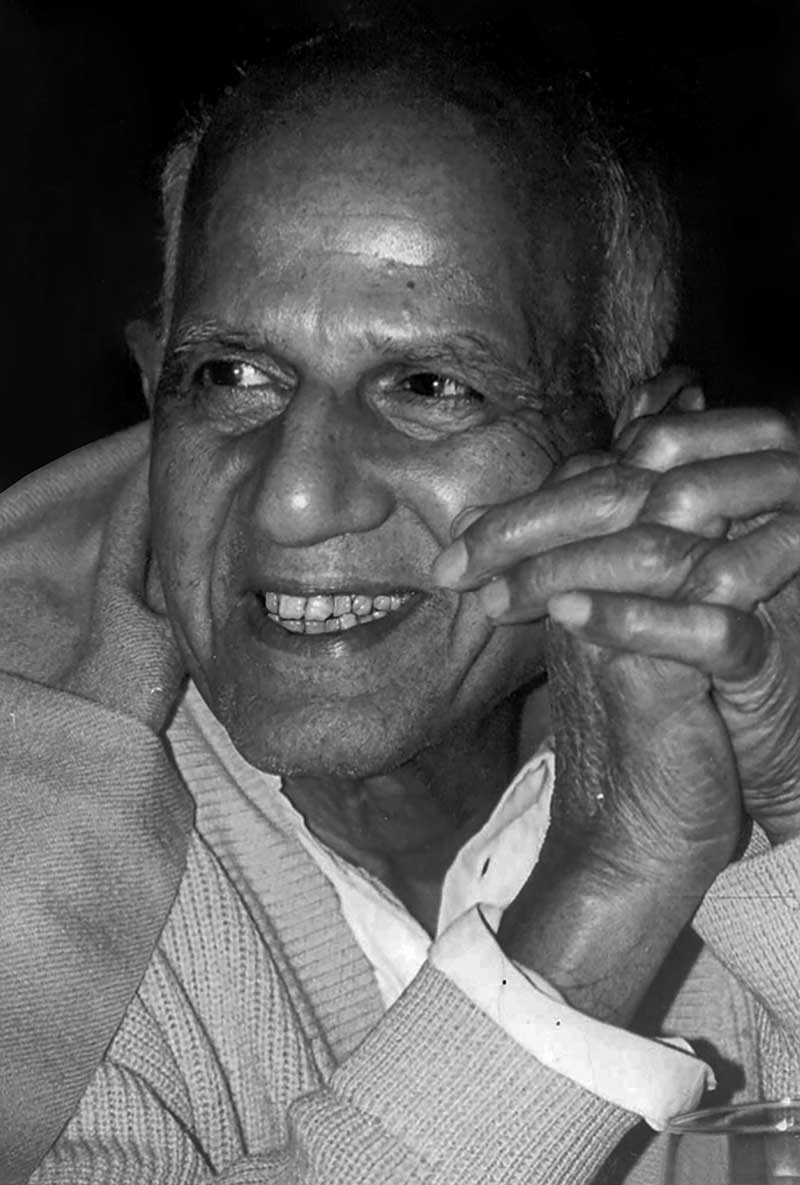 Engaging with the oeuvre of one’s father in the public sphere, albeit a difficult task, is essential given the crucial significance of Shri Dharampal’s research. As a provocative Gandhian thinker with a creative and imaginative intellect, Shri Dharampal (19th February 1922 – 24th October 2006) engaged in extensive archival research in British and Indian archives which revolutionised our understanding of the cultural, scientific and technological achievements of India at the eve of the British conquest. However, the enormous portent of his discoveries still needs to make more of an impact on conventional perceptions of pre-colonial India. These commonly held assumptions of underdevelopment and backwardness before the advent of the British raj – refuted by his painstaking historical investigations – had been induced (as he stated time and again) by colonial indoctrination and were maintained in place by a persistent sense of subservience to the modern west experienced, unfortunately, by too many so-called ‘educated’ Indians. According to Shri Dharampal, until his very last days in Sevagram Ashram, an ‘intellectual-psychological unburdening’ was a matter of urgency, so that ‘India could come into its own’, as he phrased it, and in doing so, bring to fruition Gandhiji’s vision of Hind Swaraj. This entailed that Indian societal organisation, its polity as well as its cultural and economic institutions would become regenerated, locally and nationally, from within – and after intense self-reflection, determined by the needs of the people concerned. The moorings of Indian institutions, according to him, should be rooted in an Indian civilisational understanding and connected with the natural swabhava of the Indian people to thus energise India’s regeneration.

Besides reappraising a selection of his publications, such as Indian Science and Technology in the Eighteenth Century (1971), Civil Disobedience in Indian Tradition (1971) and The Beautiful Tree (1983), this introductory essay, in tracing the genesis of Shri Dharampal’s historical research, simultaneously discusses the intellectual as well as the political implications of his oeuvre: As an endeavour to challenge or delegitimise the historical master narrative relating to India’s pre- and early colonial past, his research aimed to initiate further studies into remapping history with a view to accordingly reshape contemporary Indian society and polity.

Originating from Kandhla, a small town in the Muzaffarnagar district of western Uttar Pradesh, but having been educated in Lahore,[1] Dharampal belonged to a generation of young Indians who were deeply inspired by Mahatma Gandhi’s propagation of swaraj.  Re­sponding to Gandhiji’s call for individual satyagraha in 1940, he joined the freedom move­ment, abandoning his B.Sc. studies in Physics,[2] and became actively involved in the Quit India movement, initiated in August 1942.[3] After a short term of imprisonment,[4] his na­tionalist fervour was channelled in the direction of Gandhiji’s constructive programme which involved strengthening the decentralised social, political and economic village organisation. Intent on regenerating India’s rural population, Dharampal became associated in 1944 with Mirabehn (the British-born disciple of Gandhiji) in a village development project near Haridwar.[5] His participation in this experiment in community revitalisation was interrupted by portentous political developments: During the Partition upheaval, in 1947-48, he was put in charge of the Congress Socialist Party centre for the rehabilitation of refugees coming from Pakistan. Working in the make-shift camps on the outskirts of Delhi,[6] he came in close contact with Kamaladevi Chattopadhyaya and Dr. Ram Manohar Lohia, as well as with numerous younger friends, such as L.C. Jain, in Delhi; subsequently in 1948, he functioned as a founding member of the Indian Cooperative Union (ICU).

Figuring prominently in these various activities was his endeavour to sustain Indian community structures, both rural and urban, through social, political or economic means; for he was convinced about the central role of the community in the ongoing nation-building enterprise. In search of communi­tarian initiatives – also in the global arena – which could possibly serve as a model for Indian rural recon­struction, he decided at the end of 1948 to go and study the much acclaimed kibbutzim ex­perimental system in Israel. However, due to the partial closure of the Suez Canal, he had to reschedule his sea voyage via England. There, as chance would have it, in an educational and agricultural reconstruction programme in post-war rural Devonshire, Dharampal met and de­cided to marry Phyllis (my mother), a cultured and altruistically oriented English lady who shared his commitment to rural reconstruction. Paradoxical as this marital union may have appeared in the historical context of Indian Independence from the British Raj, nonetheless, the pioneering spirit of this intercultural couple does underscore in exemplary fashion the immense attraction exercised by their mutually shared humanistic-communitarian visions: So intense was their idealism that it not only transcended nation-state boundaries but also challenged conventional norms.

Yet, alongside and perhaps superseding these universalistic aspirations,[7] a strong sense of commitment to the cause of Indian rural regeneration instigated Dharampal to travel back to India with his acquiescing young bride in the autumn of 1949. Choosing the overland route with the intention of visiting Israel, he was eventually able to familiarise himself with the organisation of the oldest kibbutz, Degania Alef,[8] set up by Russian Jews. However, after a short stay, he realised that their highly regulated communitarian life-style would not function as an appropriate blue-print suitable to Indian conditions which were defined by divergent social and cultural constellations. The task of understanding Indian historical configurations was to constitute a primary incentive and focus of his subsequent research which took concrete shape a decade and half later.

However, in 1950, having gained valuable insights from observing and comparing temporally parallel but culturally and politically distinct endeavours in societal reconstruction in Britain, Israel and independent India, Dharampal felt the urgent need to resume his work with Mirabehn. Above all, he was convinced that ‘ordinary’ Indians were as capable and innovative as their European or Middle-Eastern counterparts; yet due to colonial subjugation and exploitation, having lost all personal initiative, they had been reduced to their present state of apathy and destitution. Hence, summoning the support of a group of dedicated social workers, Dharampal, propelled by idealistic zeal, set about constructing the community village of Bapugram near Rishikesh,[9] constituted of about fifty resourceless agricultural families. However, after many years of strenuous and often frustrating work (due partially to the lack of creative dynamism emanating from the artificially created community whose structures were not organic), Dharampal became increasingly disillusioned by the futility of this idealistic experiment in village development. And all the more so since his endeavours in rural regeneration seemed to have no impact on the post-Independence mainstream that was mesmerised by the Nehruvian industrialisation agenda.

[1]  In Lahore he attended the Dayanand Anglo-Vedic School (matriculating in 1938), and considered himself a child of the Gandhian era, as rendered explicit in his own words: “My.first glimpse of Mahatma Gandhi was in December 1929 at the Lahore Session of the Indian National Congress. I had gone there with my father who – like thousands of other young people at the call of Mahatma Gandhi – had abandoned his university education. Those were days of great excitement for me and many of my age (I was barely eight!).” Dharampal: Understanding Gandhi, Other India Press, Mapusa, 2003, p.1.

[2] Begun at Fergusson College, Lahore, Dharampal then shifted to Meerut College to facilitate entrance to the Engineering College at Roorkee. Shortly after, in October 1940, he abandoned his studies altogether.

[3] Having heard as a fervent spectator Gandhiji’s speech, given at the Congress session in Bombay (Gowalia tank maidan), he joined the Quit India movement as an underground member of the AICC run by Sucheta Kripalani; carrying messages and literature on behalf of the AICC between Meerut, Varanasi, Patna, Bombay and Delhi, he also came in contact with Girdhari Kripalani (a nephew of Acharya Kripalani) and Swami Anand, among others.

[5]  Near the Roorkee-Haridwar highway, Mirabehn had been given (on government lease) a piece of land where she established the Kisan Ashram, assisted by Dharampal from October 1944 until August 1947.

[6] In Kurukshetra, where he organised a co-operative rehabilitation camp for about 400 families who had been displaced from Jhang.

[7] Interestingly, during his stay in Britain, he enrolled as an occasional student at the London School of Economics to attend courses on diplomacy and world affairs.

[9] As part of the Pashulok Trust which consisted of 700 acres of of land leased to Mirabehn by the government.

When an Indian Met the ‘Intimate Enemy’: Nirad Chandra Chaudhuri’s Life and Work - 1
Did Gandhi Get India Her Independence?
In the Footsteps of Hind Swaraj. The Oeuvre of the Historian and Political Thinker Dharampal – 7