In this article, Dr. Probal Roy Chowdhury introduces the major works of Dharampal and discusses what he contributed to Indian historiography. He was one of the pioneers of modern Indian history, particularly the history of Indian education and educational institutions. 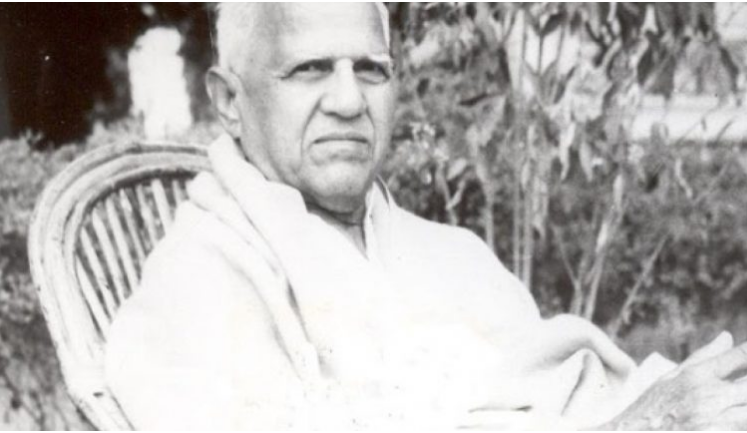 Dharampal (1922-2006) was a Gandhian thinker and historian, whose seminal works on pre-British Indian society has led to a radical reappraisal of the mainstream historiography on the Indian society and polity prior to the British rule.  Born in 1922 in Kandhala, a small town in the Muzaffarnagar district of Uttar Pradesh, Dharampal considered himself to be a child of the ‘Gandhian era’.  His first glimpse of the Mahatma at the tender age of seven left an everlasting impression on his life, and later inspired him to take part in the national struggle for independence. After independence, Dharampal was involved in rural reconstruction projects with Gandhiji’s disciple Mira Behn.  During 1958-64, he worked as the General Secretary of the Association of Voluntary Agencies for Rural Development (AVARD), of which Sri Jayaprakash Narayan was the President.  In November 1962, after India’s shameful defeat during the Chinese invasion, Dharampal (along with his colleagues Roop Narayan and Narendra Datta) wrote an open letter to all the members of the Lok Sabha asking for Prime Minister Jawaharlal Nehru’s resignation on moral grounds.  Castigating the Prime Minister was a risky business those days, and he was arrested and imprisoned in the Tihar Jail for almost two months.

Starting around 1964, Dharampal embarked on what turned out to be a life-long mission to look for archival materials of eighteenth and nineteenth century pertaining to the functioning of Indian society and polity prior to the European conquest of India, and the way they were transformed subsequently under the British rule.  Much of this exploration was carried out in the British Library and other archives in England and India, and led to a number of seminal publications.  Dharampal’s scholarly work has, for the first time, presented a well-documented and comprehensive view of the Indian society when it was functioning as per its own norms and preferences prior to British rule.

Apart from The Beautiful Tree, his documentation of indigenous education in eighteenth century India, which we will discussing shortly, the following are some of his major works: Panchayat Raj as the Basis of Indian Polity: An Exploration into the Proceedings of the Constituent Assembly (New Delhi: AVARD, 1962); Indian Science and Technology in the Eighteenth Century: Some Contemporary European Accounts (Delhi: Impex India: 1971); Civil Disobedience and Indian Tradition: with Some Early Nineteenth Century Documents (Varanasi: Sarva Seva Sangh Prakashan, 1971); The Madras Panchayat System, Vol II: A General Assessment (Delhi: Impex India, 1972); Some Aspects of Early Indian Society and Polity and their Relevance to the Present (Pune: Indian Association for Cultural Freedom, 1988); Bharatiya Chitta, Manas and Kala (originally published in Hindi from Patna by Pushpa Prakashan; translated into English with a preface and glossary by Jitendra Bajaj: Madras: Centre for Policy Studies, 1993); Despoliation and Defaming of India: The Early Nineteenth Century British Crusade (Wardha: Bharat Peetham, 1999); The British Origin of Cow-Slaughter in India: with some British Documents on the Anti-Kine-Killing Movement 1880–1894 (co-authored with T.M. Mukundan; Mussoorie: Society for Integrated Development of Himalayas, 2002); Understanding Gandhi (Mapusa: Other India Press, 2003); and Rediscovering India: Collection of Essays and Speeches: 1956-1998 (Mussoorie: Society for Integrated Development of Himalayas, 2003).  In the 1980s and 90s, Dharampal was elected a member of the Indian Council for Historical Research (ICHR) for a couple of terms.  In 2001, the Government of India appointed him chairman of the National Commission on Cattle.  Dharampal passed away on 24 October 2006 at Sevagram (Mahatma Gandhi’s Ashram near Wardha, Maharashtra).

A detailed and rigorous substantiation of Gandhiji’s pronouncements on the nature and extent of the indigenous education system in India in the early decades of the nineteenth century has been presented by the renowned Gandhian thinker and historian Dharampal in his book The Beautiful Tree: Indigenous Indian Education in the Eighteenth Century (Delhi: Biblia Impex, 1983).  Dharampal titled his book as ‘The Beautiful Tree’ following Gandhiji’s reference to the indigenous system of education in his London speech of 1931.  In this book, Dharampal has reproduced all the documents pertaining to the survey of the indigenous system of education that was conducted in the Madras Presidency during 1822-25.  The book also includes substantial extracts from some of the other surveys of indigenous education system, such as the survey conducted by William Adam in the Bengal Presidency in the 1830s,[1] as also the data presented by G.W. Leitner on the state of indigenous education in the Punjab province around the time of its annexation in 1849, and later in 1882.[2]

The detailed data presented in Dharampal’s book, The Beautiful Tree, shows that the indigenous education system was indeed very extensive.  At the conclusion of the survey in Madras Presidency, Sir Thomas Munro,[3] the then Governor of the Presidency, estimated that the number of boys undergoing instruction was nearly one-third of those of the school-going age.  This was in fact a gross underestimate as it did not adequately take into account the fact that a very large number of students were being instructed privately at home.  If the data on those who were educated at home were correctly incorporated, the percentage of boys of school-going age who were undergoing instruction (in schools as well as at home) would be at least of the order of two-thirds or 65%.[4]

Dharampal’s book also brought to light, for the first time, the crucial data on the community-wise break-up of the students as provided in the reports submitted by the collectors of various districts of Madras Presidency.  These reports show that in most districts the so-called dvijas (Brahmanas, Kshatriyas and Vaisyas) constituted only about 30% of the students undergoing instruction in the indigenous schools; while the overwhelming majority of the students (nearly 70%) hailed from the non-dvija communities – Sudras, and what are termed as the “Other Castes” in the reports of the 1822-25 Survey, and perhaps correspond to communities which are included amongst the Scheduled Castes and Scheduled Tribes today.[5]  Dharampal drew attention to the fact that most of the boys studied for a period of not less than five years on the average in the indigenous schools.  He also highlighted the fact that the indigenous system of education in Madras Presidency in ca.1825 was more widespread and vibrant than the nascent system of public education that was emerging in England towards the end of the 18th century.

The indigenous system of education which prevailed in the 1820s in the Madras Presidency and elsewhere in India received no support from the British state.  Soon the British rulers decided to introduce a new system of education in India.  Right from the outset, it was clear that the main objective of the British introduced education system would be to create a small class of Indians who had some acquaintance of the English language and modern European knowledge; and there was no concern for the education of the larger sections of the society or for the indigenous system that still catered to their education.

Previous article in the series can be read here.

Dharampal (1986). Some Aspects of Earlier Indian Society and Polity and Their Relevance to the Present. Pune: Indian Association for Cultural Freedom.

Hartog, Philip (1939). Some Aspects of Indian Education Past and Present. Oxford.

Leitner, G.W. (1882). History of Indigenous Education in the Panjab since Annexation and in 1882. Calcutta: Superintendent of Government Printing.

[1] William Adam (1796-1881) was born in Scotland and came to India in 1818 as a Baptist minister.  He later resigned his position as a Baptist missionary and started the Calcutta Unitarian Society along with the Indian reformer Raja Rammohan Roy in the early 1820s.  His reports on the state of education in Bengal are in three volumes, which were published from Calcutta in 1835, 1836 and 1838 respectively.

[2] Gottlieb Wilhelm (William) Leitner (1840-99) was a British orientalist.  Born in Pest, Hungary, in a Jewish family, Leitner showed an extraordinary ability in languages even in his childhood.  As a linguist, he is said to have had acquaintance with some fifty languages. At nineteen, he became a lecturer in Arabic, Turkish and Modern Greek, and at twenty-three was appointed Professor in Arabic and Muslim Law at King’s College, London.  In 1864, he became the principal of Government College University at Lahore.  He was instrumental in the foundation of the University of the Punjab.  While in Punjab, he founded many schools and public libraries.  He retired from the Indian Civil Service in 1886.  Leitner’s voluminous History of Indigenous Education in the Panjab since Annexation and in 1882 was published from Calcutta in 1882.

[3] Major General Sir Thomas Munro (1761-1827) was born in a Scottish merchant family in Glasgow and was educated in the University of Glasgow.  Upon appointment to an infantry cadetship in 1779, he came to Madras, and served in South India for almost half-a-century in various capacities: first as an army officer, then as collector of various districts, and finally as the Governor of Madras Presidency during 1820-27.  He died of cholera in July of 1827 while touring the Cuddapah region where he had been collector for several years.

[4] The total number of boys studying in the indigenous schools in ca.1825, as reported by various collectors, added up to about one-fourth of the boys of school-going age.  However, it was also reported that, apart from those attending schools, a large number of boys were being instructed at home.  Detailed information on this was provided only by the collector of Madras district, who reported that the number of boys who were instructed at home was nearly five times the number of those being instructed in the schools.  In spite of this, Munro merely made an ad-hoc estimate that “the portion of the male population who received school education [privately as well as in public schools, may be taken] to be nearer to one-third …of the whole” (Dharampal 1983:249).  As will be argued in chapter I, even if it were to be assumed, that on the average, the number of boys who were instructed at home were at least double the number who were instructed in schools (as was the case for all the communities), the percentage of boys of school-going age who were undergoing instruction (in schools as well as at home) will turn out to be much larger, at two-thirds, or around 65%.

[5] The boys from the ‘Other Castes’ who were studying in schools indeed constituted 15% of all the boys under instruction.