And Shri Rama Returns to Ayodhya!

Today on 5th August 2020, after hundreds of years, Shri Rama is coming back to Ayodhya. After the sacrifice of millions of Hindus, this generation is lucky enough to see the Grand Rama Temple built at Ayodhya. This is a story of how this happened. Jai Shri Rama. 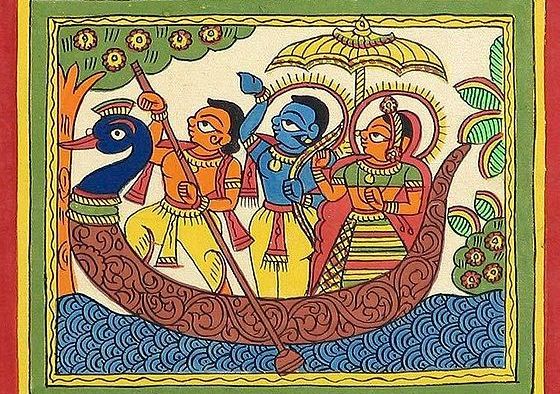 One of the most evocative of scenes in the Ramayana is the one in which Prabhu Rama has already been exiled and he leaves along with his beloved wife and loving brother, on a barge, in the sacred Sarayu River. As the holy banks of the Sarayu of Ayodhya recede in distance, as the city in which Shri Rama was born, as the city in which he played with is mothers, the city which he was once destined to rule receded in distance, tears come to Rama’s eyes. For who could not get emotional upon leaving one’s birthplace?

But Shri Rama was not exiled just once. He was exiled once again when the barbaric Islamic invaders arrived in Ayodhya, brutally destroyed Shri Rama Temple, killed all the priests and the Hindus living nearby, violated Hindu women, killed Hindu children and destroyed all the sacred symbols and vigrahas of our beloved Shri Rama.

That day Shri Rama was once again exiled and for an indefinite time.

Ayodhya was never forgotten once the Rama Temple had been destroyed and a mosque was built over its foundations. The Hindus always made sure that their claim on the temple is never forgotten and that the site always remains a contested site until the Hindus get it back. Even though the original Rama temple had been destroyed by Muslims, they have laid claim to the site again and again. This is clear from the history of litigation of the site.

Dr. Meenakshi Jain in her brilliant book Rama and Ayodhya tells us that in 1858, Muhammad Asghar the Muezzin of Babri Masjid complained to the British that the Hindus were worshipping in the Masjid and had created ‘chabutara’ overnight and kept adding to the ‘illegal construction’. One thing which becomes clear from his complaints is that the Hindus prayed in the Masjid, in the courtyard as well as in the outer courtyard. It shows that the site had been fiercely contested by the Hindus.

In another letter in 1860 by Mir Rajib Ali to the Deputy Commissioner, it is complained that the Hindus are increasing their ‘encroachment’ within the mosque every day and start blowing conches when the sounds of the muezzin is heard. In 1866, Muhammad Afzal, Mutawalli of Babri Masjid complains that the Hindu Bairagis keep increasing the ‘illegal construction’ within the Masjid compound.

In 1877, Muhammad Asghar complains that MahantBaldeo should remove the idols that he had installed inside the Masjid. The complaint also mentions that a new gate for letting in the Hindu devotees had been opened up in the precincts and due to this the Muslims were annoyed. The tide is now turning in Hindus’ favor. In another complaint by Mohammad Asghar in 1882 it is accepted by the Muslim side that the Hindus have celebrated Ram Navmi and KartikMela from ‘ancient times’ within the precincts of the Masjid.

In 1885, in another judgment, the Sub Judge, Faizabad, finally accepts the Hindu claim on the actual property of the Masjid and the existence of Hindu structures within the Masjid precincts. This history makes it clear that the Hindus, not for a single day, forgot that this is the sacred city of their beloved Shri Rama, that this is the city from which Shri Rama was exiled and now has to come back.

Hindus have also tried to take back Ayodhya in one way or the other way.

Dr. Jain tells us that in August 1855, Wajid Ali Shah, the last Nawab of Awadh, sent a purcha to the British Resident Major James Outram, complaining about Hindus ‘meddling with the Babri Masjid’ at Ayodhya. Various Muslims in Ayodhya were complaining about the ‘troublesome acts of Hindus’. The incident clearly shows how Hindus were always striving to take back Rama Janmabhoomi. The movement was not invented by the VHP or the RSS.

A fence had earlier been erected to separate Babri Masjid from the Hindu place of worship that the Hindus had created within the ramparts. The purcha complained that this fence was torn down by the Hindus. At the incident of a Muslim burial, the Hindus sacrificed a pig in the Masjid and blew conch shells, thus inconveniencing the Muslims.Hindus, as the purcha complained, also destroyed a Muslim tomb in the precincts.

The Nawab complained that the Bairagis (Hindu saints) had come to dominate the place in and around the Masjid and was assisted by Hindu kings like Raja Man Singh and Raja Kishan Dutt. This purcha shows that how Hindus have always strived for taking back Rama Janmabhoomi from its destroyers. The efforts always continued. The Hindus never lost hope of building a Rama Temple at Ayodhya. And on 5th August 2020, this dream is about to come true.

The Islamic invasion of India destroyed millions upon millions of Hindu temples. No important and ancient Hindu temple survived intact. Most were destroyed completely. Even then, Hindu rulers and sages kept trying to revive Hindu civilization and to save Hindu heritage by rebuilding Hindu temples.

Padma Shri winner Dr. Meenakshi Jain tells us that the Amer ruler, Sawai Jai Singh (1700-1743) and the Ramanandi sadhus were some of them. The Jaipur state considered Rama as their ancestors and thus had a special relation with the Ramanandi group of sadhus, who also existed to protect the heritage of Rama.

In the first quarter of 18th century, at Galata, near Jaipur a great conference of the Ramanandis was held, under the auspices of Sawai Jai Singh. A decision was taken to organize the military wings of the Vaishnava sadhus, called the Naga sadhus. Soon after this event, Govindadas of the Nirmohiakhara established the first akhara of the Ramanandis in Ayodhya.

Abhayaramadas also founded the Nirvaniakhara on Hanumantila. Very soon, all the other Ramanandiakharas were well established in Ayodhya. This provided another impetus to the Hindu claim on the Ram Janmabhoomi site at Ayodhya. Hindus never forgot the site of their greatest hero, Shri Rama. They never stopped trying to regain the temple site which was usurped by Muslims after the destruction of the temple by Islamic invaders.

Hindus never doubted that the site at which Babri Masjid stood was the site where a grand Rama temple once existed. Neither did they doubt that this was where Shri Rama was born. However, during the Muslim rule in India, there was not much they could do. As soon as the Muslim rule weakened Hindus quickened their efforts to regain Ayodhya.

Sawai Jai Singh, the Amer Ruler of early 18th century founded several fortified townships inside many formerly Hindu cities. These townships were called Jaisinghpuras. Their creation was an attempt to regain the Hindu soul of these places.

Records at the City Palace Museum at Jaipur prove that Sawai Jai Singh had created one such Jaisinghpura in Ayodhya too. These documents show that the Rama Janmasthaan was situated in Jaisinghpura, the land of which was acquired by Sawai Jai Singh in 1717 CE. The owner was Shri Rama himself and the site was owned by the Amer State in perpetuity. This was recognized by the Mughal Empire. Even in modern legal terms, the Ram Janmabhoomi site had belonged to the Hindus and not Muslims.

Hindus have always been trying to regain the sacred site of Ram Janmabhoomi at Ayodhya. By 1912, they were in a very strong position. In reply Muslims slaughtered cow near the temple at Bakr-id. This sparked riots and troops had to be called in.

In 1934, riots once again broke out as Muslims tried cow sacrifice in nearby Shajahanpur. In retaliation, Hindu sadhus entered the Babri Masjid and pulled down the enclosure walls and gateways. The metal pinnacles on the domes were removed and one dome was substantially damaged.

In 1948, an inspector of Waqf reports that Hindus and Sikhs do not let Muslims offer any prayers or even let them enter. By 1948 Muslims had no control over the Babri Masjid and the mosque was non-functional.

In 1949, Hindus had been stacking bricks near the site, ready for a shock construction of temple whenever the opportunity arises. On 23rd December 1949 Hindus enter the Masjid and place the icon of Sri Rama inside the Masjid. It was locked for public use of both Hindus and Muslims except on special occasions. The status quo remained until the demolition of the Babri Masjid on 6th December 1992 when finally the Hindus were sick of the administrative procrastination and they took matter in their own hands.

Hindus never abandoned their claim on Ram Janmabhoomi and have always been willing to go to extreme lengths to rebuild a Grand Rama Temple at Ayodhya.

But he will not truly be back until we restore every little temple that was ever destroyed by Islamic invaders. Not only this, the Hindus should resolve that every pagan, polytheistic civilization in the world that was destroyed by the Prophetic Monothesitic forces shall be restored to its former glory and the Hindus shall lead the way. As Shri Goel said things will not be normal until we liberate Al-lat and Al-Manat too. Then truly, Shri Rama will be home.

Krsna’s Opening Remarks in the Gita
Dancing With The Wokes
Matter or Consciousness – What Came First?