The Victim-Perpetrator Bond: The Religious Roots of Genocide – Part II

What abuse was inflicted upon Europeans prior to the fifteenth century that produced in them a drive for domination by violence, provided righteous justification for that violence, and led them to commit genocide and ecocide on a global scale? What happened in ancient Europe before Europeans went forth to conquer, convert and colonize the New World? 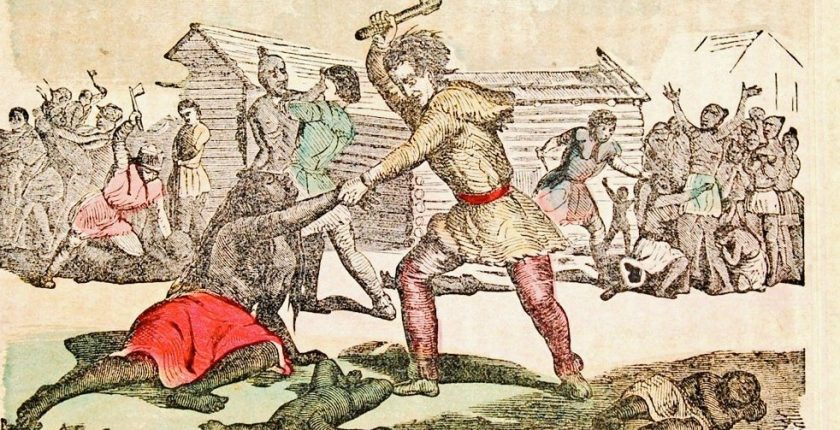 Domination is abuse, and in any situation of domination the abuser is someone who has been abused, as we now understand. The reverse is not true, however: the abused does not have to have been an abuser. Thus the system is open to produce more and more abusers from the endless supply of nonabusers. As the abuse develops, the vicious circle tightens.

Victims who survive violence inflicted on them can become bonded to the perpetrators, and often, but not always, become perpetrators themselves. The suffering engendered by abuse-bonding, or the victim-perpetrator bond, as I will call it, is extremely contagious.

The victim-perpetrator bond has been widely applied to dysfunctional families and addictive relationships, but not yet to the historical record of the human species, nor to grand theological propositions such as the redeemer complex. Applied to the conquest of the New World, however, it suggests that the abusers, the European conquerors, had themselves been abused. Those who came, saw, and conquered had already been conquered.

What abuse was inflicted upon Europeans prior to the fifteenth century that produced in them a drive for domination by violence, provided righteous justification for that violence, and led them to commit genocide and ecocide on a global scale?

What happened in ancient Europe before Europeans went forth to conquer, convert and colonize the New World?

Greed is often cited as the primary motive for European conquest of the New World. The invaders certainly had that, in spades. The conquistadores sailed to the Americas under the sign of Christ, nominally dedicated to the conversion of the savage races, and sent back untold wealth. The tonnage of silver and gold pillaged from the natives is unimaginable, even in terms of today’s billion-dollar statistics. Gold and precious jewels had no commercial value to Native Americans such as the Aztecs and Incas. It was reserved purely for ornamental and sacramental use.

The stolen decor of the New World became the hard capital of the Old. For centuries the Spanish galleons arrived at the mouth of the Guadalquivir River, their spoils barged upriver to the counting houses in Seville where Torquemada, born a thousand years after the murder of Hypatia, launched his mission to save heretics from the error of their ways. The jewel-encrusted cup the pope lifts today to perform Holy Mass before an audience of devout millions is cast from Incan gold. The blood that fills the cup may be imagined in symbolic terms to belong to Jesus Christ, the Redeemer.

But, in historical terms, it belongs to the untold millions of New World natives decimated by the European onslaught, their ways of survival shattered, their holy sites desecrated, their sacred knowledge and practices condemned as heresy. According to the faith, the bread broken at mass is Christ’s body substantiated. But according to history, it is the ravaged body of the earth, the natural paradise plundered for its resources.

Can greed alone explain this behavior, which is, by its own admission, sanctified behavior? If not, perhaps the observation of cultural anthropologist René Girard can provide a clue: “Religion protects man as long as its ultimate foundations are not revealed.” What lies concealed in the ultimate foundations of religion?

For the gnostikoi, skilled in theological debate, the element of the emergent religion that most alarmed them was the redeemer complex. Their own Sophianic model of redemption was a path of consecration to the life of the earth, the mother planet. In the off-planet spin of the redeemer complex they saw a delusion, a deviance for humanity, even a sign of madness.

Experts in theology like Hypatia openly challenged that delusion and countered it by teaching about the divine potential of humankind, nous, and coevolution with Sophia, the wisdom goddess. At the very moment salvationist religion first emerged, it was challenged and countered by people who were highly qualified to analyze and assess what they were seeing, and had alternative views to propose.

In their protest against what they perceived as a grave deviation for humanity, Gnostics did not loose a monster on the world, however. They faced a monster already on the loose, one that had been growing strong for several centuries. It is a monstrous error of the human mind, they argued, to make suffering into a righteous cause for those who inflict it, and a divine, redemptive calling for those on whom it is inflicted. The monster the Gnostics confronted was inhuman, but would make all humanity its instrument. It is the victim-perpetrator bond diabolically exploited, disguised as a love connection, and glorified to the heights of heaven.

Following and co-opting the Jewish tradition of “sacred history,” the salvationist program enforced a linear historical plan upon the entire human species. Joined together, the Old and New Testaments constitute a directive script, a story encoded with beliefs that drive the behavior of those who adopt it. Sanctioned by the redeemer complex, patriarchy had written its own agenda, and attributed the authorship to a vindictive paternal god. The divine father had a plan for conquest and conversion that was to be perpetrated in Europe for a thousand years before its victims, themselves transformed into perpetrators, carried it forth under the sign of the Cross to the New World.