Is ‘Hindu’ the Right Word?

The word ‘Hindu’ is often objected to by many different shades of political ideologies. It is claimed that the word is foreign origin. Based on this premise it is also claimed that India is a British creation. This article delves into these questions of names and identities. 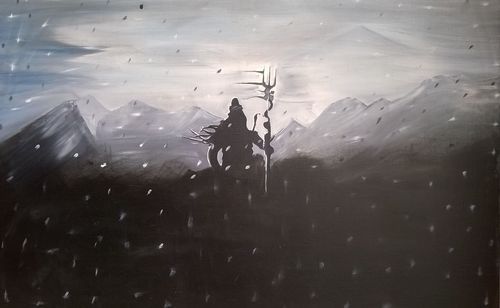 ‘Hindu’ is a word which is often objected to: both by the left-liberals and even by many mainstream nationalists. The disbelief in the word arises from the same historical truth: that the word ‘Hindu’ is not indigenous and it was a name given to us by the others, by the outsiders. Whether it was a corruption of the word ‘Sindhu’ by the Iranians or some other groups in West Asia, who couldn’t pronounce ‘s’ as ‘h’ is now a matter of great debate, but everyone agrees that the word itself is foreign in origin.

The Left believes that since the word itself is foreign in origin, hence there is no such thing as the Hindu society, or Hinduism. Mistaking the name for the entire civilization, they dispense with the very idea of India and proclaim India as a British creation. They mistake the word for the people, and proving former’s foreign origin, they reject the very existence of the latter. This line of argument is so spuriously ridiculous that no further comment is needed on it.

Many Nationalists believe that since the name is foreign in origin, so we should completely reject it and use the name only ‘Bharat’ for our country and ‘Sanatana Dharma’ and ‘Sanatani’ for referring to our Dharma and our people.

This is a problematic position. There is no doubt that Sanatana Dharma is the correct phrase. But the word ‘Hindu’, and the phrase ‘Hindu Dharma’ are quite useful, easy and we have been using them for the past few centuries very consciously to identify ourselves. It would be a disaster to abandon this binding term in face of much adversity, when we face the threat of increasing faultlines in our society.

What is most curious is that fact that this phenomenon of knowing ourselves from a name given by others is not peculiar in the case of India, but is so universal in the case of all civilizations, that it is more of a norm rather than an exception.

Here are a few examples:

It is often the case that a group, while communicating within the group, is seldom conscious of its oneness. Dealing with their inner problems the followers of this group are more occupied with their differences than similarities. It is the outsiders who see them as a group, as a single unit and thus give them a name, which later sometimes comes to define the ‘in’ group. There is nothing odd about it.

In fact, it is a greater proof of the oneness of our civilization. If the out groups see us as ‘one’, it means it is an objective endorsement of our ‘oneness’. It is more of a reason to feel united. The word ‘Hindu’ is a binding agent, speaking politically, culturally and socially. Abandoning it for the more cumbersome and lighter ‘Sanatani’ will be disastrous in heavily charged times as these.

What does Hindu dharma say about violence?
What is Wrong in India becoming a Hindu Rashtra?
Ayodhya: The Concept of the Sacred Kshetra