In this brilliant piece of satire, Satish Verma takes a dig at the charge of Fascism that its omnipresent opponents from the liberal Left often level at the Hindu society. The Hindu movement is often referred to as Hindu Fascism. The sheer ridiculousness of the charge becomes obvious from this satire. When the charge is outrageous, satire is the best way to expose how untenable it is. 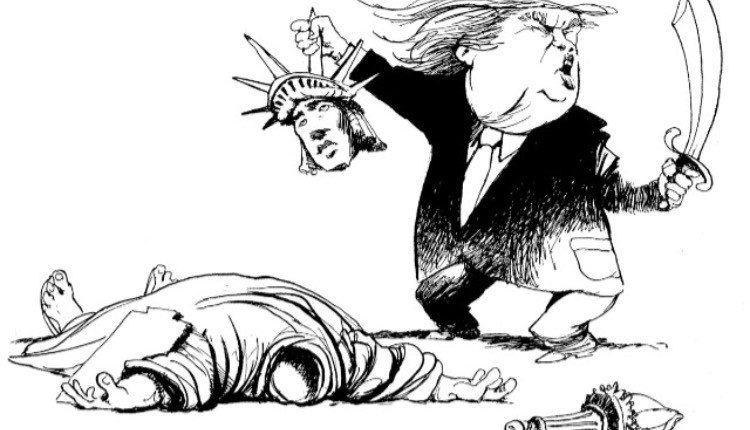 The terror of the Right Wing Fascism is rearing its ugly head across the world, dismantling the regime of truth built on the robust foundation of Marxism, Liberalism and Postmodernism.

In India, the Muslim women who are very embodiment of truth, justice and virtue, who never think about themselves, but always make themselves available for the community have emerged as the formidable challenge to Hindu Fascism in India.

In USA, Nancy Pelosi tearing the State of the Union address is the most powerful statement against Fascism since the battle of Stalingrad. In UK, the resistance against Fascism will soon be built by scores of teenagers. These teenagers had migrated to ISIS in 2014-15, competing for higher education in indoctrination, elimination of Kafirs and the establishment of Sharia. But now, they are looking forward to return to UK to launch resistance.

The striking similarity between Fascism of today and Fascism of 20th century may not be visible to a right wing bigot but a liberal who has imbibed the values of postmodernism will instinctively know that in the subjective regime of truth, Fascism is already well established. Fascism was muscular, outspoken and overt in nature in 20th century but Fascism of today is abstract and covert which makes it much more dangerous.

The experience of going to Gulag camps for opposing Communism or being sent to Concentration Camps for opposing Nazism was nowhere close to the online internet trolling imposed on feminists and liberals seeking to fight Fascism on Social Media. The bigots from Right Wing can again question why Fascism is being fought on social media by posting about moving testimonials of Comrades being detained and released in couple of hours safely. The answer is unambiguous and straightforward: the source of Fascism emanates from Social media and it’s reinforced on Social media by people as competent as Goebbels.

When LGBTQA+ Activists support the Muslim women reading Kalima, they’re merely following in the footsteps of Foucault showing that the truth of LGBTQA+ regime will be different under Sharia Law. A gay being stoned to death under Sharia law will be understood by the gay in a different way, rooted in the deep cultural and historical context emboldened by intersectionality.

As there is no objective truth, we can never be certain if it is stone or rose petals as direct perception has limited utility in validating the experience of sexual minorities.

Like the Orwellian Newspeak, Liberals of India are meticulously working on developing Liberal Newspeak in which the fascists will be asked to understand the true meaning of words uttered by Muslim fanatics like Sharjeel Imam to challenge the power structure. At the end of the day, language is based on the power structure of the society.

When Sharjeel Imam says that ‘Chicken Neck’ should be cut-off from India, the liberal Newspeak will remove the noises by using Fourier Transformation and direct Fascists to understand it as a Muslim exercising his right to eat chicken in a Fascist India where there is vegetarian terror unleashed by the government and its supporters.

In Liberal Newspeak, Allah can mean all the gods combined together but it must be a single god and Muslim women reading Kalima to challenge Citizenship Amendment Act are reiterating their commitment to Secularism emanating from the glorious tradition of French Revolution which is sometimes termed ‘coup’ by Fascists.

The clairvoyance of Literalism lies in identifying Fascism which exists on a mental plane, (though not physically manifest) and it demands a call for the action. Being the epitome of virtue and justice, it’s the moral imperative of liberals to seek glory by fighting Fascism mentally which is epistemologically consistent as well.

Truth of one person can’t be greater than other person, provided the person has the long history of commitment to liberalism otherwise the subjective truth and fear mongering of Fascists don’t have any significance. The world may be moving from democracy to Fascism but Fascism is visible to Liberals only and the only available path forward is to convert to Liberalism en masse.