Eternal Words of the Vedas

In this excerpt, from Veda Mimansa, Volume I, Shri Anirvan discusses the notion of the eternality of the words of the Vedas. He discusses the age old debate between the Mimansakas and the rationalists, in which the Mimansakas claim that the very words of the Vedas are eternal and not just the meaning, and the rationalists consider only the meaning is eternal. In this brief excerpt, Shri Anirvan navigates through this debate and in the process interprets the origin of language and the importance of the Vedas. 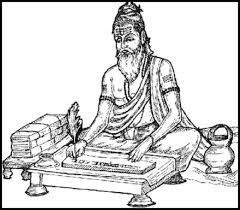 Another characteristic of the followers of the Veda is the belief that the utterances of the Veda are eternal. This is not the belief of the Veda-followers alone. All the religions of the world have claimed their tenets to be divine utterances and so to be eternal. The religions that believe in Prophets, even though have been compelled to admit that the words of their Prophets were humanly articulated, yet it is their emphatic assertion that these were in reality the expressions of some original divine utterances. There is a logical connection between the trans-human (Apauruseyatva) or the supra-natural (Alaukikatva) with the perennial (Nittyatva).

In fact, both these ideas arise from the urge to attain transcendence. In the mundane lives of men too, the urge for transcendence is present. We are caught floating in a turbulent change. Amidst this, our individual selves need a firm anchor which we cannot do without. As in the external world we would put our trust in the functioning of nature, so we do need a stable foundation of an immutable spiritual functioning in our heart. Our consciousness needs such a site, which may be called the repository of all the yearnings of our natural being, a reliable source of all its activities.

When this spiritual edifice is viewed outwardly, it is called Isvara and when inwardly, the Atma. The words that surge up from the profound depth and that which transports our action and thought from the sway of doubt and uncertainty to a plane of stability are the utterances of the Reliable(Apta), or scriptures or the Veda. Thus the eternality cannot be measured only through universal pervasion or through generalization (Vyapti). Rather it ought to be said that the unrestrained capability of a thing to accomplish its real objective is the eternality.

It is obvious that this eternality is Bhagavata (divine) and always accompanies the faith. There is no ground for objection if the general characteristics of spiritual expression is christened as eternal. But if the words in their formal expression were also called eternal then this leads to problems. To the Mimamsakara, the Veda and the Words are one and same. Therefore, he claims that it is not only the meaning of the Veda that is eternal, but also its Words.

Needless to say that the rationalists did not agree to this view. It does not appear that the composers of Mimamsas were able to counter the arguments of the rationalists properly. Here too the earnestness with which they wanted to prove the words to be eternal did not arise merely as a reactive endeavor to protect their doctrine from the onslaught of the rationalists. This point needs a little bit of elaboration.

There is a unique theory in the philosophical systems in this country that the attribute of space is Words. From the standpoint of modern physical science this would seem invalid. In order to validate the statement even the ancient logicians had to finally take recourse to the Parisesa Nyaya. (The law of the remainder or elimination of all other possibilities).

In fact, the origin of this theory lies in the doctrine of Vak in the Vedic literature. There of course, this theory wears a different look. The Rgveda says: ‘The Vak in its fiery form is established in that supreme void of imperishable syllable (Aksara) where is spread the eternal abiding seat of the Visvadevata (the all-God/Universal God). It is here that the one-syllabled Vak gets transformed into a thousand-syllabled one. She is the animated Gauri. It is she who has created forms by carving the primeval water (Karanasalila). Vak has four feet. Three of them lie hidden in the cave and have no external manifestation. It is the fourth Vak (Caturthi) that gets articulated through the mouth of man. Flowing from the inaccessible transcendental ocean, Vak is the outflow of divine consciousness in this world. ‘The luminous plane (Akasa) is the Brahman’, this statement we find in the Upanisad. The Rgveda says that from that Absolute (Brahman), the Word (Vak) is inseparable. The luminous space (Akasa) and the life (Prana) as well as the luminous space and the word (Vak) are the eternal divine couple. The philosophical expression of this Vedic notion is: ‘Word is the attribute of Sky’.

When viewed from this angle, the statement does not seem to be an illogical one. In the language of the philosopher, we can say that the space or the void is at the source of creation. But that Void is not without energy. The vibration of the non-vibration is the essence of that energy. When consciousness moves upstream, it finally gets still in non-pulsation. But in its downstream journey, even though the non-vibration retains itself intact, the pulsation appears in it. This pulsation is Vak or Sphota, that which is the un-struck (Anahata) murmuring of the wordlessness or the self-articulation of the formless in form.

There are four steps in this process of radiation of the Vak from the luminous plane (Akasa) or the supreme void (Mahasunya). In the first stage Vak is just like the vibration of delight arising from eternal harmony in the joyous ocean of transcendence. And then the impulse for that wonderful enjoyment of one’s own self produces in that vibration a yearning for form. Vak in that state is the golden ray of light flashing on the mirror of self-consciousness. Vak then gets articulated in thought and then in phonation of words.

The consciousness of a philosopher-poet gets manifested in poetry, and there blossoms the luxuriant articulation of significant words (Vani) from the depths of the inwardly wrapped (Avritacaksu) consciousness. In the world of phenomena, the creation of poetry alone is true creativity. In that, the creator effuses himself free from the warp and woof of his own self (Sva-tantra). The rest are not creation (Srsti) – they are mere artifices (Nirmana). In creation the efficient and the material causes are inseparable.

There I go on unfolding my own entity like a blooming flower urged by the hidden life force in the innermost recesses of my being. This I can do only through the direct experience of emotion. It is there that I can witness immediately the joyful play on creation (Srstilila) of Prajapati. Whatever gets manifested in the inwardly wrapped consciousness under the trance of creativity and is expressed in verbal form is what the Mantra is.

In the language of the Veda, the Mantra is the embodiment of the creative power of the seer (Kavi-Kratu). In the other words, it is a vision, and at the same time, a creative urge as well. The process of creation begins first at the receptacle of the seer of the Mantra (Mantradrasta) himself; then it moves on to the successive generations who are willing to receive and are free from envy; and then on to the entire world. In course of time, the vigor and the force of the Mantra increases and there emerges the succession of various sects.

Finally, after unceasing exertions of many ages it gets imbued into the consciousness of a nation. And then the uttered words (Vaikhari Vak) attain the status of ‘the mantra endowed with sanctity and mystic potency’ (Siddha Mantra). All the Mantras possess permanence of meaning; but over and above this, the Siddha Mantra also possess an eternality that precedes the manifestation.

The quintessential carvings of Konarak: where Architecture speaks the Language of Astronomy
Cultural Self-Alienation of Hindus
Importance of Hindu Festivals