Bharata reached the ashram and fell down at his brother’s feet and as a reaction, Sri Ram lifted him up with intense care. Seeing Bharata and Rama’s undying love for each other, the extreme gentleness and the sweet exchange of words, everybody present there were wondered and delighted at the same time. 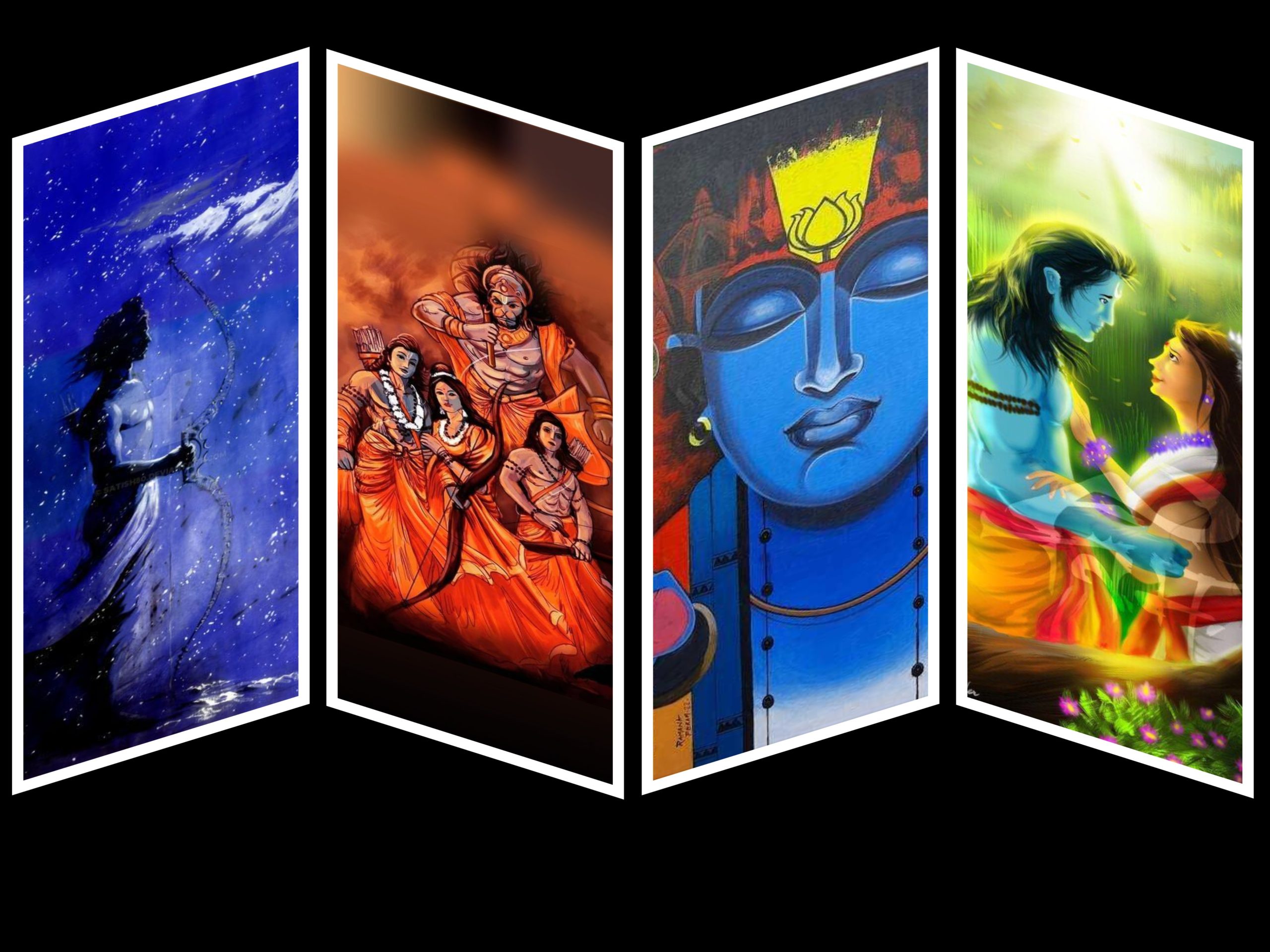 Rama as a king:

Sri Ramachandra’s efforts to keep his subjects happy in every possible way and being an exemplary king is evident by the way he treated his subjects with love and affection- more than his own child! He was always engaged in thinking about their best interests. That is why the people of Ayodhya had great admiration for him. Lord Ram’s visit to the forest, meeting with the subjects of Ayodhya at Chitrakoot and ultimately while leaving the earth it is seen that from the beginning to the end, everyone from high to low castes had a wonderful appeal and need for Sri Ram. Even, they were ready to sacrifice their lives for him in any situation. The separation from Lord Rama was unbearable for them.

At the time of Sri Ramachandra’s departure to the forest, most of the population came out and were ready to accompany him in his days of exile.  Lord Sri Rama made many requests to them. Finally, Rama had to leave them while they were in deep sleep. It is said in the description of original Valmiki Ramayana that even the animals and birds were so much fascinated by his love that the absence of Shri Ram became intolerable for them too. Also, Shriram who madly lamented like an ordinary worried and depressed man without Sita, left her for others’ happiness though he very well knew that she was innocent. From all these examples his ideals can be understood.

Rama as a lover:

Keeping that era in mind and considering his position in the society, Sri Rama’s commitment to one wife only is also an unique instance to see. He could not think of any other woman except Sita even in his dreams. After sending Sita to the forest, as per rituals and traditions, he had an immediate need for a wife to perform his important Yajna ceremony. For that, breaking the rules he made a golden idol of Sita. He has proved that celibacy is not only just a religious law for women, but also it is the “vow of one marriage” an absolute necessity for men too. The relationship between man and woman is not only meant for pleasure but also essential for spiritual practice.

Moreover, his unwavering love for Sita can be understood by those who have read or heard recitation on the context of Sita’s abduction by Ravana and its following verses. Sri Rama was a great warrior and hence also calm and patient, but at that time he broke down extremely due to “sita biraha” or detachment from Sita and same as an ordinary man he wandered here and there, heartbroken like crazy, asking all the animals, birds and hills and mountains that came on his way, about her with full of tears in eyes. Eventually, he fell on the ground with excessive grief and cried out “Ha Sita!”.

His love for his brothers:

Again, in this role also he is incomparable. From childhood and also since the time they all were under training for horse riding together, whatever he got to eat he offered that to his brothers first. Lakshmana was so close to him that he never left his elder brother alone for a moment. He accompanied him while fighting demons and returned Ayodhya getting married at the same time. Next, Bharat and Shatrughan, who were in the other city also joined them in their mission and worked for the people of their kingdom following their father’s instructions. This made every sage and householder impressed by their good qualities and behavior.

During the time of coronation Rama addressed Lakshmana saying the following verses:

This means, “Lakshmana, rule and enjoy this world with me as my second soul. Only for you I am accepting all my privileges”.

Also, he trusted his other brother Bharata so much that during his departure from her mother Kaushalya, ignoring what Kaikeyi had done with him, he assured her saying, “Mother, be patient. I know, Bharata will serve you like me”. And at that time, to keep Sita safe at home he told her,

Again, hearing the news of Bharata visiting Rama in the forest, Lakshmana started to accuse him with many unacceptable words. But, Rama began to praise Bharata with the following words to remove Lakshmana’s false allegations.

That means, “Lakshmana, only for all you brothers I wish to accept every worldly pleasures and perform my Dharma. Touching the scriptures, honestly, I reveal that I aspire to gain the kingdom only for the good and happiness of the brothers. O my humble brother, if I get any happiness denying you all, let that reward burn down to ashes in fire”. He continued saying, “Bharata can never think of going against me. Now, if you have a strong desire to get the kingdom, then I will inform Bharata and make arrangements for it.”

The doubts that had appeared in Lakshana’s mind were dispelled as soon as he heard the above words. After that, Bharata reached the ashram and fell down at his brother’s feet and as a reaction, Sri Ram lifted him up with intense care. Seeing Bharata and Rama’s undying love for each other, the extreme gentleness and the sweet exchange of words, everybody present there were wondered and delighted at the same time.

Later, once, while fighting the Rakshashas, Lakshmana fell on the ground losing consciousness hit by Ravana. Then Sri Rama lamented in the following way:

This means, “The way the strong Lakshmana had followed me in my exile, now, I wish to follow him to the afterlife in the same way. He was always dear to me and my eternal follower. Alas! these demons had left him collapsed in such a cunning play”.

As he was asked to halt for some time in Lanka during his preparations of returning to his motherland by Bivisana, Rama addressed him saying:

This means, “O king of the Rakshahas, it is not that I do not wish to accept your invitation, but at the same time I am also anxious to see my brother Bharata, who came to the Chitrakoot mountain and bowed down and prayed to me for taking me back. However, I did not listen to him at that time. Now, how shall I delay my pleasure to meet him?”.