To be better informed about our Dharma and the epic, this book is an excellent work that has also ultimately shattered all the popular fallacies successfully. Besides being well-structured, the book has a sufficient drive to make us, the readers to be curious enough to peep inside the glorious universe of Mahabharata and read the original version at least once in our lifetime. 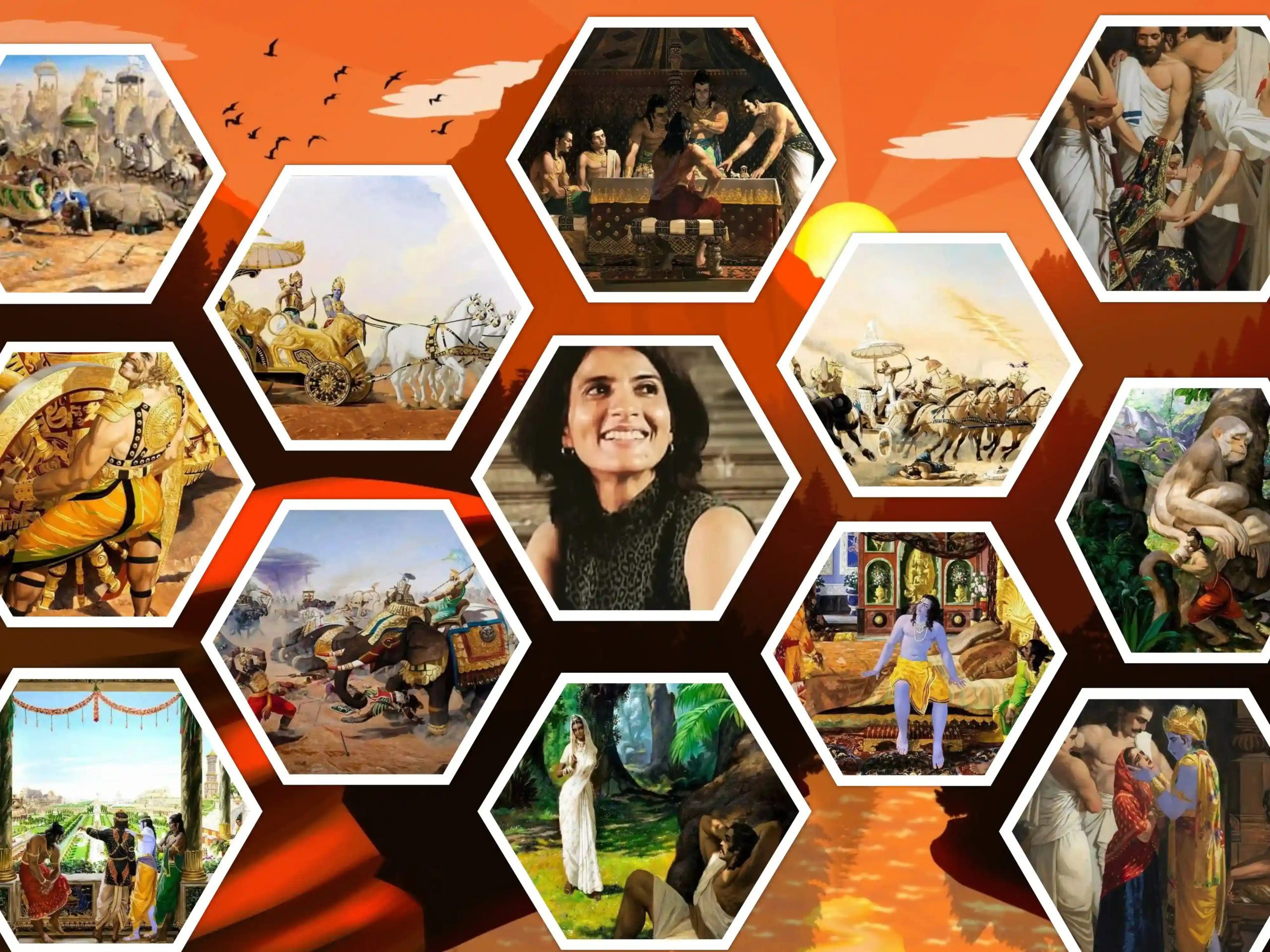 In this era, where most of us are introduced to Mahabharata only through media, children’s stories and T.V. serials, the book is a fact-based approach to the original Ved Vyasji’s version. The author has divided the book into parts where she describes the context, people, personalities, events and the ins and out. For this, she has taken Gita Press Mahabharta, BORI critical edition of Mahabharata, etc. as references.

After providing the summary storyline, the book starts with defining the most misunderstood term of today i.e. “Dharma”. Explaining the details of “Dharma” the chapter ends with realizing the primary message of Mahabharata is to understand the subtle shades of dharma and apply that to uplift our own selves. Next, the plot where Mahabharata was narrated for the first time is given and from here some important points to note are the types of yajna and “who were sutas?”. The latter point is vital to understand as most of the time people associate injustice done on Karna due to his Suta background. The Sutas were those communities who were born of Khsatriya fathers and Brahmin mothers who mostly took careers as charioteers apart from being storytellers, history recorders and ministers. Besides Karna, Sanjaya, the wife of Raja Virat Sudhesna, Keechak were also notable Sutas. This makes Karna get no less privilege than others to learn from Dronacharya, as commonly propagated. It was his audacity and incompetence to learn Brahmastra that made his master dismiss him from his class.

Many can find the family tree of Puru Dynasty to Janmeya, a little bit difficult to understand. But the author has wonderfully helped us to get a vivid picture of the Bharat dynasty list with a chart. Also, the map of Bharatvarsha with both pictorial and texual references, the kingdoms which took part in which side of the war and an idea of Akshauhini, the measurement of the army of that time makes us note that the events of Mahabharata whose epicenter was mainly Indraprastha and Panchala jolted the entire Bharatvarsha. Hence, the story is not region-specific. In the next chapter on Sanjaya informing Dhritasratra about the war, the most important thing to realize is that it was never that Sanjaya was standing in front of Dhritarashtra and watching the whole episode of war as live telecast in front. Rather, he himself participated in the fight, kept the records updated Dhritarashtra from the tenth day of the war.
We know, the epic comprises many strong female characters but the author also includes the side stories of Savitri and Shakuntala. Savitri’s character reminds us how responsible and sensible the ancient Indian women had been who had the courage and dare to challenge death also. Shakuntala was quite straightforward and outspoken instead of what we have known her as shy and subdued till now. Here, we also find knowledge about various types of marriages in ancient India from the book.
Another most wrongly depicted character of today’s time is Karna. Though many of us favour him due to the injustice that happened to him and relate with misfortunes he faced in life, but we must not forget that he was actually jealous on Arjuna and that made him misled his friend Duryodhana. He asked Dusshashana to humiliate Draupadi in front of the crowd and addressed her as a prostitute. Even, not in a single instance, he had even won against Arjuna in life whenever the two faced in front of each other although his bravery and skills are unquestionable.

Coming to Draupadi’s character, it can not be denied that we carry lots of misconceptions about her being aggressive and melodramatic. The notions generally come due to watching T.V. serials and other fictional works done on Mahabharata. Once Satyabhama asked her what magic she knows that has kept the Pandavas always captivated for her. From her reply, it is evident that it was not only her looks but the overall personality of how she takes care of every minute aspect of her house-holding, moods of every husband, seniors, servants, workers, guests with proper discipline without a fail every day that has made her so demanding. It is to be reminded, that while she came for the first time and the Pandavas were in dilemma about who should handle her, it was Yudhisthira who came to a logical conclusion, not Krishna as we see from the serial’s episodes. She maintained such a strong bond with her husbands and among everyone that Arjuna accepted that all the five brothers, Krishna and Draupadi are different bodies with one heart. She was not as revengeful and of a low-mind set as we are taught since from the original version of Mahabharata we do not find any mention of her asking for Dushashana’s blood to wash her hair or taunting Duryodhana as “andhe ka putra andha”.

In the subsequent chapters, Ami Ganatra, with simple words on tussle between Dharma and Adharma has again put the justifications behind the killing of Karna and Duryodhana in a treacherous way from the conversations with Krishna. Thus, she connects us with ancient logic with the 21st century perspective. Further, Kunti was not only a mother of warriors but also remained a warrior from the inside in her whole life. Regarding Arjuna and Krishna’s friendship, it was Dharma that bonded both of them as the cornerstone.

Though many parts of Mahabharata are ignored by the author, but she never forgets to remind us of some of the vital and interesting points. The defense strategies undertaken to protect city of Dwarka, Arjuna’s other ten names, Krishna’s important pieces of advice in every step of the war, Yudhisthira’s wisdom shown against Yakshna Prasna that saved his brother’s lives, namesakes and their dilemma, some fantasy side stories relevant to the plot with universal morals, Vyuhas or army formations, a summary of Bhishma’s teachings on death-bed and Vidura Neeti are actually an interesting read. Moreover, we all are well aware of Abhimanyu and Ghatotkacha but the author also introduces us to the other sons of Pandavas who are not that popular.
Maximum of us are aware of the Bhagavat Geeta teachings, but reading the advices of Bheesma and Vidura given to Yudhisthira was the first time for me. Both the teachings are universal and I feel that they should be more spread and popularized. At the same time, I felt proud thinking about how much understanding of society with soul and effort our ancestors might have possessed that have made our civilization sustain for a prolonged time following the teachings of Mahabharata. Bhisma’s teaching are at state or administrative level and on the other hand Vidura’s lessons are mostly inclined towards indiviudal behaviour. After completeing Bhisma’s section and while reading Vidura’s part, I personally felt that these two personalities can be compared. At least, Pitamaha could have remained true to himself despite all the commitments. However, the writer might have already read the reader’s mind and made a little comparison in the end of Vidura’s story. Both were loyal to Dharma and the kingdom but Vidura surpassed a lot in remaining true to the former one. This made him a free man unlike Bhisma who gained freedom only after he could breath his last. Thus, the reflections on every character from the book will finally leave us look thoughtfully on them for a long time. To be better informed about our Dharma and the epic, this book is an excellent work that has also ultimately shattered all the popular fallacies successfully. Besides being well-structured, the book has a sufficient drive to make us, the readers to be curious enough to peep inside the glorious universe of Mahabharata and read the original version at least once in our lifetime. Great fact explosion!