The Building of Jaipur: Work in Astronomy

Almost all the Rajput princes have a smattering of astronomy, or rather of its spurious relation, astrology; but Jai Singh went deep, not only into the theory, but the practice of the science, and was so esteemed for his knowledge, that he was entrusted by the emperor Muhammad Shah with the reformation of the calendar. 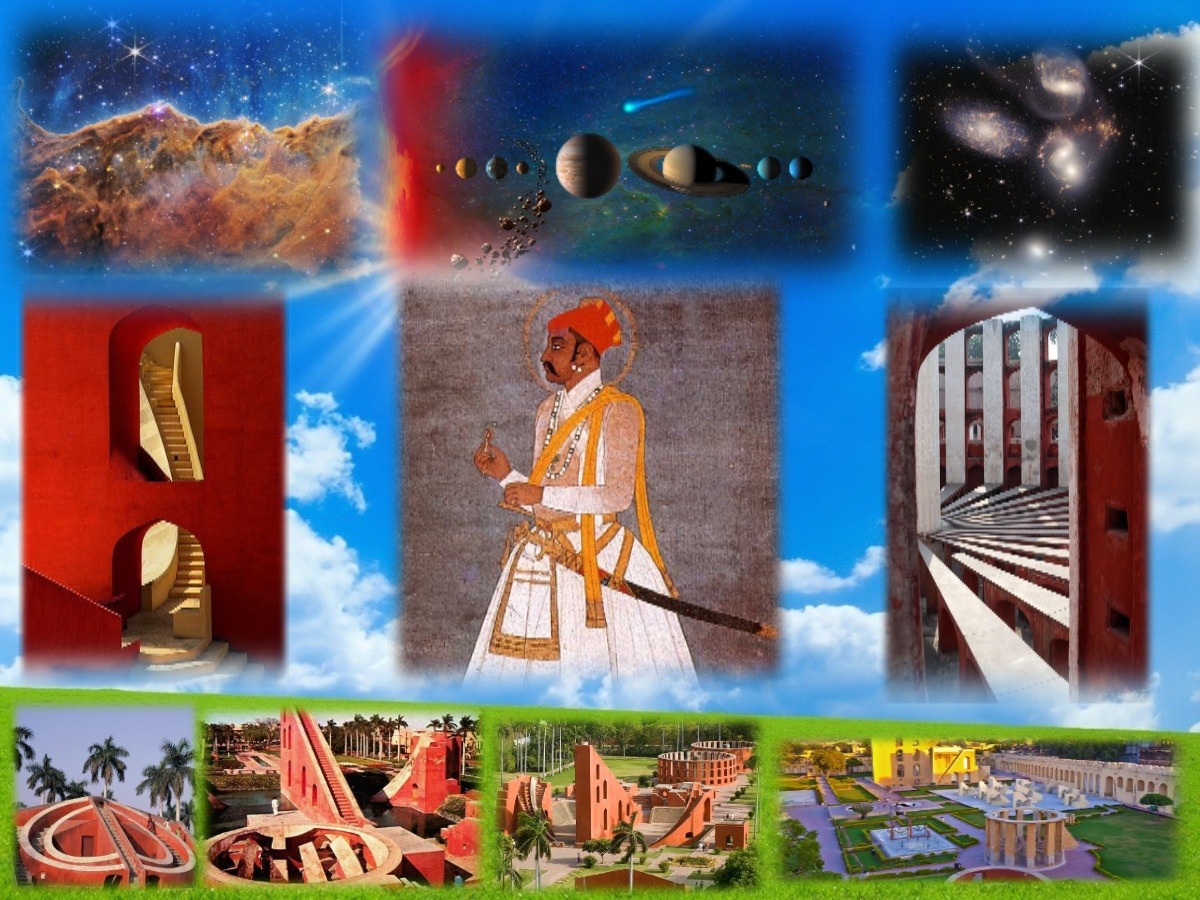 The Building of Jaipur: Work in Astronomy – As a statesman, legislator, and man of science, the character of Sawai Jai Singh is worthy of an ample delineation, which would correct our opinion of the genius and [357] capacity of the princes of Rajputana, of whom we are apt to form too low an estimate. He was the founder of the new capital, named after him Jaipur or Jainagar, which became the seat of science and art, and eclipsed the more ancient Amber, with which the fortifications of the modern city unite, although the extremity of the one is six miles from the other. Jaipur is the only city in India built upon a regular plan, with streets bisecting each other at right angles. The merit of the design and execution is assigned to Vidyadhara, a native of Bengal, one of the most eminent co-adjustors of the prince in all his scientific pursuits, both astronomical and historical.

Almost all the Rajput princes have a smattering of astronomy, or rather of its spurious relation, astrology; but Jai Singh went deep, not only into the theory, but the practice of the science, and was so esteemed for his knowledge, that he was entrusted by the emperor Muhammad Shah with the reformation of the calendar.

He had erected observatories with instruments of his own invention at Delhi, Jaipur, Ujjain, Benares, and Mathura, upon a scale of Asiatic Grandeur: and their results were so correct as to astonish the most learned. He had previously used such instruments of those of Ulugh Beg (the royal astronomer of Samarkand), which failed to answer his expectations. From the observations of seven years at the various observatories, he constructed a set of tables. While thus engaged, he learned through a Portuguese missionary, Padre Manuel, the progress which his favorite pursuit was making in Portugal, and he sent. “Several skillful persons along with him” to the court of Emanuel. The king of Portugal dispatched Xavier de Silva, who communicated to the Rajput prince the tables of De la Hire. “On examining and comparing the calculations of these tables (says the Rajput prince) with actual observation, it appeared there was an error in the former, in assigning the moon’s place, of half a degree; although the error in the other planets was not so great, yet the times of solar and lunar eclipses he found to come out later or earlier than the truth by the fourth part of a ghari, or fifteen pals (six minutes of time).” In like manner, as he found fault with the instruments of brass used by the Turki astronomer, and which he conjectures must have been such as were used by Hipparchus and Ptolemy, so he attributes the inaccuracies of De la Hire’s tables [358] to instruments of “interior diameters.” The Rajput prince might justly boast of his instruments. With that at Delhi, he, in A.D. 1729, determined the obliquity of the ecliptic to be 23° 28°; of what it was determined to be, the year following, by Godin. His general accuracy was further put to the test in A.D. 1798 by our scientific countryman, Dr. W. Hunter, who compared a series of observations on the latitude of Ujjain with that established by the Rajput prince. The difference was 24°; and Dr. Hunter does not depend on his own observations within 15. Jai Singh made the latitude 23° 10’ N.; Dr. Hunter, 23° 10’ 24° N.

From the results of his varied observations, Jai Singh drew up a set of tables, which he entitled Zij Muhammadshahi, dedicated to that monarch; by these, all astronomical computations are yet made, and alamanacks constructed. It would be wrong – while considering these labors of a prince who caused Euelid’s Elements, the treatise on plain and spherical trigonometry, ‘Don Juan,” Napier on the construction and use of logarithms, to be translated into Sanskrit – to omit noticing the high strain of devotion with which he views the wonders of the “Supreme Artificer”; recalling the line of one of our own best poets:

An undevout astronomer is mad.

The Rajput prince thus opens his preface; “Praise be to God, such that the minutely discerning genius of the most profound geometers, in uttering the smallest particle of it, may open the mouth in confession inability; and such adoration, that the study and accuracy of astronomers, who measure the heavens, may acknowledge their astonishment, and utter insufficiency. Let us devote ourselves at the altar of the King of Kings, hallowed be his name! in the book of the register of whose power the lofty orbs of heaven are only a few leaves; and the stars, and that heavenly courser the sun, small pieces of money, in the treasury of the empire of the Most High.”

“From inability to comprehend the all-encompassing beneficence of his power, Hipparchus is an ignorant clown, who wrings the hands of vexation; and in the contemplation of his exalted majesty, Ptolemy is a bat, who can never arrive at the sun of truth; the demonstrations of Euclid are an imperfect sketch of the forms of his contrivance.”

“But since the well-wisher of the works of creation, and the admiring spectator of the works of infinite wisdom, Sawai Jai Singh, from the first dawning of reason in his mind, and during its progress towards maturity, was entirely devoted to the study [359] of mathematical science, and the bent of his mind was constantly directed to the solution of its most difficult problems, by afraid of the Supreme Artificer, he obtained a thorough knowledge of its principles and rules,” etc.

Besides the construction of these objects of science, he erected, at his own expense, caravanserais for the free use of travelers in many of the provinces. How far vanity may have mingled with benevolence in this act (by no means uncommon in India), it was uncharitable to inquire; for the Hindu not only prays for all those “who travel by land or by water,” but aids the traveler by serais or inns, and wells dug at his own expense, and in most capitals and cities, under the ancient princes, there were public charities for necessitous travelers, at which they had their meals, and then passed on.

Assassination of Farrukhsiyar, May 16, 1719. –When we consider that Jai Singh carried on his favorite pursuits in the midst of perpetual wars and court intrigues, from whose debasing influence he escaped not untainted; when amidst revolution, the destruction of the empire, and the meteoric rise of the Maharattas, he not only steered through the dangers, but elevated Amber above all the principalities around, we must admit that he was an extraordinary man. Aware of the approaching downfall of the Mogul empire, and determined to aggrandize Amber from the wreck, he was, nevertheless, not unfaithful to his lord paramount; for, on the conspiracy which deprived Farrukhsiyar of empire and of life, Jai Singh was one of the few princes who retained their fidelity, and would have stood by him to the last, if he had possessed a particle of the valor which belonged to the descendants of Timur. 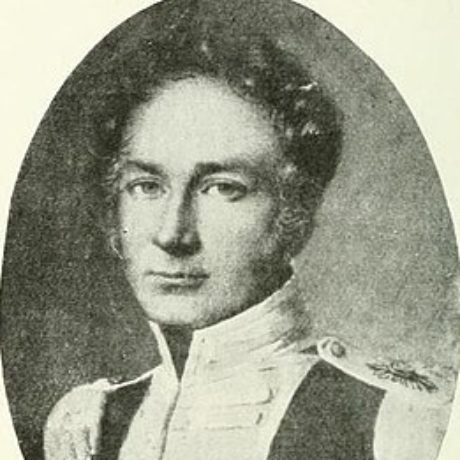 Lieutenant-Colonel James Tod (1782 – 1835) was an English-born officer of the British East India Company and an Oriental scholar. He combined his official role and his amateur interests to create a series of works about the history and geography of India, and in particular the Rajasthan. Tod published a number of academic works about Indian history and geography, most notably Annals and Antiquities of Rajasthan, based on materials collected during his travels. He retired from the military in 1826, and married Julia Clutterbuck that same year. Tod's major works have been criticised as containing significant inaccuracies and bias, but he is highly regarded in some areas of India, particularly in communities whose ancestors he praised. His accounts of the Rajputs and of India in general had a significant effect on British views of the area for many years.