Indian society presents to us no more fascinating picture than that of the craftsman as an organic element in the national life. Broadly speaking, he is associated with that life in one of three ways: as a member of a village community; as a member of a guild of merchant craftsmen in a great city; or as the feudal servant of the king, or chieftain of a temple. 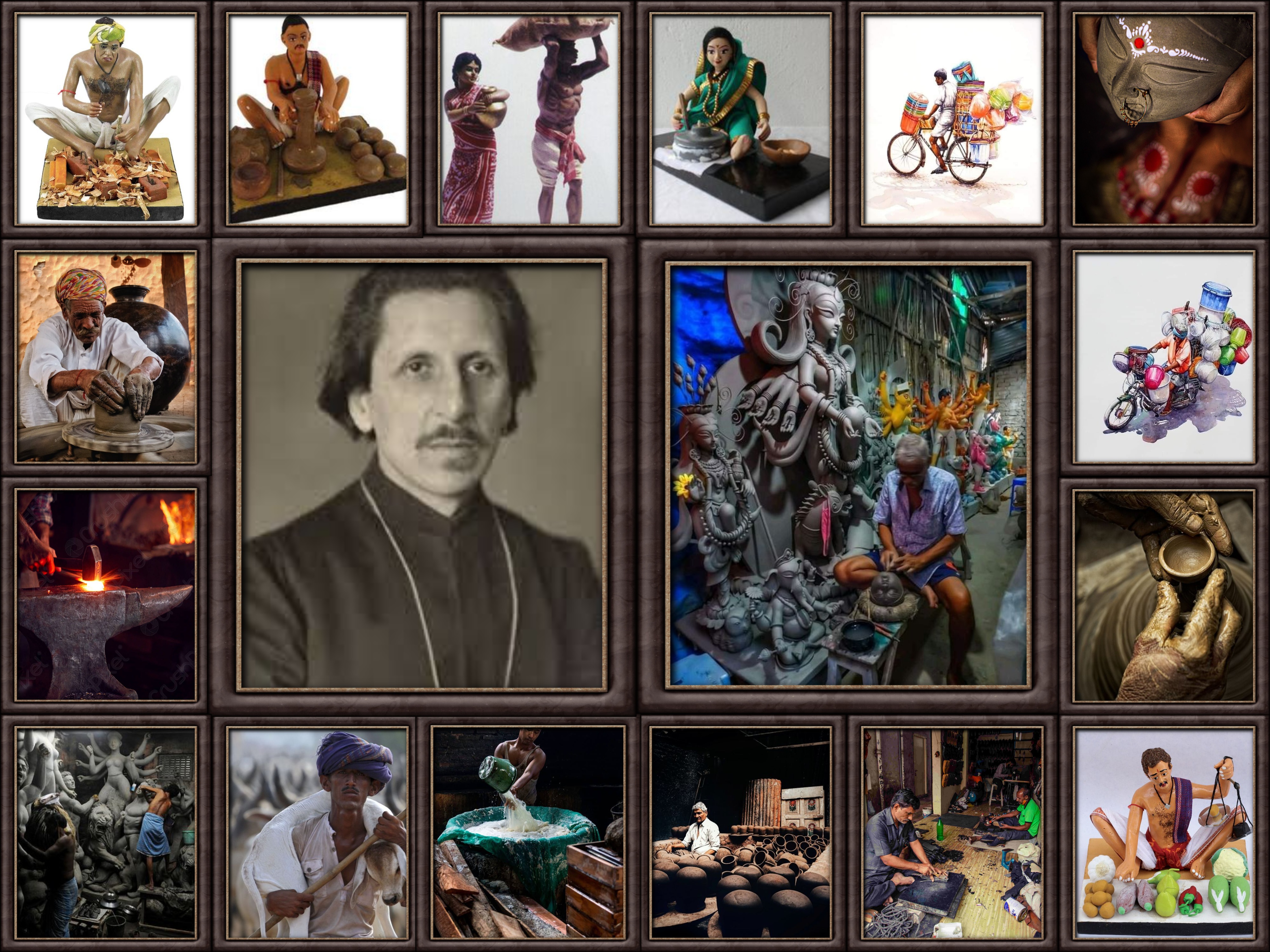 Indian society presents to us no more fascinating picture than that of the craftsman as an organic element in the national life. Broadly speaking, he is associated with that life in one of three ways: as a member of a village community; as a member of a guild of merchant craftsmen in a great city; or as the feudal servant of the king, or chieftain of a temple. First let us enquire into the position of the lesser craftsmen, within the agricultural village community.

The craftsmen thus working within the village community, are there in virtue of a perpetual contract whereby their services are given to the husbandmen, from whom they receive in return certain privileges and payments in kind. Each has his own duties to perform.

The woodwork of ploughs and other implements is made and repaired by the carpenter, the cultivator merely supplying the wood;the blacksmith supplies all the iron parts of the implements, and repairs them when necessary, the cultivator supplying the iron and charcoal, and working the bellows; and the potter supplies each cultivator with the earthenware he needs. The list of artisans is not always the same, only those most indispensable to the community being found in all cases, such as the carpenter and blacksmith, potter and washerman. Others may be the barber-surgeon, messenger and scavenger, astrologer, or dancing girl. It will be seen that not all of these are technically craftsmen, but all occupy their position in virtue of the professional service which they render to the agricultural community. This is well illustrated by a verse of a fifteenth century Sinhalese poem dealing with the origin of caste as a method of division of labor. The verse in question emphasizes the indispensable character of the services of the carpenter, tailor, washerman, barber and leather-worker.

“Both for the weddings and funerals of Rajas, Brahmans, cultivators, merchants, Sudras and all men – the carpenter giving chairs, bedsteads, pavilions and the like – the tailor sewing and giving jackets and hats – the washer spreading awnings and bringing clean clothes – the barber cutting the hair and heard, trimming the face and adorning it – the leather-worker stitching leather for the feet; thus these five are needed (alike) for the wedding and the funeral.”

They are, indeed, in Ceylon, often spoken of as “the five servants.”

It is mentioned in the Mahavamsa that the heads of the five traders were chosen as messengers to carry a welcome from Kitti Sirimegha to his son Parakrama, afterwards Parakrama Bahu the Great.

We thus catch a glimpse of the social status and importance of the “five traders,” but it is not quite clear whether these are the five just referred to, or the five sections of the artificers proper – probably the former.

In Maratha villages, the craftsmen and menial servants formed a guild or institution, regulating the customary duties and remuneration of the craftsmen and servants, and called bara balute in as much as the full number of persons composing this body was reckoned at twelve. They included the craftsmen; the inferior servants, of low caste, as barbers and scavengers; and the Bhat, or village priest. They were all headed by the carpenter, who is called the Patel of the artisans, and decided all their disputes.

The presence of the craftsmen in the midst of a simple agricultural society made possible the self-contained life of the community, so striking a feature of the Indian village.

Living in a society organized on the basis of personal relations and duties, which descended in each family from generation to generation, instead of belonging to a society founded on contract and competition, their payment was provided for in various ways, of which money payment was the least important and most unusual. The amount of money in circulation in the villages was, indeed, almost negligible, barter and personal service taking the place of money payments. Wealth was hoarded if at all, rather in the form of jewellery than of money. Prosperity consisted in having several years’ provisions of grain in one’s granary. Anything of the nature of a shop or store was unknown.

The payment of craftsmen was either a payment in kind, or a grant of land, besides perquisites on special occasions. For their customary services, the craftsmen were repaid at harvest-time, receiving a fixed proportion of sheaves of grain from the crop collected on the threshing floor, or they might be given a share of the communal land. In the last case, it followed that every man was a cultivator and directly dependent on the land for his subsistence whether he was a husbandman, a goldsmith, or a washerman by caste. To take, at random, a few examples of these payments; In the Gujrah district of the Punjab, the village servants are paid by grain fees, so many bundles of the crop of wheat or barley, each bundle of such a size as may be tied by a string of three straws in length. In the villages of another province (N.W.P.) the following persons received each a share of grain for each “plough” of cultivated land in the village; the barber, washerman, carpenter, blacksmith and cowherds besides a further allowance as an extra “when the business of the threshing-floor was over.” Thus, in Munda villages, “the Lohar, or blacksmith gets one Kat of paddy and three karais for every plough in the village, and is also paid two or three annas for every new phar or plough-share; in a very few villages he holds half a pawa of land rent free.” Almost always, too, there are set apart shares for religious and charitable purposes, before the remainder of the crop is divided between tenant and landlord, or removed by the tenant proprietor himself. In Ceylon if a man wanted a new cloth he gave cotton from his clearing, and a present of grain to the weaver. Sometimes the craftsman was paid in this kind of way whenever his services were required, sometimes he received a perquisite only on special occasions; very much as in England the postman, employed by the community, receives an annual “Christmas box” from each individual at whose house he deliver letters. At New Year, for example, it was customary, in some parts of Ceylon, to tie up a coin in each garment sent to the wash; and the washerman had other perquisites beside; and so with the other servants and craftsmen of the village.

Book review on "Indian Models of Economy, Business and Management" by P. Kanagasabapathi
The Chennakeshava Temple – the Marvel of Belur
Does Pre-Linguistic Meaning Exist?