Hinduism, he said tried to represent the superhuman and the metaphysical and, as a result, “Hindus have evolved a system of art full of metaphysical monsters and grotesques”. Carrying on the discussion, he concluded that the “Hindus are too much interested in metaphysics and ultimate reality to make good artists. Art is not the discovery of Reality – whatever reality may be… It is the organization of chaotic appearance into an orderly and human universe”. 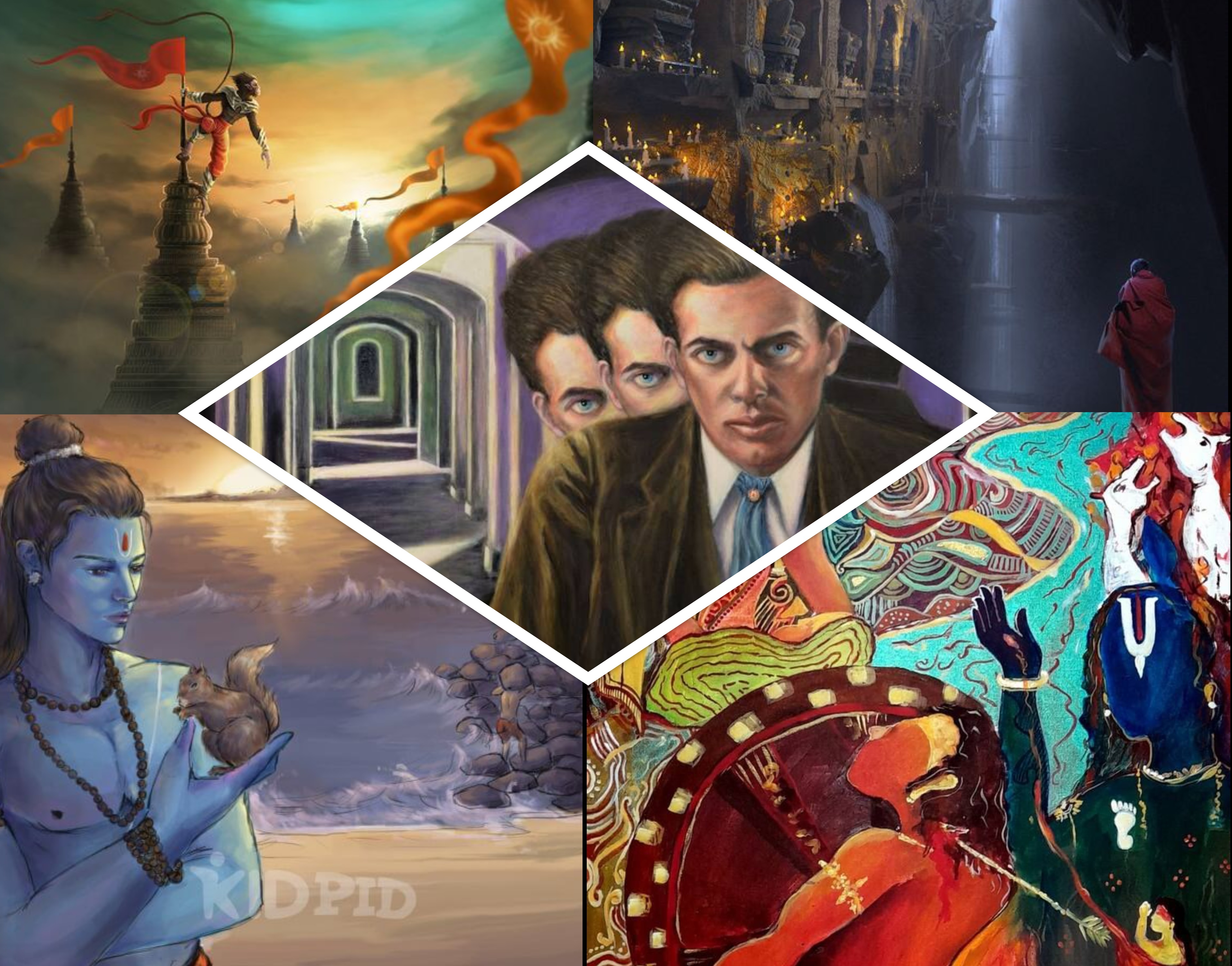 ….continued from the last part

Hindu art has been incomprehensible to most Western critics, particularly of the colonial era and they often used harsh epithets like ‘barbarous’, ‘ugly’, etc., to describe it. But it was not so with Huxley. He found much in Indian art to appreciate even while he used Western standards of judgement. He could also see though obscurely that Indian art was in some radical way different and it was trying to express another feeling, another dimension. But at this stage, he had no proper comprehension of this dimension and also no intellectual sympathy with it. Therefore, after going about in India, it confirmed him even further in his European standards. He tells us with great selfsatisfaction that a visit to India “makes one realize how fortunate, so far at any rate as the arts are concerned, our Europe has been in its religions”. He said that while in its Pagan traditions, the Olympian deities were men made gods, in its Christian tradition, the Saviour was God made man. But in neither the artist was asked to go beyond the boundaries of real and actual human life. However, it was different in Hinduism, which though it permitted the representation of the human, thought that “the human is not enough”. Hinduism, he said tried to represent the superhuman and the metaphysical and, as a result, “Hindus have evolved a system of art full of metaphysical monsters and grotesques”. Carrying on the discussion, he concluded that the “Hindus are too much interested in metaphysics and ultimate reality to make good artists. Art is not the discovery of Reality – whatever reality may be… It is the organization of chaotic appearance into an orderly and human universe”. But all this was changed when he accepted the spiritual dimension. His definition of “Reality” changed; his understanding of what is “human” changed. He developed different standards and different criterions of judgement. He developed a new eye for Hindu-Buddhist art. He also began to look at European art, music, and literature from a new angle; for example, now he began to notice the absence of a “detached character” in Shakespeare. Similarly, he began to see that the higher transcendental dimension which he had now begun so much to value was either missing or was at least very inadequately expressed in European art tradition. This point becomes clear when we read, for example, his essays on ‘Variations on a Baroque Tomb’, or ‘Variations on El Greco’ contained in his Themes And Variations published in 1950. Discussing baroque art of the seventeenth century, he speaks of its failure to find an adequate artistic expression for the mystical experience, even when its artists were rendering saints in ecstasy who were often shown gesticulating and swooning under an epileptic fit; they were often represented not with God, but with their physiology in a state hardly distinguishable from that of sexual enjoyment. He points to Berini’s statues of Blessed Ludovica Albertoni and the more celebrated St. Teresa in ecstasy and his failure to deal with the subject.19 At the end, he concludes that “no fully adequate rendering of the contemplative life was ever achieved in the plastic arts of Christendom”.

In India, Huxley saw many specimens of Muslim architecture and he thought that as a whole “Mohammedan art tends … to be dry, empty, barren, and monotonous”. Huxley also visited the Taj at Agra and he was much disappointed. He found the building expensive and picturesque but architecturally uninteresting. He thought that it was elegant but its elegance was of a “very dry and negative kind”, and its classicism came not from an “intellectual restraint imposed on an exuberant fancy”, but from “an actual deficiency of fancy, a poverty of imagination”. He compared it with contemporary European buildings in the neo-classical style of the High Renaissance, and he found it inferior in comparison. Comparing it with Hindu architecture, he said: “The Hindu architects produced buildings incomparably more rich and interesting as works of art. I have not visited Southern India, where, it is said, the finest specimen of Hindu architecture are to be found. But I have seen enough of the art in Rajputana to convince me of its enormous superiority to any work of the Mohammedans. The temples at Chitor, for example, are specimens of true classicism”. According to him, its fabulous “costliness is what most people seem to like about the Taj”, and that because it is made of marble. But “marble”, he say, “covers a multitude of sins”. Its costliness makes up for its lack of architectural merit. It could be said that art is not Islam’s forte as it repudiates it and, therefore, it has not developed it. But there is a another and even more important side of the question. The fact is that Islam also did not need much in the way of art. It had little to convey or communicate in the way of deeper spiritual truths. Its God was best satisfied with demolition of the shrines of “other Gods”, and it was in that direction that Islam found its best self-expression, both religious and artistic. In this, it was not alone. It shared this passion of demolition with other iconoclastic religions including Christianity – we forget what it did in its heyday. But the facts cannot be kept under the carpet for all time. The question is opening up again and the iconoclastic ideologies are under interrogation.

For more than a decade, Huxley had been preaching a mystical view, the presence of another world beyond the veil of the mind. But his empirical mind still sought verification of the world of which his deeper intellect was already assured. This came in 1953 when he took mescalin. It brought to him some wonderful visionary experiences. Later, he experimented with LSD and Marijuana (about ten times in all). In the experiences induced by them, a deeper dimension was added. He saw the “togetherness” of all things and their essential “alrightness”. He described his visionary experiences in his The Doors of Perception, and discussed the problem of visions in a larger theoretical framework in his Heaven And Hell. Unfortunately, these books provided intellectual support to the psychedelic drug movement that enveloped America and Europe in the sixties. Drugs could not have done much harm to Huxley, for he was already internally prepared; but the story was different with thousands of young men who came under the sway of the drug movement. Huxley had always some use for drugs in influencing the mind. In his Brave New World, citizens use Soma to suppress any suggestions of a higher reality and ideal; in his Island, Moksha-medicine is used to provide occasional glimpses into higher reality, “an hour or two, every now and then, of enlightening and liberating grace”. The rest depends on you whether you choose to “cooperate with the grace”, or continue to behave like “silly delinquents”. Habitual meditation is one of the ways in which one cooperates with those gratuitous graces. It helps in cultivating a state of mind where dazzling ecstatic insights become a permanent and assured possession. It helps man to know himself to the point that one is not “compelled by one’s unconscious to do all the ugly, absurd, self-stultifying things that one so often finds oneself doing”. That Huxley held to this view till the end becomes obvious from his posthumous work, Moksha, edited by M. Horowitz and C. Palmer, where the story is told through his letters, extracts from his previous works, his addresses to learned societies, and his articles in journals, both scientific and popular. In many cultures, some people do resort to drugs for heightened and out-of-the-way experiences, but higher Indian spirituality disfavours it. It prescribes only the method of yama, niyama, Sîla, tapas, samâdhi and prajñâ for higher aims of liberation. Godly life is holy ground; there should be no gate-crashing here, no short-circuiting. The path has it own lessons and beauties and the destination itself is in the path.

European soldiers, traders, missionaries – later on ably assisted by its colonial ideologies and scholars – opened up the East to the influences of the West. But Huxley belonged to that small group of European thinkers and seekers who opened up the West to the influence of the East – a more arduous task and in the long run perhaps more important too. He did not seek this role, it was merely a bye-product of his search for truth. Huxley was one of the finest products of Europe – of a new Europe seeking its old roots, of a Europe no longer satisfied with mere technology and science and rationality but seeking a new dimension of the spirit, a Europe self-critical and in search. He was also a profound student of Europe’s various traditions, religious, literary and artistic, and he discusses them with great knowledge, insights, authority and intimacy. In his hands, cultural Europe becomes alive. A critical discussion of Europe by such a sympathetic insider is meant to help, to fecundate; it can do no harm but will only help Europe in its spiritual rediscovery. In opening up to India and China, it would merely be opening up to an ancient tradition which was lost by her but preserved and developed in India and China.

Though Huxley came late but his name stands high on the list of those who have opened up the West to the philosophies of the East. He however spoke to a highly intellectualized audience. Perhaps it was necessary at that stage; Europe had to be approached through its intellect. But now a different channel of communication is needed. The message too has to have a more vital clothing. I believe that the Ramayana and the Mahabharata fill the bill. They represent embodied spirituality and reveal the higher dimension when it becomes dynamic in life; they give us “life-creations” of the Vedânta philosophy on which Huxley wrote so much (sixteen articles for Vedanta for the Western World and ten for Vedanta for Modern Man). We all, whether in the East or the West, need their message. Not only do they offer the highest yogas, and the highest spiritual wisdom, they also offer the great social ideals, which we need badly today. At present, our social relations – filial, parental, fraternal, conjugal, civic – are tending to become empty. They revolve round a mere utilitarian nexus and have lost the higher dimension and therefore, they bring no fulfilment. The Ramayana and the Mahabharata can help in restoring this lost dimension.

The Violence of the Romantic View of Life
Is God in Pain? (Part-4)
Hoysaleshwara Temple Halebidu – The Acme Of Temple Architecture