The place in the periphery of a kingdom where cities end and villages just merge with woodland- that part of a forest is never very dense. In such a bushy isolated area, Krishna was sitting on a branch of a tree lonely and recalling all the happenings that he had been a part of in his life- waiting for the upalakshya or predetermined event to happen that would make him die! Suddenly a poisonous arrow charged from the bow of a Vyadha or forest hunter stuck his leg. 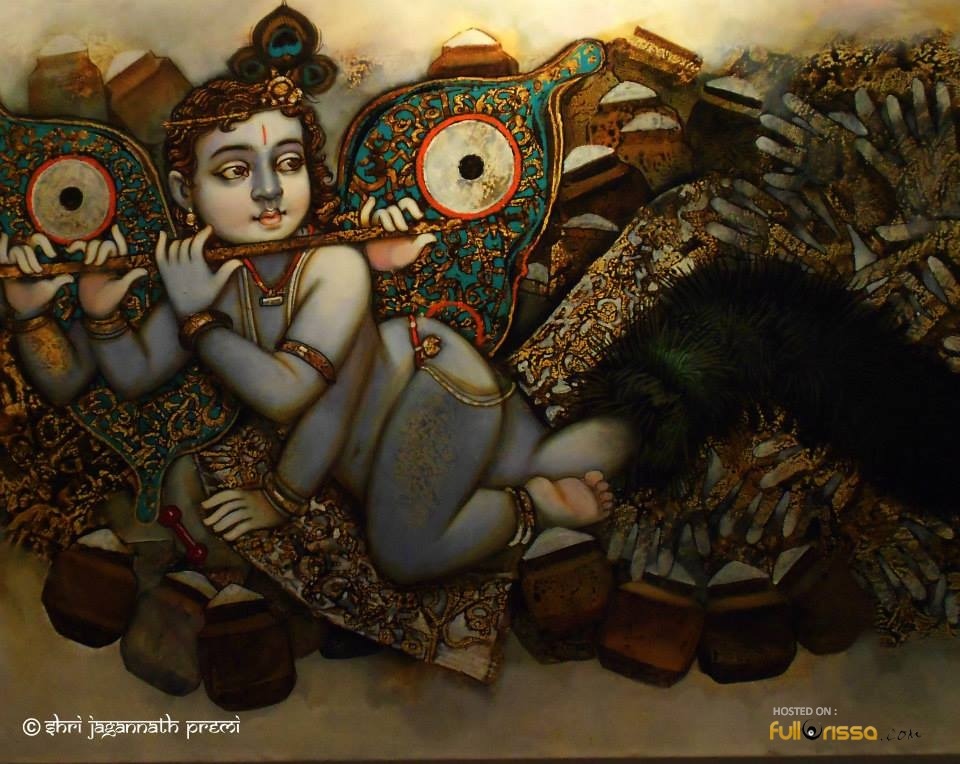 The Mousala Parva of Mahabharata has just ended. It is now time for Sri Krishna to renunciate the world wrapping up all his duties on earth. The place in the periphery of a kingdom where cities end and villages just merge with woodland- that part of a forest is never very dense. In such a bushy isolated area, Krishna was sitting on a branch of a tree lonely and recalling all the happenings that he had been a part of in his life- waiting for the upalakshya or predetermined event to happen that would make him die! Suddenly a poisonous arrow charged from the bow of a Vyadha or forest hunter stuck his leg. The man has mistakenly shot him thinking his hanging red toes to be the ear of a deer from a distance place, filled with leaves and trees in between. Identifying Krishna, he rushed to him and confessed with tears of immense guilt in his eyes, “O Lord, please forgive my ignorance. My name is Jara”. The Lord smiled and assured, “O the self-independent man of my country, I am proud of you. This whole event is preset by divine will. No sin will grasp you. You can continue with your dharma”. Till this, we get from Mahabharata of Sarala Das, Odisha’s own epic poet. Skanda Purana takes this episode further from Mahabharata. From here, it narrates that Arjuna comes and performs the death rite of Krishna. While burning the body, it is seen that his heart was left unburnt. Suddenly a prophecy came from the sky addressing Arjuna, “O hero of the heroes, bind this flesh of heart with a wood and float it in the sea. If you want, carve and draw the Chakra, Shanka, Gada, Padma- the signs of Narayana on the wood”. Yes, this is the Darubrahma that came floating to Indradyumna and on which the mysterious man was working closing the doors. It is also mentioned that Jara was reborn as Sabar Viswabasu this time, whom we have known as the most committed devotee of Nilamadhava.

Now, the scene was shocking and made the king and all others present there stunned! Yes, the Darubrahma is broken and turned into the shape of three idols. But as Indradyumna stepped forward to examine the figures properly, he saw that the Srimurtis are not properly generated. The man has left behind three idols for him with no hand and leg!

Actually, as two weeks passed, the king could not control his anxiousness. Till now everyone was able to hear the sound- ‘tik tik tik’ of the chisel and hammer. Suddenly, on the 14th day, silence came down from the place. He and his wife Queen Gundicha became more and more nervous with every passing moment of silence. They turned impatient and doubtful about whether the old sculptur’s health had taken a toll on his work or anything very bad had happened there. With his hand on the handle, the King put his ear through the door.

Though the ministers prohibited him repeatedly and even his queen adviced him to take some more time, he had desperately opened the doors. His ears clearly heard the cleaking sound of the swing spread with his hands, but his eyes could not see the man in proper place. It was quite understandable that till the portions that were visible, the idols were complete and the artist kept his word by disappearing from there. In immense guilt of being ignorant, Indradyumna again decided to give up his life regretting for his rash decision this time and went to sleep on a bed of grasses that night.

Again, Sri Jagannatha arrived in his dream and stated, “From now, as a savior of the fallen ones, I will be present here in this handicapped form. Though I am incomplete here, but I will definitely accept the complete offerings of my devotees and will spread my spiritual beauty all the time on this land of Nilachal hereafter”. The king thanked the God and prayed for the people without whom he could not have seen this day.

Satisfied with his words the Lord declared, “The sutradhar named Ananta Maharana has manifested me with his talent and from now, his descendants will create my chariots during festivals every year. Viswabasu’s progeny will serve my temple and will be called Dwaita Sevak. Vidyapati’s offspring from his earlier Brahmin wife will worship me whereas the children from his Shabar wife will prepare my food in the name of Supakar. But, now o king, please pray something for yourself”. Taking all the orders in his head and idolizing what Sri Krishna wanted for his Vrishni clan, Indradyumna requested, “Let nobody claim the properties of the temple after my death. To maintain peace here, make me remain childless”.

This is the standard narration that we get to know today regarding the legends related to the temple. Now, let us look at various descriptions and variations of the story as seen from different important scriptures.

It is evident from all these scriptures that construction and renovations were done by many rulers who have their own backgrounds as retold in the descriptions. Keeping all the legends in mind, some common features attracts our attention.

The tradition of ‘Ado Jaddaru Plabate’ as mentioned in the Vedas is thus maintained uninterrupted by later day poets and writers through the tales of Krishna’s body parts and Nilmadhava coming as Darubrahma. It becomes the merging and brotherhood of both Vedic and Non-Vedic schools along with both form and formless traditions. Historically, the current temple that we now see was built during 1042-1112 CE under the reign of Anantavarman Chora Gangadeva. After the former building was on its last legs over time, Choraganga, the Ganga dynasty emperor developed the present large skyscraper temple. Next, Sri Aangabheem, a king and yogi sustained its security, service, worshipping and maintenance spending lakhs of gold coins. Further, powerful rulers like Kapilendradev and Purushottamdev of the solar dynasty resisted the foreign attacks on Hindus and Hinduism and protected the place continuing the message of peace and friendship through the symbols of Jagannatha across India. Lastly, king Ramachandradeva of the Bhoi dynasty re-designed and re-established the idols by driving away Islamic forces in 1575. For this, he is also entitled as the second Indradyumna.

Above all, lastly, let’s not forget the contribution and efforts of Vidyapati in the whole tale. He came from an outside kingdom and culture, in search of God, maybe partly because of royal order or partly being anxious and driven by inner devotion. But, it was only he, not Indradyumna and his men, who got the view of God in pure form. He was ignorant of the path of his journey being blindfolded and so, his entire trip was incomplete like how Jagannatha had come to others and even to us today, in a partial form.

The scattering of mustard seeds presents his identity as an intelligent man but at the same time this spreading and leaving the signs of union behind on the road reminds us of some verses translated from a poetry-Aparichita (Purabi) by fervent lover and poet Rabindranath Tagore:

“From that day on, your dream in my half-asleep state in the dawn

It may be painted in the redness of pain

Where partial desire and partly forgetting were weaving the connection

But we were still not known to each other

So this time along your path

Leaving behind all the songs that I could make!”

What is the true story on The Appearance of Lord Jagannatha at Puri?

Decoding Vedic Symbolism
Leading The World In A Battle Of Convergences
The Boy Who Recalled Dying in World War II. Exploratory Studies in Reincarnation.