The mysterious person lifted the wood and carried it inside the temple. Before shutting the door the old man demanded saying, “These gates must be kept closed for the next twenty-one days. Nobody should disturb me till I am done with my divine task in this sealed chamber or I will disappear. All of you must stay away from here till I come out!”. 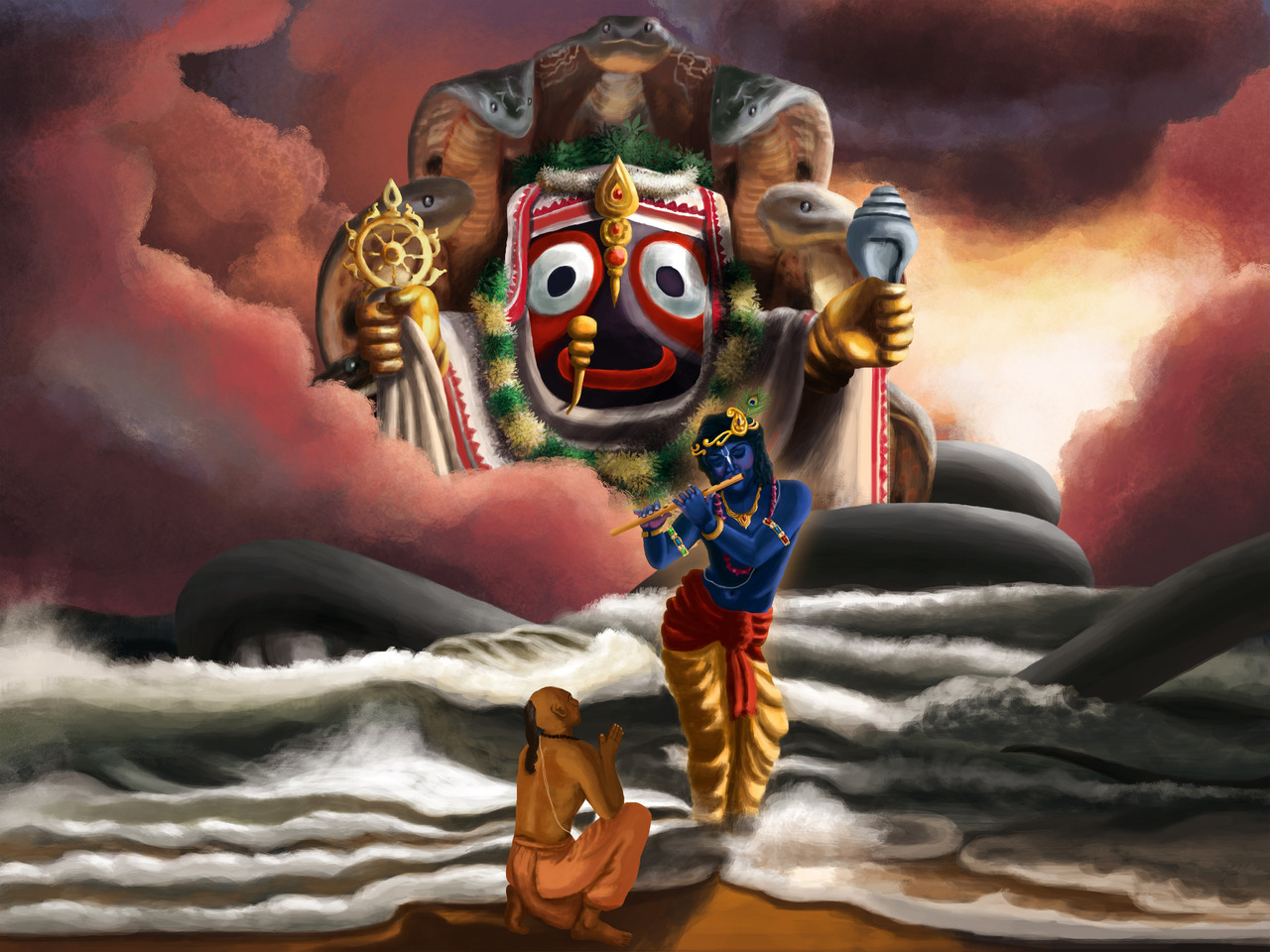 Lord Jagannatha, which means the supreme Lord of the universe has chosen Purushottam Kshetra, Puri, as his abode at one of the 4 Char Dham pilgrimage sites. Various Sanskrit scriptures have mentioned this sacred place of Lord Jagannatha. Many tribal legends are also found regarding Jagannatha, Balabhadra, Suvadra and the overall temple construction.

Details of all festivals linked to this God are found in Nilamahodaya. In a year, for overall eleven months the worship is done as per Vedic instructions, while for only one month (from Jestha or Snan Purnima till the entry of deities into the temple) the worshipping is done as per the tribal Shabar way. In the remote past, Jagannatha was known as Nilmadhava and this four-hand God was formerly found to be worshipped by the Shabar clan as per Shabar tradition.

Once, there was a Shabar chief named Viswabasu, who used to worship this deity in the valley of Nilakandar (Blue Mountains). The civilized urban Vedic people had no idea about this God. Legend has it that the ruler of Malab kingdom, Indradyumna was an ardent devotee of Vishnu and eager to meet his Lord before death. One day he came to know about Nilmadhava in the forest of Utkal as the living manifestation and another form of Lord Vishnu and hearing this he deputed and ordered many Brahmins to locate the deity in different directions.

After the failure of many, ultimately one of his smart priests, Sri Vidyapati was able to find out the location of Nilmadhava.

Crossing many barriers, he reached Savar-dwipa on the bank of the river Mahanadi, the land of Sabars, accepted their hospitality. There he met Viswabasu’s only daughter Lalita. Seeing her beauty, behavior and also the same reciprocation from the other side, he fell for her and eventually got married. Viswabasu and the other Shabars approved their relationship but never agreed to show the idol of Nilmadhava to him. Vidyapati noticed that his father-in-law used to return home daily at night smeared with odor of sandalwood, camphor and musk throughout his body after worshipping the idol. After many requests from Vidyapati and Lalita, following quite hesitation from Viswabasu’s end, finally he agreed to take him to the deity’s location in the forest but tying his eyes with clothes.

However, blindfolded Vidyapati marked his destination by spreading mustard seeds on his path, which worked out and helped him later to find his way by following the row of mustard trees formed. In the Uttar Khanda of Skanda Purana, it is written that the narrow path to the cave where Nilmadhava resided is at the north of Rohini Kunda near Kalpabatta tree on the Nilakandar. As his patch was removed and made him witness the God’s face for the first time, he got absorbed by the divine love and started dancing with ecstasy.

In the meantime, Viswabasu left him in front of the living figure and went to collect fruits and forest flowers outside. At once, Vidyapati saw a sleeping crow falling into a pool from a tree in front of the idol and raised up taking the form of a four-handed Narayan that seemed to disappear in the Vaikuntha Loka. Tempted by this scene, he himself tried to sacrifice his body like the liberated crow and meanwhile heard a divine voice saying, “O Brahman, you have still not accomplished your task to inform king Indradyumna about my address”. This made him refrain from his self-abnegation. As Vidyapati returned, God accepted the food and flower offerings of his devotee in his own hand. This made Vidyapati spellbound. As the puja ended, God revealed to Viswabasu, “O my most beloved devotee, till now I am happy to see your bhakti and satisfied with all the offerings you and your clan have provided me. Recently, king Indradyumna also ardently wants me. So, I have decided to take his obeisance also”.

“But, how can I be deprived of my worship and penance?”, thinking this and breaking down, he kept his son-in-law in his containment. However, Vidyapati managed to get away with her wife’s help and immediately set out for Abanti, the capital of Malaba. Hearing everything, Maharaja Indradyumna’s joy knew no bounds and overwhelmed with anxiousness departed with his soldiers and courtiers to visit the Lord banking on and guided by Vidyapati. However, as he reached the village of Sabars, he found a heap of sand in the place, as the idol of Nilmadhava disappeared! In anger and extreme shock, he besieged the area thinking that this could be a conspiracy of Viswabasu and decided to commit suicide.

Actually, Nilmadhava passed from everyone’s sight due to the commitment of Lord Vishnu to Lord Yama, the God of death. Yama feared that people would get free from all their sins, achieve salvation and move to Vaikuntha Loka directly after facing Nilmadhava. They will be no longer wait in the snares of Samsara, the cycle of birth and rebirth and come to Yama’s abode or the house of death anymore. At once, a voice came out from the sky for Indradymnua revealing, “O the greatest of my devotees, why are you worrying? You will not see my current form. Construct my idol out of Darubrahma or the divine wood of neem tree form, in which I am floating in the sea right now, knowing your invasion. Then, go and establish me at Nilagiri. You can worship me there”.  Hearing that and cooling down the king set for searching that particular wood surrendering to Lord Vishnu. Within a few days, the king saw a similar wood coming floating towards the sea shore in his dream.

Really, in the next morning, he visited the beach and found that huge, fragrant, reddish material in the place which is at present known as Bankimuhan. Moreover, the king, his companions and the commoners present there were also overwhelmed seeing the signs of Lord Vishnu’s possessions on the unknown piece. However, nobody could lift the strange material of wood from there although making many severe hard attempts. That night, again Lord Jagannath himself appeared in his dream and asked, “First bring my former devotee Viswavasu in a golden chariot in front of the Darubrahma”. The next morning, the king obeyed the divine order and this time, Viswavasu and Vidyapati brought up the log together and with serious care placed it on the Maha Vedi.

It is said that at that time Brahma started a yajna at Nilgiri, where the present Sri Mandir exists, placing Lord Nrisingha, another form of Vishnu over the alter. The idol of Nrisinghadev is still there on the western side of the Mukti Mandap. Many skilled artists were called for carving the Srimurti from the divine wood, but everybody failed to put any minimum scratch on it, ending up breaking and shattering the tools and pieces of machinery brought for the construction. In a while, the God himself, disguised in a form of some frail-looking old artist appeared and introduced himself as Sri Ananta Maharana. He claimed to complete the whole task in 21 days that have been proved to be impossible to start for others till now.

The sculptor also asked, “Please make and bring three chariots for the idols by anybody, from anywhere you can”. The king got pleased and immediately hired him. The mysterious person lifted the wood and carried it inside the temple. Before shutting the door the old man demanded saying, “These gates must be kept closed for the next twenty-one days. Nobody should disturb me till I am done with my divine task in this sealed chamber or I will disappear. All of you must stay away from here till I come out!”.