Rabindranath Tagore’s Vision of The Upanishads

Though his creations are mainly poetic instead of philosophical treatises, he kept on growing up with a wide-ranging, constant and inventive worldview- full of references to the Upanishads pervading all of his thoughts, actions and engagement. In his entire life and comprehensive creations, that came up with universal human impulses, we see the inspiration from the sloka: “Satyam Jnaanam Anantam Brahma . 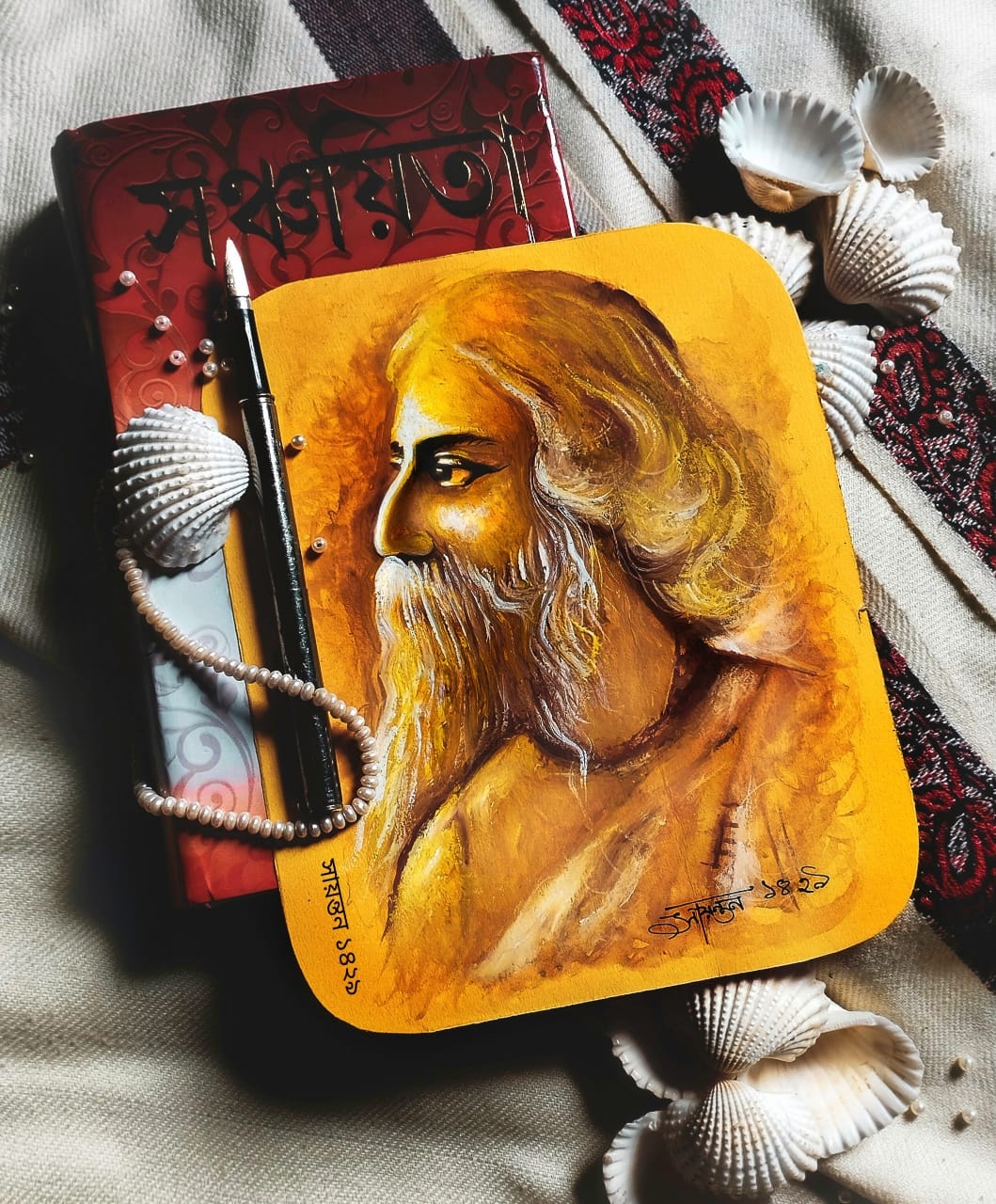 Who are that “You” in this entire gigantic universe and tell me what is your identity here? Is there any answer? But surely “I am here“- on your opposite side- this is the only true response that I can assure from this vast universe. Previously, there were many others moving around me in the nature and communicating with me, but, alas! no-now they are also not here. Likewise, one day will definitely come when my “I” will also not be here. Yes, I can not deny this truth also. In such a situation, thinking and interrogating all these facts starting from inner “I-ness”, how a person is gradually becoming free of burden in opening all these knots in life, can be clearly witnessed by reviewing Tagore’s poetic career in depth. Rabindranath Tagore was a true mystic whose heart always craved the union with the divine. The poet used to consider the texts of Upanishads to be his companions till death. Though his creations are mainly poetic instead of philosophical treatises, he kept on growing up with a wide-ranging, constant and inventive worldview- full of references to the Upanishads pervading all of his thoughts, actions and engagement. In his entire life and comprehensive creations, that came up with universal human impulses, we see the inspiration from the sloka: “Satyam Jnaanam Anantam Brahma (Taittiriya Upanishad 2.1.1)”. The more he struggled for the divine truth, the more he went on establishing himself in the human truth. He repeatedly declared that the manifestation of divine lies in evolution of men.

His writings relate sentiments and emotions which are true to all ages and climates. During the initial stages of his spiritual journey, he was influenced by a couple of factors. Firstly, the environment he got from his family and secondly, his own flow of thoughts.  His father Debendranath Tagore was one of the foremost personalities of the newly awakened Bengali society. In his childhood, when he was twelve, his father, whose family’s outlook on life was influenced by the Upanishads and the Gita, used to take him to the mountains for travel. Taking bath in the cold water in the early morning there and reciting slokas from Vedas- introduced Rabindranath to the world of nature! Those teachings remained with him till his last minute as days passed through many ups and downs and more pain and separation. Later in his life, he admitted that though he already memorized the slokas, he could not accept all of it. This is because though he had respect but he did not gain that power. To date, as the readers come across wondering why we search or at least why we feel the need to connect with the poet in every happiness, sorrow, separation, reliance of our life, the answer must lie in the fact how Upanishads build up his mindset, where he himself used to seek refuge for overcoming his turmoiled situations more and more. Thus, as a voice of India’s spiritual heritage, his creations provide us with precious signs to assimilate with the teachings of the Upanishads.  Readers can clearly point out various stages through which his poetical mind and emotions have passed, in terms of maturity due to his dynamic quality of writings. Mainly, his realizations have undergone three phases- firstly, feeling presence of the divine in everything, secondly, realizing the personal God within and thirdly, aimed at finding oneness with the universal divine God. However, countless sorrow and imperfections that let forlorn Rabindranath down is found to have surpassed his happy and fulfilled side of personality many times. However, he never desponded his beloved God, freely expressing that “Let the truth of this birth be known to the clear eye before the time is gone.”

Besides Gitanjali, the crisis of “self” is seen throughout all his creations. A reader may ask, who is the one sitting on the throne of self? Is He the one searching for “You”? If this is so, who is that “You”? Is he the god of life force, whom the poet himself called in various names like prabhu, raja, paransakha, friend, antaryami, nath, swami? Composing poetry after poetry, the poet has looked forward to face God and create a personal spiritual bond with Him. His poems from Gitanjali express his longing, hope and even conviction of this. We see that sometimes the “self” figures out the path to reach the Absolute or Greater Self, sometimes that struggles to come out of and go beyond the limit of the small “self” and then merge with the Absolute. It is like love and devotion have turned one and the same. Somewhere we find constant understanding with Him, whereas sometimes there is endless waiting or unconditional self-sacrifice. Moreover, his yearning is so acute that he becomes unable to feel rest or peace in absence of God. The mind floating around turns bleak and down as it detaches from the mediation of the divine. In one of his poetries, he applies a very stunning picture of “a shoreless sea of toil” in his mind for expressing the tremendous actions to be performed in this world.

For him, there is nothing more veracious than love and cannot be, since it symbolizes inseparable unity, harmony and oneness. He looks for the divine through his music, overlooking all his physical limitations. In this context, Gurudev referred to love as integrated essence where it is the unique state of becoming one with God. Though an abstract idea, the poet ended up claiming that love has to be personal where starting from the near ones it extends and mixes up with the entire universe- from the nearest possible contact through man to every creature, nature and ultimately the God. This not only resonates Upanishadic realization but also conveys the Vaishnavite flavour of love towards God. The entire universe is filled with happiness and Tagore interprets the same terms for joy and love interchangeably in his writings. Not in between men and women, the poet got the picture of God in nature and creatures. “Sarvam Khalvidam Brahma”– is a matter of feeling for him, not any knowledge or theory. He fell for the Leela of God- infinite within finite, always playing in his life.

Before death he wished his body to be buried in Shantiniketan’s soil as in his lifetime he craved to stay under the open sky of the lavish field of Shantiniketan (abode of peace) than the noisy and cheerful sound of Calcutta. Moreover, he has passed on to us the absolute secret of the vast worldly divine life behind the obscurity of regular lifespan.  As people are caged under the ignorance of ego and forget the nature of the soul, Rabindranath reminds us about self-Dharma with unconditional self-sacrifice and unparallel trust- turning down the deep pride inside!

According to him, the divine with life and the divine within the universe are the same. One has come to light as the natural law, while the other is our longing for love. As one is the reality, the other complements it as the eternal joy. For him, salvation never lies in running away but to accept the entire universe within one’s soul. Holding on to the small and insignificant is a common mistake of everyone and in the process of fostering these things, the “Greater Self”, like the other side of the Moon, remains undisclosed and not known in the daily Maya. Further, they ignore the calls of the great pure-hearted enlightened people as if seeing one side of the moon makes him happier and further, grasp the current life with absolute compassion. Nonetheless, the poet has wished to move beyond all these where performing duties for others does not feel to be a burden and instead, it cheers up the inner mind.

As all his experiments and realizations transcend normal vision, the space within his mind fills up with an intense light which is the symbol of both life and death simultaneously. As he came to a certain point in his life, he could not say “no” to death. He greets death as the gateway to reunite with the creator, instead of getting afraid of it. In his writings, death is expressed as a bride, boatman, businessman, traveller and so on. Once who asked how to reconcile between “what remains” and “what leaves me”, later reveals through his verses that there is a similarity between these two, otherwise this infinite vast trickery could not continue under the wit of natural laws. Yes, it’s a hoax and Rabindranath deciphered the verses from Shantiparva of Mahabharata that he himself tried to conjure up every time- “sukhaṃ vā yadi vā duḥkhaṃ dveṣyaṃ vā yadi vā priyam | prāptaṃ prāptamupāsīta hṛdayenāparājitaḥ”. This line seemed to work for him as in his own words, whenever he found pleasure, he was not surprised by the appearance of misery next time.

The poet being a realist and spiritual humanist accepted the first entity with his entire heart that reflected on his speech, action, life and firm duty, as his fascination, compassion, care, spirit, prominence and love. He understood that the supreme divine principle is too vast to grasp and hence we must love and serve it in the form in which it has closely manifested to us. Here lies humanity. Thus, through analysing his struggle for life as an example, we can hope that we have the opportunity to live a higher life. Kaviguru developed finer emotional faculties that lie in self-effacing and unconditional commitment toward love seeking fulfilment in selfless actions.  Here lies the broader and in-depth relationship with the divine and the universe- the basis of our true religion!

Why shall we remember the ascetic poet today on Rabindra Jayanti? The ethereal sky and the eternal stillness, the nature, flowers, fountains, rains, dance and song of birds, the call of mountains and the sea- enchanting the mind with infinite song of eternity successfully touched his human heart. He also related himself to the silent cry of the poor and realized the heaven and earth to be one, welcomed the human species with the ultimate respect. Coming at the final stages of his life he declared the promising words, “It is a sin to lose faith in man, I will try my best to save that trust till the end.  One day will come when the undefeated people will overcome all barriers in their quest for victory and move forward on the path of regaining their great dignity”.