Pañcānga is popular even today among the Hindus. Hindu priests use it for predicting eclipses, defining time of various rituals, including marriage, casting horoscopes, and for solemn entrance into a house (grah-praveśa) or business.Hindu families commonly use Pañcānga to check the day of fasting, auspicious times for worshiping, and days of festivals. 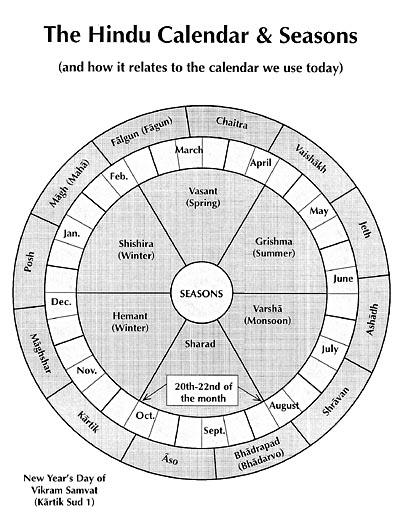 Pañcān˙ga (Pañcā = five and anga = limb, meaning five-limbed) is the term used for the Hindu almanac. The five limbs are: day (vāra), date (tithi), naks.atra (asterism), yuga (period), and kāranā (half of tithi). Pañcānga is popular even today among the Hindus. Hindu priests use it for predicting eclipses, defining time of various rituals, including marriage, casting horoscopes, and for solemn entrance into a house (grah-praveśa) or business.Hindu families commonly use Pañcānga to check the day of fasting, auspicious times for worshiping, and days of festivals.

In the Hindu Calendar, a month is divided into two equal parts, known as paksa, each of roughly fifteen days depicting the waxing and waning of the Moon. The paksa starting from the new moon to the full moon is considered the bright-half (Śukla-paksa) while the second part starting from a full moon to a new moon, is known as the dark-half (Krsna-paksa). [1] The new moon day, when the longitude of the Sun and Moon are equal, is called amāvāsya. The full moon night, when the Sun and the Moon are 180 out of phase, is known as pūrnimā. It gives a mean lunar year to be 354 days 8 hours 48 minutes and 34 seconds.

A day (vāra) begins at sunrise. The date (tithi) is indicative of the position of the Moon relative to the Sun. A month (māsa) starts and ends on amāvāsya (meaning dwelling together, implying conjunction of the Sun and the Moon, the new moon). The word amāvāsya is used in Atharvaveda [2] which signifies that the ancient Hindus knew the cause of the new moon during the Vedic period. The days in between amāvāsya and pūrnimā are counted as numbers: ekādaśī (eleventh day of the fortnight), caturthī (fourth day of the lunar fortnight), etc. The ecliptic circle was divided into 27 parts, each consisting of 13 degrees and 20 minutes, called naksatra.

The Western calendar is irregular and inconvenient to use because:

1. There exists no easy way to figure out the date of a particular day from simple observations.

2. Different months have different numbers of days. This creates difficulties in the business world where, at times, monetary transactions are made based on the day devoted to a particular task.

3. Because the span of a month is different for different months, performance records are difficult to compare.

Most people use the Western calendar since their childhood and are not familiar with alternatives, they do not realize its weaknesses. In the lunar calendar, one year equals 354 days and, in the solar calendar, one year is roughly equal to 365 days. The difference of 11 days in a year can cause radically different seasons for the same month in two years in a lunar calendar that are about 15–17 years apart from each other. This is the case with the Islamic calendar.

This defines the sidereal day as the period from one star-rise to the next, civil days as one sun-rise to the next, and the lunar month, or synodic month, as from one new moon to the next new moon. The ancient Hindus, who knew both the lunar and solar calendars, realized that 62 solar months are equal to 64 lunar months. Therefore, they added one extra month after every 30–35 months.

The Rgveda described the Moon as “the maker of months” (māsa-krt). [4] “True to his holy law, he knows the twelve Moons with their progeny: He knows the Moon of later birth,” [5] Here “the twelve Moons with their progeny” means the twelve months and “the Moon of the later birth” means the 13th month, the supplementary or the intercalary month of the luni-solar calendar. This is a clear indication of the luni-solar calendar during the Rgvedic-period. The Atharvaveda also mentions the 13th month in some years. “He [Sun] who meets out the thirteenth month, constructed with days and nights, containing thirty members, . .”[6]

Al-Bīrūnī explained the Hindu luni-solar calendar in his book, Alberuni’s India: “The months of the Hindus are lunar, their years solar; therefore their new year’s day must in each solar year fall by so much earlier as the lunar year is shorter than the solar (roughly speaking, by eleven days). If his precession makes up one complete month, they act in the same way as the Jews, who make the year a leap year of thirteen months . . . The Hindus call the year in which a month is repeated in the common language malamasa [malamāsa]. Mala means the dirt that clings to the hand. As such dirt is thrown away out of the calculation, and the number of months of a year remains twelve. However, in the literature, the leap month is called adhimāsa.”[7] Kautilya (ca. 300 BCE), in his Arthaśāstra, mentions a separate intercalary month and calls it malamāsa. [8] This month is generally added every third year. [9]

In the Hindu calendar, most of the festivals have religious, social, and seasonal importance. In societies where the lunar calendar is in practice, the seasonal festivals are not much celebrated. India is an agricultural country where approximately 65% of the population still lives in villages. During the Holī festival, a big fire is burned every year to symbolize the death of Holikā, the aunt of Lord Dhruva. People bring a sample of their harvest, and place it over a fire to roast the wheat or barley seeds which they tie to sugarcane. They share these seeds and sugarcane with friends and family members and decide whether the crop of wheat, barley and cane sugar is ready for harvest or not. During Daśaharā, the quality of barley and wheat seeds is tested in a social gathering; people carry sprouted seeds and share them with their friends. Similarly, after the monsoon season from July to September, one needs to get ready for the winter in India.

The following are the months in the Hindu calendar:

Nothing was more natural for the sake of counting days, months, or seasons than to observe the twenty-seven places which the Moon occupied in her passage from any point in the sky back to the same point. The location of the Moon and its shape provided the tithī (date) as well as the particular time in the night sky for astute observers. This procedure was considerably easier than determining the Sun’s position either from day to day or from month to month. As the stars are not visible during daytime and barely visible at sunrise and sunset, the motion of the Sun in conjunction with certain stars was not an easily observable task. On the contrary, any Vedic shepherd was able to decide day and time easily with the observation of the Moon.

Ik Onkar: Sikhism and the Message of Oneness
The Battleground of Demons
The Advaita Vedanta Critique of Buddhism: Absolute Idealism vs. Subjective Idealism 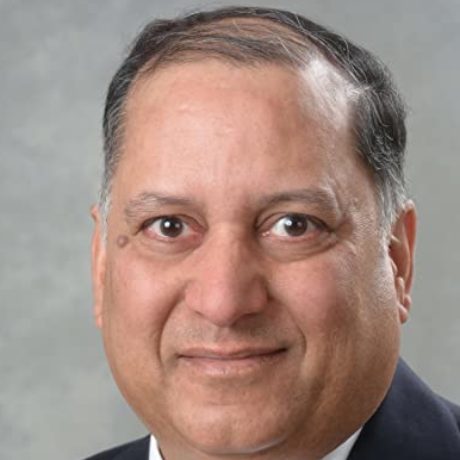 Alok Kumar is a distinguished teaching professor of physics at the state university of new York at Oswego. He was born and educated in India. He has been teaching in the American higher education for about four decades. He is a fellow of the alexander von Humboldt foundation, Germany and a nova/nasa fellow.