It is my conviction that our children get nothing more in the high schools than a half-baked knowledge of English, besides a superficial knowledge of mathematics and history and geography some of which they had learnt in their own language in the primary classes. 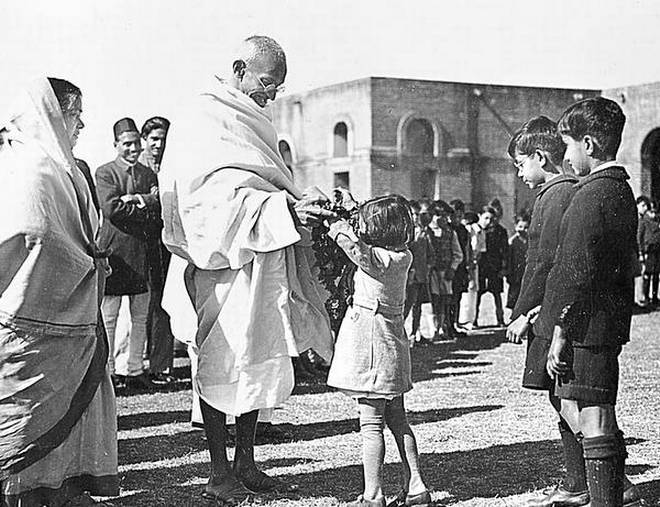 “By education I mean an all-round drawing out of the best in child and man – body, mind and spirit. Literacy is not the end of education nor even the beginning. It is the only one of the means whereby man and woman can be educated. Literacy in itself is no education. I would therefore begin the child’s education by teaching it a useful handicraft and. enabling it to produce from the moment it begins its training. […] I hold that the highest development of the mind and the soul Is possible under such a system of education. Only every handicraft has to be taught not merely mechanically as is done to-day but scientifically, i.e., the child should know the why and the wherefore of every process. […] I have myself taught sandal-making. and even spinning on these lines with good results. This method does not exclude a knowledge of history and geography. But I find that this is best taught by transmitting such general information by word of mouth. One. imparts ten times as much in this manner as by reading and writing. The signs of the alphabet may be taught later when the pupil has learnt to distinguish wheat from chaff and when he has somewhat developed his or her tastes. This a. revolutionary proposal but it saves immense, labour and enables a student to acquire in one· year what he may take much longer to learn. This means all-round economy. Of course the pupil learns mathematics whilst he is learning his handicrafts. […] There would be degrees for mechanical and other engineers. They would be attached to the different industries which should pay for the training of the graduates they need. Thus the Tatas would be expected to run a college for training engineers under the supervision of the State, the mill associations would run among them a college for training graduates whom they need.”

“It is by making the children return to the State a part of what they receive from it that I propose to make education self-supporting. I should combine into one what you call now the primary education and [the] secondary or high-school education. It is my conviction that our children get nothing more in the high schools than a half-baked knowledge of English, besides a superficial knowledge of mathematics and history and geography some of which they had learnt in their own language in the primary classes. If you cut out English from the curriculum altogether, without cutting out the subjects you teach, you can make the children go through the whole course in seven years, instead of eleven, besides giving them manual work whereby they can make a fair return to the State. Manual work will have to be the very centre of the whole thing. I am told that Messrs Abbot1 and Wood recognize the value of manual work as an important part of rural education. I am glad to be supported by reputed educationists. But I do not suppose they place on manual work the kind of emphasis I place. For I say that the development of the mind should come through manual training. The manual training will not consist in producing articles for a school museum, or toys which have no value. It should produce marketable articles. The children will not do this as children used to do under the whip in the early days of the factories. They will do it because it entertains them and stimulates their intellect […] I say that the principal means of stimulating the intellect should be manual training. I have come to this conclusion because the intellect of our boys is being wasted. Our boys do not know what to do on leaving schools. True education is that which draws out and stimulates the spiritual, intellectual and physical faculties of the children. This education ought to be for them a kind of insurance against unemployment.”

“The idea is that we should have one teacher for twenty-five boys, and you may have as many classes or schools of twenty-five boys as you have teachers available, and have each of these schools specializing in a separate craft-carpentry, smithy, tanning or shoemaking. Only you must bear in mind the fact that you develop the child’s mind through each of these crafts. And I would emphasize one more thing. You must forget the cities and concentrate on the villages. They are an ocean. The cities are a mere drop in the ocean. That is why you cannot think of subjects like brickmaking. If they must be civil and mechanical engineers, they rill after the seven years’ course go to the special colleges meant for these higher and specialized courses. And let me emphasize one more fact. We are apt to think lightly of the village crafts because we have divorced educational from manual training. Manual work has been regarded as something inferior, and owing to the wretched distortion of the varna we came to regard spinners and weavers and carpenters and shoe-makers as belonging to the inferior castes, the proletariat. We have had no Cromptons and Hargreaves because of this vicious system of considering the crafts as something inferior, divorced from the skilled. If they had been regarded as callings having an independent status of their own to the status that learning enjoyed, we should have had great inventors from among our craftsmen. Of course the ‘Spinning Jenny’ led on to the discovery of water-power and other things which made the mill displace the labour of thousands of people. That was. in my view, a monstrosity. We will by concentrating on the villages see that the inventive skill that an intensive learning of the craft will stimulate will subserve the needs of the villagers as a whole.”

The Traditional and the Secular Festival
History of Jagannatha Temple I: From Vidyapati's quest of Nilmadhava to arrival of Darubrahma
The Romantic Idea of Education