An interesting feature of the temple is that the lamp inside the temple has been burning for the past 200 years! It consumes almost a litre of oil daily. 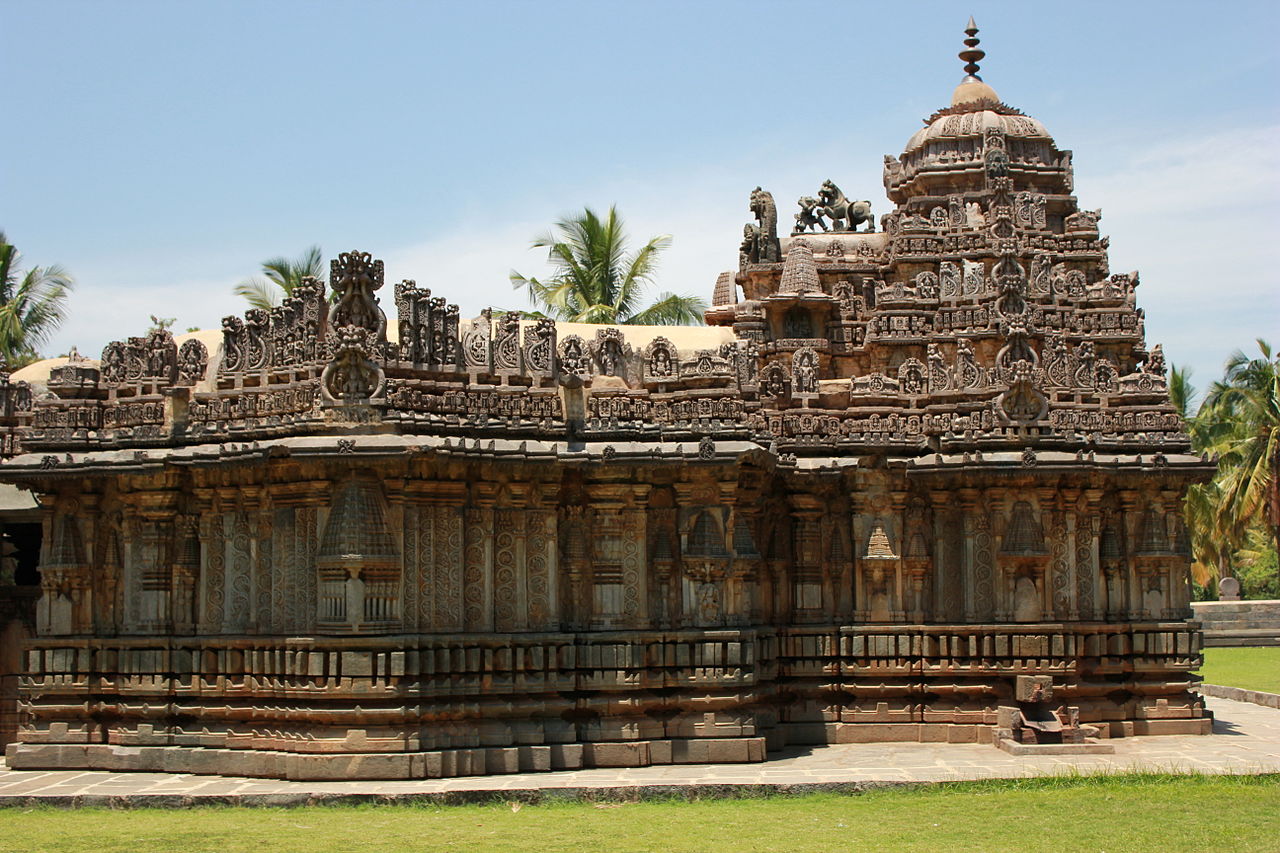 The exquisite Amrutheshwara Temple (also known as Amrutesvara) is located in the village of Amruthapura in Chikmagalur district of Karnataka. Externally, the temple gives a deceptively small look, but visitors are surprised with the number of wonders it holds within. The temple was built in 1196 CE by Amrutheshwara Dandanayaka (commander) under the Hoysala King Veera Ballala II. He also set up a Brahminpuri of 24 Brahmin families around the temple for looking after the affairs of the temple.

The Amrutheshwara Temple is an ekakuta temple (having one shrine) built close to the Bhadra River reservoir. The temple has an boundary wall adorned with unique equally-spaced circular carvings, which have survived in their original state.

The temple is medium-sized and similar to the Veera Narayana Temple at Belavadi. The open mantapa has twenty-nine bays, and the closed mantapa has nine bays with a side porch that leads to a separate shrine on the south side.

The rows of polished lathe-turned black pillars that support the ceiling of the mantapa is a Hoysala-Chalukya decorative idiom and an outstanding feature of the temple. The mantapa has many deep-domed inner ceiling bays, which are adorned with detailed floral/geometric designs.

The outer parapet wall of the open mantapa has a total of 140 panel sculptures with depictions from the Hindu epics. The Ramayana scenes are sculpted on the south side wall on 70 panels, with the story proceeding, quite unusually, in an anti-clockwise direction. On the north side wall, all depictions are clockwise, a norm in Hoysala architectural articulation. Here 25 panels depict the life of Krishna and the remaining 45 panels depict scenes from the Mahabharata.

The shrine is square in shape and has its original shikhara (tower), which is a seven story structure consisting of seven rows of indented square-shaped kirtimukhas (demon faces) with miniature decorative towers (aediculae). In each of these kirtimukhas are placed a form of Rudra. The original stone kalasa (water pot) at the top is missing and it has been replaced with a metal kalasa.

The sukanasi, the lower tower on top of the vestibule that connects the sanctum to the closed mantapa (the sukanasi appears like the nose of the superstructure), has the original Hoysala emblem of “Sala” fighting the lion. Kannada folklore tells a tale of a young man, Sala, who saved his Jain guru, Sudatta, by striking dead a lion or tiger he encountered near the temple of the goddess Vasantika at Angadi, now called Sosevuru. The word “strike” literally translates to “hoy” in Old Kannada, hence the name “Hoy-sala“. This legend first appeared in the Belur inscription of Vishnuvardhana (1117 CE). The legend may have come into existence or gained popularity after King Vishnuvardhana’s victory over the Cholas at Talakadu as the Hoysala emblem depicts the fight between the mythical warrior Sala and a tiger, the tiger being the emblem of the Cholas.

This is a Shaivite temple with a Shiva linga that had been brought from River Gandaki in Nepal. A beautiful murti of Sharada Devi is installed on its right. There is a Nandi placed at the end of the matapa (hall) facing Shiva. Nandi (bull) is Shiva’s vahana (vehicle), doorman, companion and the head of all the Ganas (attendants). In Hindu scriptures, Nandi is the bearer of truth and righteousness. Each Hindu god has their own vahana (the Sanskrit root word for the English term of Wagon) that they use. These vahanas stand for specific qualities that are consistent with the deity’s image and functions. Nandi signifies strength, load bearing capacity and virility.

An interesting feature of the temple is that the lamp inside the temple has been burning for the past 200 years! It consumes almost a litre of oil daily.

In a typical “older style” that was common in most 12th century Hoysala temples, there is one set of eaves where the tower meets the wall of the shrine. The eave is a projecting roof overhanging the temple wall and it runs around the temple. Below the eaves are decorated miniature towers (aediculae) on pilasters. In later Hoysala architecture, this space was used to sculpt panels from the epics. Below these are five mouldings running around the shrine.

A distinctive feature of the temple is the balustrade of the outer mantapa, which has over 100 miniatures of temple tower-like structures as part of the decorative swirls in bas-relief. These decorations have been done with minute craftsmanship.

The temple also houses a large stone inscription, which consists of Kannada poetry composed by 13th century Kannada poet Janna who had the honorific Kavichakravarti (emperor among poets), reflecting the rich knowledge of the poets of this era. Yashodhara Charite, Ananthnatha Purana and Anubhava Mukura are among his famous works.

Ruvari Mallitamma, the well-known Hoysala-era sculptor and architect is known to have started his career in this temple working on the domed ceilings in the main mantapa.

Amruthapura is a small village located 67 km north of Chikmagalur. It is 110 km from Hassan and 35 km from Shimoga on NH 206. Another of the Hoysala jewels in this area, the sculptures of the temple are beyond description, especially the unique polished lathe-turned pillars. One has to visit the temple to grasp the craftsmanship of the work. One intriguing fact is that till date no one actually knows the technology which was used to make the perfectly circular pillars since machines supposedly did not exist in that era! One can only visualise the advanced technology of that period, a chapter that remains missing from our collective consciousness and history books.

Some of the important rituals performed here are the Bilva Archana and the Kumkuma Archana. Aksharbhyasam (or Akshara arambham) is also performed here, which is a traditional religious ceremony in which children are initiated to formal education by making him/her write the beejaakshar “Om”. Devotees whose children are poor in studies also visit the temple to seek blessings. A tradition followed in the temple is of gifting a sari to show one’s thanksgiving.

To view more photographs of the temple mentioned in this article, see my photo blog at https://collectingmoments.in/amrutheshwara-temple-amruthapura/

The Building of Jaipur: Work in Astronomy
The wonder of Abhinav Gupta (Part 1)
Creepers of Compassion - A Book Review