In the Footsteps of Hind Swaraj. The Oeuvre of the Historian and Political Thinker Dharampal – 2

In an attempt to comprehend the immediate causes for the disoriented functioning of Indian state and society, Dharampal began examining the proceedings of the Indian Constituent Assembly (1946-1949). This investigation was published as a cogent monograph in 1962. 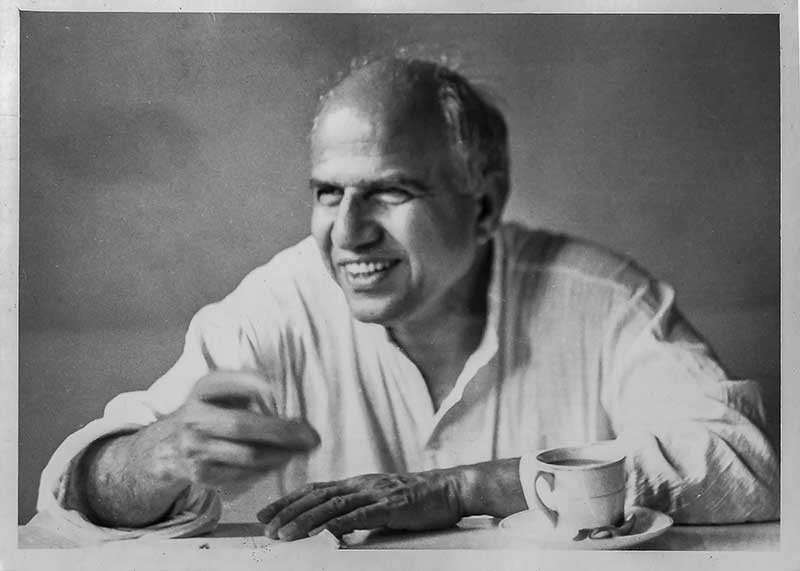 Notwithstanding his decision to leave Bapugram early in 1954, Dharampal continued to be preoccupied with India’s rural regeneration. After a three year interlude in London where he had joined his wife and two small children,[1]he returned to India in late 1957[2] to work towards the realisation of this essential task. From 1958 until 1964, based in Delhi with his family, he pursued endeavours in this field more intensely: His overriding aim was to impact upon policy-making in order to attenuate the dichotomy between “Bharat” and “India”. This he hoped to achieve in his capacity as General Secretary of the Association of Voluntary Agencies for Rural Development (AVARD).[3] Founded in 1958 by Kamaladevi Chattopadhyay, AVARD, as the first Non- Government Organisation (NGO) in independent India, played a path-breaking role, presided over by Jayaprakash Narayan (known as JP), with whom Dharampal developed a very close relationship of mutual respect and appreciation. His appointment at AVARD provided him the opportunity to get first-hand insights into pan-Indian rural conditions as well as into the (mal-) functioning of institutional frameworks. Dharampal’s critical reflections about misconceived governmental planning and development projects were articulated with stringent precision in leading articles to the AVARD Newsletter (later renamed “Voluntary Action”) where, to cite one example, when writing in the context of the Lok Sabha debates on the draft of the Third Plan, he castigated the status-quo view as follows:

“[…] the people for whom we plan and weave our dreams are seldom anywhere in the picture. More often they are just labourers, wage-earners, with little sense of participation or adventure in the India we plan to reconstruct. The reasons for such apathy are perhaps very deep, somewhere very near the soul of India. Yet that soul has to awaken, before we proceed from dams and steel plants to the flowering of the human being, of the Indian we have deemed to be ignorant, of the people of India whom we describe as ‘teeming millions’ equating them with ant-heaps. Such awakening, however, is not impossible – Gandhiji did it against heavier odds. All of us in a way are heir to Gandhiji, what we lack is proportion and humility.”[4]

In an attempt to comprehend the immediate causes for the disoriented functioning of Indian state and society, he began examining the proceedings of the Indian Constituent Assembly (1946-1949). This investigation was published as a cogent monograph in 1962. That it was entitled Panchayat Raj as the Basis of Indian Polity[5] rendered explicit his prime concern: In reproducing extracts of the Constituent Assembly debates the failure of the Constitution to incorporate the indigenous administrative and political structures is highlighted. And the poignancy of the matter is underscored by prefacing his introduction with the following quote by Gandhiji:

“I must confess that I have not been able to follow the proceedings of the Constituent Assembly […] [The correspondent] says that there is no mention or direction about village panchayats and decentralization in the foreshadowed Constitution. It is certainly an omission calling for immediate attention if our independence is to reflect the peoples’ voice. The greater the power of the panchayats, the better for the people.”[6]

Yet Dharampal’s political intervention in public affairs was soon to take on a more assertive form: In November 1962, incensed by the debacle of the Indo-Chinese war, he wrote an open letter[7] to the members of the Lok Sabha calling for Jawaharlal Nehru’s resignation on moral grounds. For this castigatory act, Dharampal (along with two friends, Narendra Datta and Roop Narayan, who were co-signatories of the letter) was arrested and imprisoned in Tihar jail, but released after some months due to the intervention of Lal Bahadur Shastri, the then Home-Minister, and Jayaprakash Narayan. Besides underscoring Dharampal’s impetuously forthright nature, his provocatively critical stance succeeded in sparking off a public debate, partially carried out in the press.[8] The issues raised were of fundamental importance in the post-Independence political arena – such as the need for patriotism (as distinct from nationalism), the deconstruction of the personality cult around political figures, in particular Nehru, and the importance of freedom of expression in a democracy.

Dharampal’s sincere patriotic commitment coupled with an unerring talent for striking a sensitive chord in public discourse was exhibited time and again. The cogency of his arguments as well as his search towards fathoming ‘the soul of India’ (as he phrased it), however, were to receive more historical depth as a result of archival research carried out in the Tamil Nadu State archives: It was as Director of Study and Research of the All India Panchayat Parishad (1963-1965) that he produced a detailed examination of the Madras panchayat system.[9] This pioneering study – of which short sections are being reproduced in this volume – underscores how the indigenous panchayat-based polity was destroyed: According to his findings, the colonial land revenue system, introduced at the beginning of the 19th century, sapped the resource base of the local polity. This economic extraction was further compounded with systematic political and bureaucratic intervention. Then, towards the end of the 19th century, a colonially defined bureaucratic apparatus was set up which remained out of synch with the real needs of local communities.[10] That this dysfunctional system was maintained even after Independence, more or less unchanged – despite its debilitating influence – constituted, according to Dharampal, one of the main causes for the highly detrimental disjuncture between the need for self-empowerment at the grass-roots level (as propagated by Gandhiji) and Nehruvian centralised statist planning.

[1] In London, working with Peace News (a journal published by the War Resisters International, focusing on peace issues and nonviolent social change), he reflected on India’s role in global developments (formulated in letter-form to Shri Ram Swarup, and as a separate note in January 1957).

[2] By ship, visiting several Buddhist and Hindu holy places in Sri Lanka and South India; in Dhanushkodi and Rameswaram, in particular, he was impressed by the traditional hospitality of the temple pandas.

[3] Its stated objective was the “promotion and strengthening of voluntary effort by helping in the exchange of experiences and ideas and by conducting research and evaluation studies.”

[4] „A Surfeit of Planning: Where are the People? “ AVARD Newsletter, New Delhi, July-August 1960, republished in: Dharampal, Rediscovering India. Collection of Essays and Speeches (1956-1998), SIDH: Mussoorie, 2003, pp. 129-131, quoted phrase on p.130. Intent on influencing political opinion, Dharampal sent this article to all members of the Lok Sabha. It also reached E.F. Schumacher who used parts of it in a lecture delivered in 1962 at the Gokhale Institute of Economics and Politics, Pune.

[5] An Exploration into the Proceedings of the Constituent Assembly, AVARD: New Delhi, 1962

[6] Harijan, December 21, 1947, quoted ibid,  p. 15. The fact that this omission was not remedied, according to Dharampal, contributed towards incapacitating rural Indians from participating in the mainstream of post-independence India.

[7]  This is accessible in digitised form in the archival collection of the Nehru Memorial Museum & Library [NMML], New Delhi.

[10]  This was elaborated in a preliminary note entitled “In-built contradiction between the British structured Indian state and indigenous, or even statutory, local communities or Panchayats”, July 1-5, 1965, 55 pp; later incorporated in Madras Panchayat System, ibid.