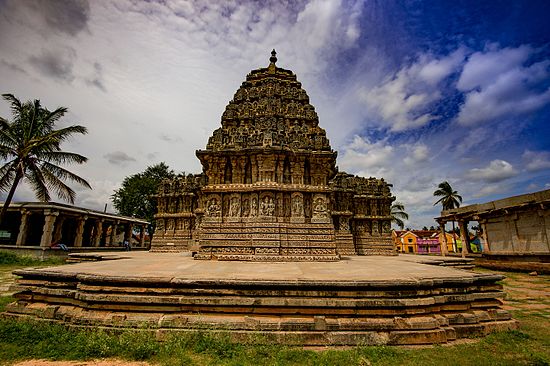 The Sri Lakshmi Narasimha Temple, Javagal is a trikuta (three shrines) Vaishnava temple. It was built in 1250 AD by the Hoysala King Vira Someshwara (1235 – 1263), the 9th king of the dynasty. Javagal is just 12 km from the famous temple town of Halebeedu, the erstwhile capital of the Hoysalas. It was an important commercial centre in that era. Now only a village, it still tries to claim fame through its ancestral association with cricketing fast bowler Srinath Javagal.

Approaching the temple, its ancient charm is enticing as the two ornately decorated elephants at the entrance of the mahadwar greets devotees; not a conventional gopuram. The grand entrance design is different to that of the other Hoysala temples I visited. The temple complex is enclosed by a high walled compound, which was constructed later during the Vijayanagara period.

The presiding deity of this temple is Narasimha (an avatar of Vishnu), half-man and half-lion who killed the demon king Hiranyakashyap.

On the left (south) is the shrine of Venugopal (playing the flute) and on the right (north) that of Laxminarasimha with his consort Lakshmi. Here Venugopal is depicted as Balya Avastha Krishna, or baby Krishna and hence is without a crown. All the murtis in the temple are made of Shaligrama Shila.

In front of the temple is a Garuda sthamba (pillar), two dwarapalas (gate-keepers) Jaya and Vijaya. This is followed by the ranga mantapa with its lathe-turned pillars, a common feature in Hoysala architecture. From there, one enters the main temple and its three shrines.

The temple plan is simple and is based on the standard Hoysala design. It is a trikuta temple, though only the middle shrine has a superstructure (tower or shikhara) and a sukhanasi (nose or tower over the vestibule). The three equal size shrines are all square in plan and are connected by a common mantapa (closed hall).

The mantapa is preceded by an open porch. The lateral shrines are connected directly to the hall while the middle shrine has a vestibule that connects the garbhgriha (sanctum) to the mantapa.

Since the lateral shrines have no tower projecting over them and are directly connected to the hall without a vestibule, they do not appear like separate shrines from the outside. Rather, they appear merged into the walls of the hall. However, the central shrine is clearly visible from the outside because of its tower, and the sukhanasi that projects prominently from the tower. The lower part of the shrines (below the roof) have five projections per side, these projections being visible on three sides in the case of the central shrine but only on one side in the case of the lateral shrines.

The temple stands on a platform (jagati), another common feature of many Hoysala temples. The platform, in addition to its visual appeal, is meant to provide devotees a path for pradakshina patha (circumambulation) around the temple. It closely follows the outline of the temple, making it stand out to an observer. The tower over the central shrine and the vestibule are intact and very decorative.

Other standard features of a Hoysala temple are the large domed roof over the tower, which is also the largest sculptural piece in a Hoysala temple (called the “helmet” or amalaka) and whose shape usually follows that of the shrine (square or star shape). The original stone kalasa on the top of the tower (the water-pot at the apex of the dome) is missing and has been replaced by a metallic one. The Hoysala crest (emblem of the Hoysala warrior stabbing a lion) over the sukhanasi is also missing.

The decorative plan of the outer walls of the shrines and the mantapa follows the “new Hoysala design”, with two eaves that run around the temple. The external wall panel friezes (140 in all), and the reliefs that abound in this temple have a relaxed quality of workmanship about them, and in no Hoysala temple do these appear more “folkish in character”, in the words of art historian Gerard Foekema. In the “new kind” of decorative articulation, the first bigger eave runs below the superstructure all around the temple with a projection of about half a meter. The second eave runs around the temple about a meter below the first. In between the two eaves are the miniature decorative towers (Aedicula) on pilasters. Below the second eave are the wall panel reliefs of deities and their attendants. The outer wall here is most fascinating! The carved sculptures have stunning workmanship with minute attention to fine details.

The 140 panels include the Chaturvimsati murtis (the 24 forms of Vishnu that personify and embody the 24 elements of the phenomenal world), Harihara, Brahma, Parvati, Tandav Ganesha and many more. The toran shows Krishna killing the serpent Kaliya, better known as Kaliya Mardan or Kaliya Samhara. Many of these sculptures have been sculpted by the famous Hoysala temple artisan Mallitamma. He was a very distinguished sculptor of the Hoysala period with a career spanning nearly 73 years.

Below this, at the base are the six equal-width rectangular moldings (bands) consistent with the “new type” of Hoysala architectural decoration. Starting from the top, the band depicts hansa (birds) in the first molding, makara (crocodiles) in the second, epics and other stories in the third (usually from the epics of Ramayana and the Mahabharata, and stories of Krishna), leafy scrolls in the fourth, horses in the fifth, and elephants in the sixth (bottom-most band).

There are two small shrines in the complex dedicated to Mahaganapati on the left and Chamundeshwari on the right. The ceiling of the Mahaganapati shrine has 108 images of Ganapati while the central ceiling has the Ashta Digapalakas.

The temple complex is large but not as well looked after as the more famous shrines, though when I visited the place some work on planting saplings was underway. It is hoped that the Archaeological Survey of India (ASI), under whose care the temple is, makes it a point to look after the priceless heritage more conscientiously.

Javagal town is located about 50 km from Hassan on NH73. It is 12 km from Halebeedu on the road to Banavara.

Figure 22: The wondrous carvings on the exteriors!

To view more photographs of this temple, see my photo-blog at: https://collectingmoments.in/lakshmi-narasimha-temple-javagal/

Nothing is Everything: How Buddhism and Hinduism are Two Sides of the Same Coin – 3
Seven Astonishing Ideas in Indian Cosmology
The Fourth Way