A Brief History of Indian Science. Some Underlying Principles.

The connection between the outer and the inner cosmos is seen most strikingly in the use of the number 108 in Indian literary and artistic expression. It was known that this number is the approximate distance from Earth to the sun and the moon, in sun and moon diameters, respectively. 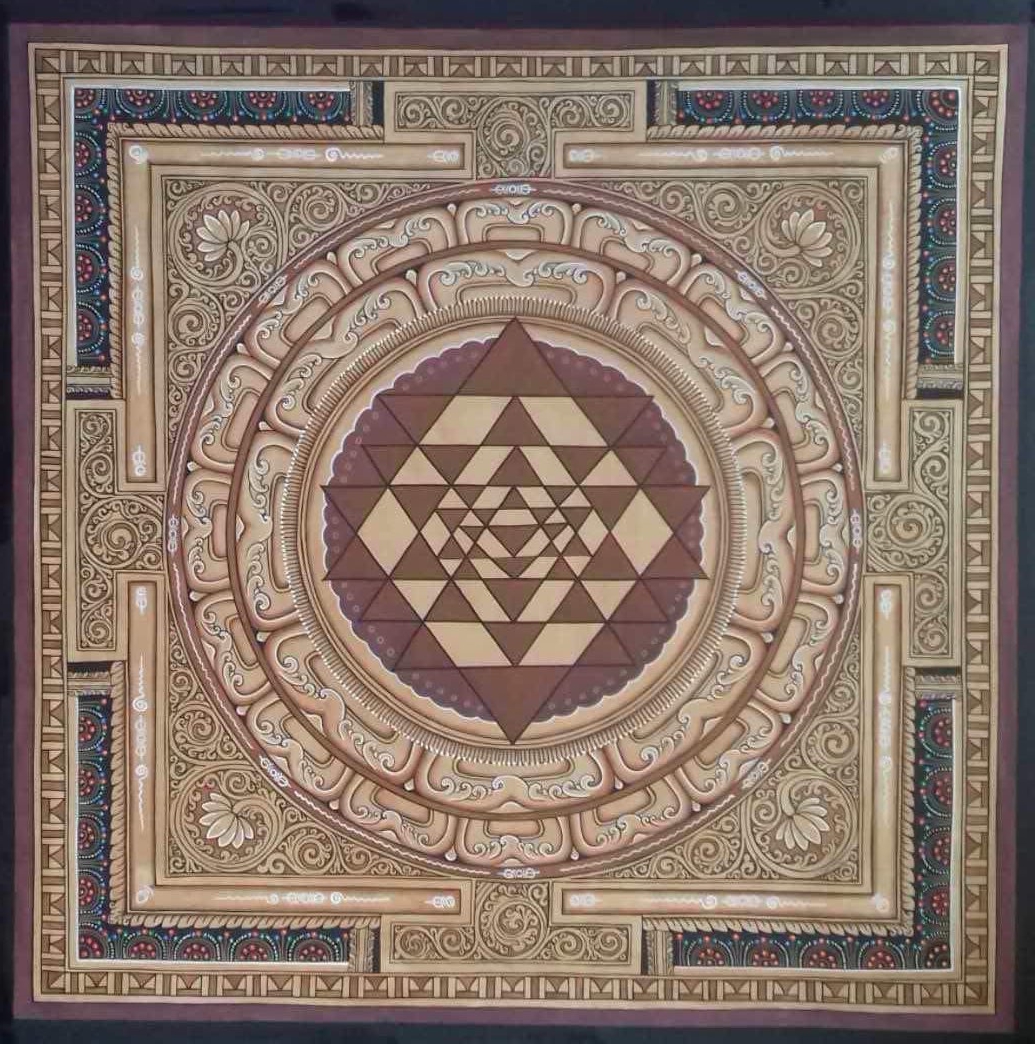 To consider the history of Indian science, one must first know why most educated people know little about it. The reasons go back to the disastrous nature of the British Raj, which it is estimated cost India $45 trillion dollars of wealth, and led to the destruction of native industry and education systems.1 The literacy rate in India on the British watch declined from an estimated 70% to just 12% with a near-complete loss of memory of its previous condition.2 Britain also foisted false narratives of history on India. The curricula that were introduced in school and college were not linked to India’s own scholarly tradition so much so that Indians came to believe India had no tradition of science.

India was the world’s leading nation in science before the Middle Ages. Sa’id al- Andalusi, who, in 1068 in Muslim Spain, wrote Ṭabaqāt al-ʼUmam (Categories of Nations)3 to assess the sciences of different nations, says that the sciences, particularly mathematics and astronomy, are most advanced in India (calling it the first nation). Indian technology was flourishing before the arrival of the British. Economists aver that India’s share of the world economy in 1800 was nearly 25 percent and by the time the British left it had shrunk to about 2 percent.

Shipbuilding required the most advanced skills in the pre-industrial revolution age, and Abraham Parsons, a British traveler, described India’s prowess in this field in 1775 thus: “Ships built at Bombay are not only as strong, but as handsome, are as well finished as ships built in any part of Europe; the timber and plank, of which they are built, so far exceeds any in Europe for durability.”4

In some ways Indian shipbuilding technology was ahead of the European, for in the assessment by historian Dieter Schlingloff5: “The ancient Indian merchant ships differed from the Roman merchant ships in one respect, namely in their multiple masts. While in the entire European area the ships only possessed a single mainsail (and at best a fore-and-aft sail) right up to the late Middle Ages, in India two, and later three sails were common. Of course, the home territory of the Indian seafarers was not an inland sea like the Mediterranean, but the Indian Ocean. Hence they developed a sophisticated system of sails which in number of sails was only matched and surpassed by the explorers’ ships of the I5th century.”

India’s textile industry, which was the best in the world, was decimated by the British. They cut off India’s export markets by a variety of means. The Calico Act of 1721, intended to protect the wool and silk industries, banned most cotton cloths. The Act was repealed in 1774, but Indian textiles entering the British market faced stiff import duties, ranging from 27–59% ad valorem in 1803 to 71–85% in 1813.

When the mechanization brought about by the industrial revolution gave their own textiles a cost advantage, the British made sure that India was not provided the resources to build its own factories. As India became deindustrialized, it turned into a huge monopoly market for British products. British Raj made token investments in science and technology.

Jobs in India simply disappeared. Outside of village crafts, and sparsely staffed revenue and medical departments and schools, one could only find jobs in the army or police or as clerks working for urban enterprises. When the railway system was built by the British, the employees for a long time could only be British or Anglo-Indians.

More and more people became servants and cooks, if they could find anything. They became office seekers: any government position, even if only of the attendant in an office, was considered supremely desirable.

Nearing the end of their depredation of India, the British created national services.  In 1920, India’s scientific services had a total of 213 scientists of whom 195 were British!6  Comparing the path India chose with that of Japan, Sri Aurobindo argued that Japan embraced Western science while keeping to its spirit of the samurai, while India was compelled to abandon its own genius for the security of work in the office to serve the colonialists.7

This was the model that goes back to the British outpost at Fort St. George where Indians kept books or did other menial jobs. This has continued in recent times where Indian companies serve as the back office to Western companies without the ambition to make their own products. Likewise, as a consequence of a bizarre and misguided education policy over the last 70 years, Indian school and college curricula continue to present history through the colonial lens and so most Indians are largely ignorant of their scientific and cultural heritage.8 This essay is a broad overview of Indian science with general references so that the reader can obtain the details easily.

Indian archaeology and literature provide considerable layered evidence related to the development of science and material progress. The chronological time frame for this history is provided by the archaeological record that has been traced, in an unbroken tradition, to about 8000 BCE. Prior to this date, there are records of rock paintings that are considerably older.9

The third millennium is characterized by a very precise system of weights and monumental architecture using cardinal directions. Indian writing (the so-called Indus script) goes back to the beginning of the third millennium BCE, but it has not yet been deciphered. However, statistical analysis shows that the later historical script called Brahmi evolved from this writing.

The earliest textual source is the Ṛgveda, which is a compilation of very ancient material. The astronomical references in the Vedic books recall events of the third or the fourth millennium BCE and earlier. The discovery that Sarasvati, the preeminent river of the Ṛgvedic times, went dry around 1900 BCE, if not earlier, suggests that portions of the Ṛgveda may be dated prior to this epoch.

Briefly, the Vedas speak of a tripartite and recursive world view.10 The universe is experienced in triples: regions of earth, space, and sky; body, breath (prāṇa), and mind; body, mind, and consciousness; past, present, and future. These triples are symbolized in the trinity of Brahmā, Viṣṇu, and Maheśa. The trinity may, on in one’s experience, by seen in dualities. The matter-consciousness and mind-consciousness dualities are represented in the pair of Śakti and Śiva. In the domain of human action, the orders if morality and freedom are represented by Viṣṇu and Śiva.

The outside and the inner processes are taken to be connected. All material systems go though changes with time and this includes the universe. All descriptions lead to logical paradox, and the one category transcending all oppositions is Brahman. Vedic ritual is a symbolic retelling of this conception.

Vedic cosmology may be unpacked into the following seven components that help us visualize the foundations of Indian science in terms of its overarching elements and facilitates comparison with modern views:11

Due to recursion, the complementarity of consciousness and matter manifests itself in many dualities of experience. The world can be seen through the tropes of unity and multiplicity as well as freedom and deterministic evolution. Complementarity is associated with epistemology and ontology and perspectives are described in binary pairs: logic (Nyāya) and physics (Vaiśeṣika), cosmology (Sāṅkhya) and psychology (Yoga), and language (Mīmāṃsā)and reality (Vedānta).

The Sāṅkhya and the Yoga systems take the mind as consisting of five components: manas, ahaṃkāra, citta, buddhi, and ātman. Manas is the lower mind which collects sense impressions, and ahaṃkāra is the sense of I-ness that associates some perceptions to a subjective and personal experience, citta is the ever-altering memory bank. Once sensory impressions have been related to I-ness by ahaṃkāra, their evaluation and resulting decisions are arrived at by buddhi, the intellect.

There is evidence of the knowledge of biological cycles and awareness that there  exist two fundamental rhythms in the body: the 24-hour related to the sun, and the 24   hour and 50 minute related to the period of the moon (the moon rises about 50 minutes later every day). This knowledge is not surprising since monthly rhythms, averaging 29.5 days, are reflected in the reproductive cycles of many marine plants and those of animals. The Ṛgveda 10.90 speaks of these connections by saying that the moon was born of the mind and the sun was born of the eyes of the cosmic self:

The connection between the outer and the inner cosmos is seen most strikingly in the use of the number 108 in Indian literary and artistic expression. It was known that this number is the approximate distance from Earth to the sun and the moon, in sun and moon diameters, respectively.19 This number was probably obtained by taking a pole of a certain height to a distance 108 times its height and discovering that the angular size of the pole was the same as that of the sun or the moon. It is a curious fact that the diameter of the sun is also approximately 108 times the diameter of Earth.

This number of dance poses (karaṇas) given in the Nāṭya Śāstra is 108, as is the number of beads in a japamālā. The distance between the body and the inner sun is also taken to be 108, and thus there are 108 names of the gods and goddesses. The number of marmas (weak points) in Āyurveda is 107, because in a chain 108 units long, the number of weak points would be one less.

C. Alvares, Decolonising History: Technology and Culture in India, China and the West, 1492 to the Present Day. The Other India Press (1991)

S. al-Andalusi, Science in the Medieval World “Book of the Categories of Nations”, edited by Sema’an I. Salem and Alok Kumar. University of Texas Press, Austin (1991)

S. Chakrabarti and U. Patnaik (eds.), Agrarian and Other Histories. Columbia University Press (2019)

G. Ifrah, The Universal History of Numbers: From Prehistory to the Invention of the Computer. John Wiley (2000)

S. Kak, The Gods Within: Mind, Consciousness and the Vedic Tradition (2002)

C.K. Raju, Computers, mathematics education, and the alternative epistemology of the calculus in the Yuktibhāṣā. Phil. East and West 51, 325-362 (2001)