The beautiful Lakshmi Devi Temple, Doddagaddavalli is one of the oldest surviving Hoysala temples. It is another hidden gem about which not much is known. 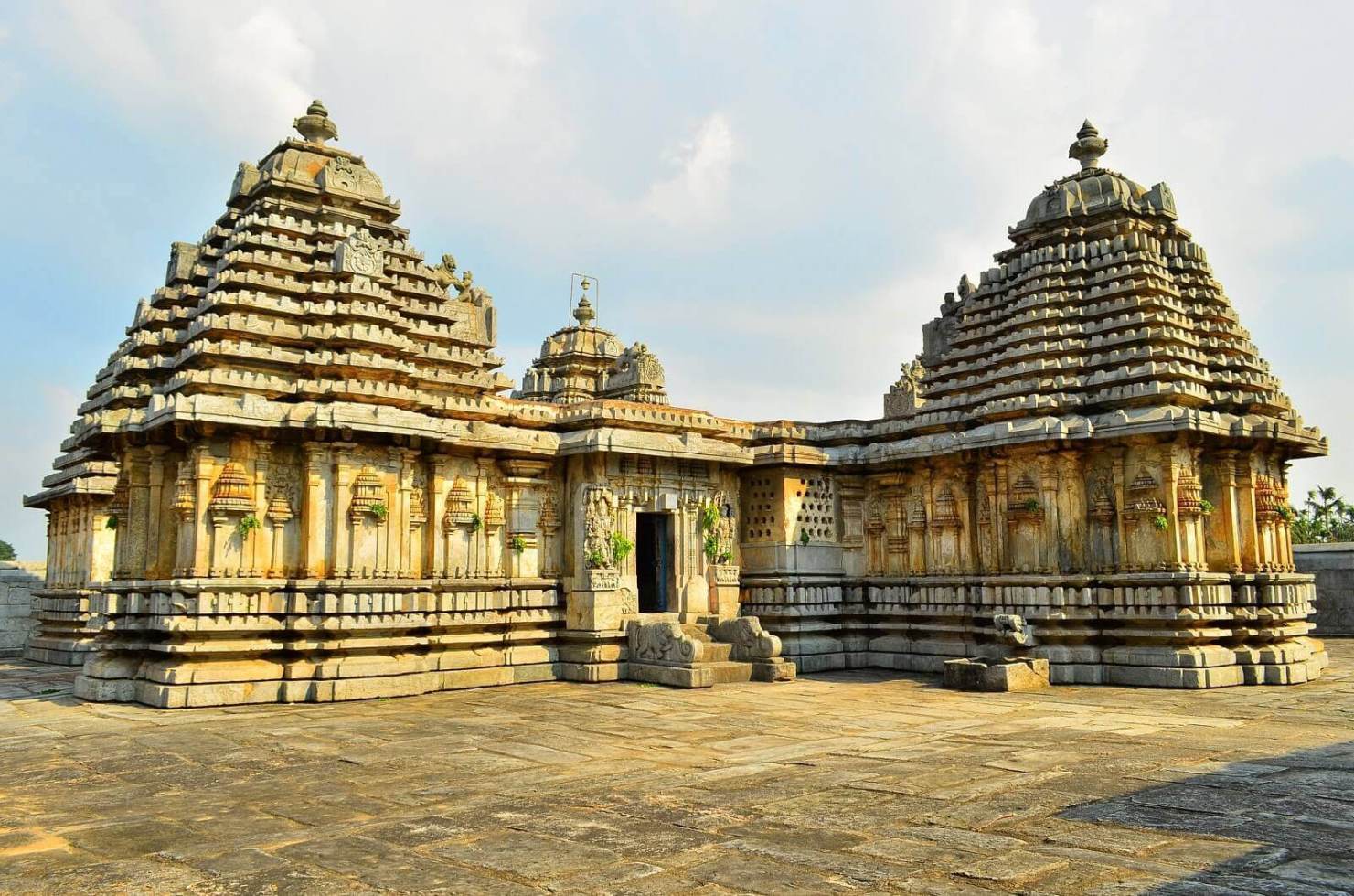 The beautiful Lakshmi Devi Temple, Doddagaddavalli is situated near Hassan, Karnataka, adjacent to a serene lake and is one of the oldest surviving Hoysala temples, having been completed in 1113 CE during the reign of King Vishnuvardhana. It is another hidden gem about which not much is known. It is a live temple i.e. daily puja is performed in the temple, and it is under the protection of the Archaeological Survey of India (ASI).

Doddagaddavalli is a typical village untouched by the modern infrastructure of cities, comprising of brightly painted houses. It hardly gets a second glance from travellers passing by on the highway, except from those who come specifically looking for the treasure it conceals.

The temple has an interesting history behind its construction, having been commissioned by a wealthy local merchant Kullahana Rahuta and his wife Sahaja Devi. The building material used is Chloritic schist, more commonly known as soapstone, which became the standard for numerous temples built during the Hoysala era. The temple is based on a unique chatuskuta design (having four shrines and towers) enclosed inside a 7-foot high walled compound. The temple is known locally as ‘Kalammana Devasthana’.

The other feature which distinguishes the temple is the absence of a jagati (platform), which became common in later Hoysala temple architecture.

The entrance of the temple is from the east through an ornate stone porch built on lathe-turned pillars. The porch leads to the courtyard which has the main shrines.

The four shrines in the complex face the four cardinal directions. In the shrines facing north, south, east and west respectively are the murtis of Kali (a form of Durga), Vishnu, Lakshmi, and Boothanatha Linga (the universal symbol of Shiva). Of the four towers, three are undecorated and are of stepped pyramidal design with a pile of dented horizontal mouldings and a kalasa on top. The fourth tower is intricately decorated (in typical Hoysala design) and is above the main shrine that houses the Lakshmi Devi murti. What is interesting in this temple is that one can find both Shaiva and Vaishnava deities, another uncommon feature from other Hoysala temples.

Three of the vimanas (shrines) have a common square mantapa (hall). The fourth vimana is connected to the mantapa via an oblong extension consisting of two “bays”. The extension has two lateral entrances into the temple. All the vimanas have their original shikhra (tower) intact. The towers are in Kadamba nagara style. Each vimana has a vestibule connecting it to the central mantapa. On top of the vestibule is its own tower called sukanasi (or “nose”). The sukanasi is a tier lower than the main shikhra over the shrine.

All the four sukanasi are intact and so are the kalasha (decorative vase-shaped water pots) on top of the main towers. The Hoysala emblem (the sculpture of a legendary warrior “Sala” fighting a lion) is mounted atop the sukanasi. This temple has suffered comparatively lesser damage from Islamic invasions and consequent destruction.

The mantapa is open and square. The reason for the square plan is the presence of shrines on all four sides of the mantapa with no side open for “staggering”. There is a separate fifth shrine of Bhairava, an avatar of Shiva. This shrine is complete having its own vimana and tower with a kalasa, and a sukanasi with the Hoysala emblem on it.

At the entrance of the chatushkuta are two large stone sculptures adorned with intricate jewellery on either side of the doorway.

The toran on the outer walls of the garbha griha, which opens directly to a mantapa, has six Betalas dancing along with Nagakanya and Vishkanya, usually not found in Hoysala temples. The ranga mantapa (main hall) is dimly lit, having limited perforations in the side walls, and its ceiling is supported by eighteen lathe-turned pillars.

On entering, on the left there are two sculptures of large demonic living corpses called betala. These stand guard outside the shrine of Kali. The nude betalas give a frightening appearance with their tongues hanging out and holding a severed human head and a sword in either hand. The presence of these sculptures indicates the influence of tantra cult in the construction of the temple.

The murti of Maha Kali inside is just the opposite and is serene in its composure. She has been showcased in her Shanta Swaroop. At the foot of the goddess is the demon Shumbha Nishumbha, and she is said to be at peace after killing the demon.

The Shantaswarupa Kali murti, flanked by Shakini and Dakini, became ‘Dakshina Abhinava Kolhapura’ by having the first grand temple for Lakshmi in the South.

The main shrine facing east has a 3-foot-tall murti of Lakshmi with an attendant on either side. She holds a sankah (conch) in her upper right hand, a chakra in her upper left hand, a mala (rosary) in her lower right and a mace in her lower left hand. It is a rare sculpture of goddess Lakshmi in standing posture, since she is mostly depicted in a sitting posture.

Opposite the shrine of Lakshmi is the shrine of Shiva as Bhootanatha Linga, facing west, with his sons Karthik (Subramanya) and Ganesh on his either side.

Other important sculptures are those of Gajalakshmi (Lakshmi with elephants on either side), Tandaveshwara and Yoganarasimha (avatar of Vishnu) found on the doorway of the temple.

The richly carved ceilings have intricate craftsmanship and the panel outside Kali’s shrine show Shiva doing Rudra Tandav and playing the Rudra Veena. Other circular images depict Kubera and Rambha on a horse in the north direction, Agni riding on a one-horned ram and holding his weapon Shakti in the south-east direction, Yama riding his buffalo and holding his danda in the South, Goddess Niruti in her human form in the south-west, and Varuna riding a crocodile in the West. In the centre of the hall is Indra with his consort Indrani riding the Airavat elephant.

The temple has the “older style” of Hoysala architecture, where there is only one eave running around the temple exteriors where the towers meet the wall of the shrine. At the base of the wall of the shrines are five mouldings; between the mouldings and the eaves the usual panels of Hoysala sculptures depicting gods, goddesses and their attendants are, however, missing. Instead, the entire space is taken up by decorative miniature towers on pilasters (called Aedicula).

The village of Doddagaddavalli is on the Hassan – Belur highway, about 16 km from Hassan. The temple is an architectural gem from the early Hoysala era. However, it remains relatively unknown on the tourism circuit of Karnataka. Its offbeat nature, beautiful rustic setting and unique design elements make it a top destination on the Hoysala temple trail.

This is a live temple and the pujari (priest) visits the temple in the early hours of the morning to perform daily puja. Do get his number in advance in case you wish to offer archana or wish to participate in the puja.

Update: On 20 November 2020, miscreants broke into the temple and destroyed the beautiful, and only murti of Kali from the Hoysala era. Despite the temple being under the protection of the Archaeological Survey of India (ASI). Reportedly, the ASI has repaired the murti. Coincidently, the day also happened to coincide with the Tipu Sultan Jayanti. Read more at – Doddagaddavalli – A Requiem For Kalamma 9

Note: To view more photographs of the temples mentioned in this article, see my photo-blog at https://collectingmoments.in/lakshmi-devi-temple-doddagaddavalli/