This is the second part of the travelogue series by Brigadier A.P. Singh in which he describes the temples of South India. This particular article is about the beautiful Chandramouleswara Temple of Arasikere 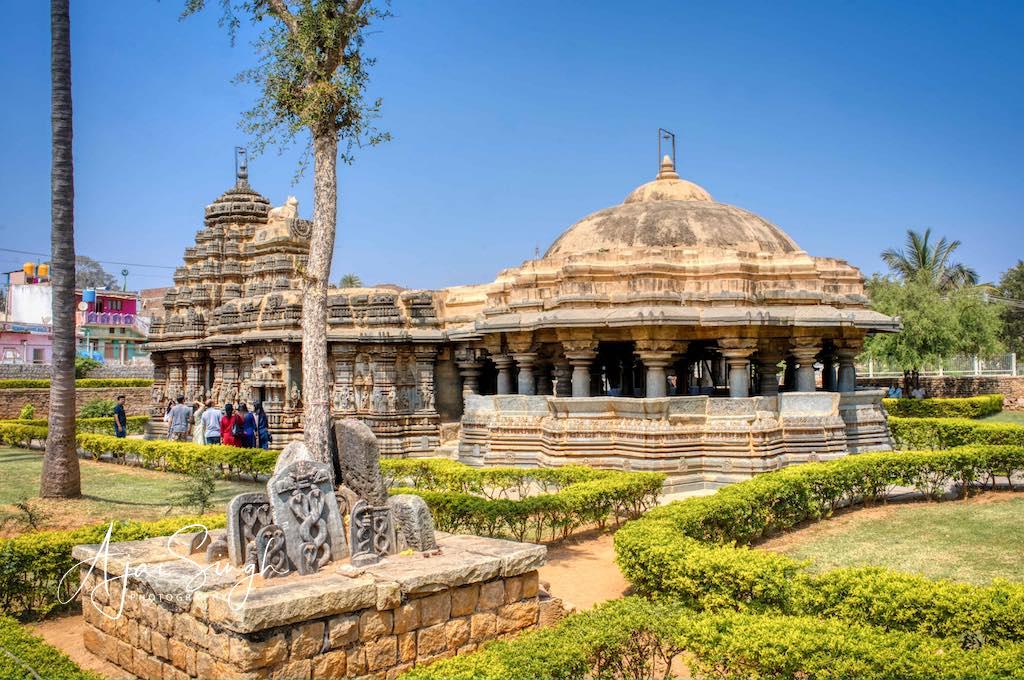 The Chandramouleswara Temple, Arasikere is located in the Hassan district of Karnataka. It is also known as Ishwara Temple. “Arasikere” means “Queens tank” in Kannada, which derived its name from a large water tank built in the 11th century AD by Mahadevi, Queen of Hoysala King Ereyanga (1098–1102 CE). The temple dates to 1220 CE and was built during the reign of Hoysala King Veera Ballala II. It is dedicated to Shiva and is an ekakuta temple (having a single shrine) with one shikhara, two mantapas – one open and one closed. The three units are connected to form a unity. The temple faces east as in all Hoysala constructions. It is a live temple and rituals are performed daily in the temple.

The temple uses soapstone, or chloritic schist, as the basic building material. This was a common building material for the Hoysala era temples, having the quality of being soft when quarried and subsequently becoming hard after exposure to the atmosphere. This quality enabled the craftsmen to engrave minute details in their sculptures, a defining quality in these temples.

Though modest in size and figure sculptures, the temple is considered the most complex in architecture among surviving Hoysala monuments because of its ground plan – a 16-pointed star-shaped mantapa (hall), in addition to an asymmetrical star-shaped shrine, whose star points are of three different types making the design complicated and unusual.

It is interesting to note that there are eight devakoshtas built into the northern, southern, western walls of the mantapa. The mantapa is where the devotees gather. The stellate mukhamandapa has a central circular raised dais surrounded by the stellate jagati with thirteen circular lathe-turned pillars placed at the periphery of the circulars dais, supporting a massive circular dome-like ceiling which is exquisitely carved with trifoliate leaf decorations in concentric circles.

The interior structure consists of Garba griha, Sukanasi, Darshana mantapa, and a Natya mantapa. The sanctum (garbhagriha) enshrines a Shivlinga.

The Darshan mantapa has small shrines dedicated to Veerabhadra, Ganapati, Brahma, Vishnu, and Ashtadikpala. It is a square hall without any window and has six pillars and nine bays of ceilings supported by four lathe-turned pillars.

The central ceiling in the closed mantapa and the vestibule are decorated elaborately. They are intricately carved with flowers and filigree work in a variety of designs.

The Natya mantapa is a circular closed structure supported by 21 lathe-turned pillars and an irregular star-shaped dome. The ceiling here is intricately carved in the shape of an inverted lotus.

The shrine has a tower (shikhara), which is intact and it has a decorated water pot like sculpture (kalasha) at the top. The outer wall of the shrine is decorated with figures of deities, stories from Puranas and the epics. A Nandi bull is placed on top of the Sukanasi (the ‘nose’ in front of theshikhara) instead of the regular Hoysala emblem, and appears to be a later addition.

There is a secondary hall on the right side of the temple with 24 lathe-turned pillars. The hall has three shrines dedicated to Veereshwar, Bakeshwar, and Chamundeshwar. This hall does not have extensive carvings and is relatively bare.

The elegantly decorated ceilings, the domical ceiling of the open mantapa, the sculptures of Dwarapalakas (door keepers) in the closed mantapa (also called navaranga), the wall panel images numbering a hundred and twenty on pilasters between the aedicules, or miniature decorative towers, carved on the outer walls are noteworthy. However, many of the sculptures have suffered extensive damage. Some of them are beyond recognition. While some are defaced, some have had their limbs/arms chopped off in the manner followed during Islamic invasions.

Shivaratri and Kartik Amavasya are two major festivals celebrated in the temple.

Arasikere is 41 km from Hassan and 200 km from Bangalore.

A small but beautiful temple, words are not enough to describe the precise craftsmanship of the sculptures and the geometric patterns carved in stone. It has intricately carved figure sculptures depicting work of extreme dexterity. This craftsmanship can rarely be matched anywhere else. It’s a must-see for every Indian to grasp the vast heritage of our land. Unfortunately, the temple is not very well known, especially beyond Karnataka, and so it is off the radar of most major tourist websites/operators.

The beauty of temple architecture can be experienced through visiting the place. The next best option is viewing high-resolution photographs. Photographs of Chandramouleswara Temple can be seen on my blog at https://collectingmoments.in/chandramouleswara-temple-arasikere/

Shef’s Dharmic Trail. Odisha Odyssey
Book Review on “The Dawn of Everything”
Is the Caste System the main reason for the religious conversion of lower castes? : Missionary debat...