The Wonders of Hoysala Temples

This is the first part of a travelogue series by Brigadier A.P. Singh in which he describes the wonderful architecture of the temples of South India 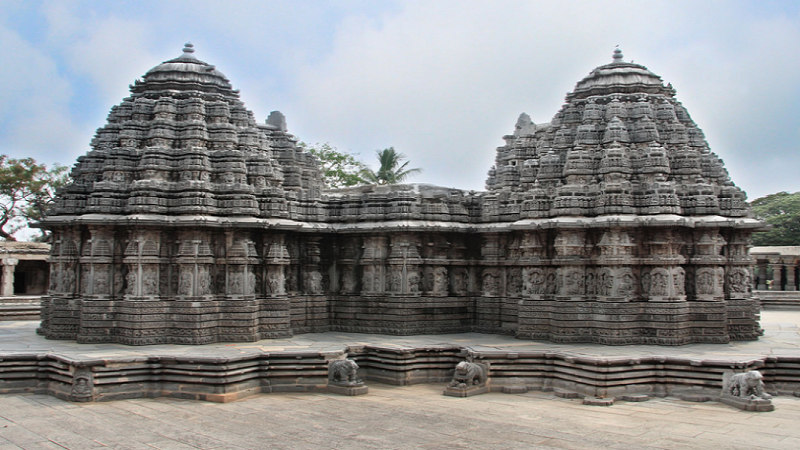 It is a “marvelous exhibition of human labour to be found even in the patient east and surpasses anything in Gothic art”.

India is known for a variety of exotic destinations covering its 5000 year-old civilization. Unfortunately, many of these destinations are unknown to the outside world; most are not even visited by the locals.

Among the truly great wonders are the temples created by the Hoysala kings in the period between 11 to 14th century CE. Each temple is a piece of art with exceptionally intricate sculptural artistry and they are far beyond being temples for mere worship. They represent the acme of artistic and cultural accomplishments of the dynasty. They are stunning expressions of spirituality for carrying out practice and attaining realization.

The Hoysalas built more than 1500 temples, of which around 100 survive today.

Figure 1: The entrance of the Hoysaleshwar Temple

I accompanied a heritage tour organized by Swarajya with the renowned Art Historian, Dr Raghvendra Rao Kulkarni in Feb 2020 to some of these sites. The visit left me spellbound at the splendor of the intricate workmanship.

We started with a visit to the Chandramouleswara Temple, Arasikere. It is also known as Ishwara Temple. “Arasikere” means “Queens tank” in Kannada. The temple was built in 1220 CE. What makes the otherwise ordinary sculptural decorations of the temple unique is the floor plan – perhaps the most complicated and unique of all Hoysala temples. It has a 16-pointed star-shaped mantapa (hall) and an asymmetrically star-shaped shrine. The mantapa is lined with 21 beautiful lathe-turned polished pillars. The ceiling is intricately carved in the shape of an inverted lotus.

The temple is dedicated to Shiva and is an ekakuta temple (single shrine) with one shikhara, two mantapas – one open and one closed. The three units are connected to form a unity.

The outer wall of the shrine is decorated with figures of deities, stories from Puranas and the epics. A Nandi bull is placed on top of the sukanasi instead of the regular Hoysala emblem.

Our next visit was to the exquisite Amrutheshwara Temple located in the village of Amruthapura in Chikmagalur district. It gave a deceptively small look externally, but we were surprised at the number of wonders it held within. It was built in 1196 CE and is an ekakuta temple dedicated to Shiva and built close to the Bhadra River reservoir. Along with the idol of Shiva, which has been brought from river Gandaki in Nepal, an idol of Sharadha Devi is present on its right. An interesting feature of the Temple is that the lamp in the temple has been burning for the past 200 years!

The shrine layout is square in shape and it has its original shikhara, which is adorned with sculptures of Kirtimukhas (demon faces) with miniature decorative towers. The rows of polished lathe-turned pillars that support the ceiling of the mantapa are an outstanding feature of the temple.

The outer parapet wall of the open mantapa has a total of 140 sculpture panels with depictions from the Hindu epics. A distinctive feature of the temple is the balustrade of the open or outer mantapa, which has over 100 miniatures of temple tower-like structures as part of the decorative swirls in bas-relief.

The next morning, we were at the beautiful Lakshmi Devi Temple, Doddagaddavalli. It is situated adjacent to a serene lake. It was built by King Vishnuvardhana and is one of the oldest surviving Hoysala temples, having been completed in 1116 CE,

The temple is based on a unique chatuskuta design (having four shrines and towers). The four shrines are dedicated to Kali, Lakshmi, Shiva and Vishnu, which are in the four cardinal directions. Only the tower of the main shrine is well decorated and it houses the 3-foot-tall Lakshmi Devi murti with an attendant on either side. On each side of the entrance to the garbha griha are two big images of Kalika bodyguards. Their presence shows the influence of the tantra cult in the construction of the temple.

The richly carved ceilings depict different bhagwans on their vahanas. A unique aspect of the temple is the shrine, in the north, dedicated to Shantaswarupa Kali, flanked by Shakini and Dakini. This is unlike other Hoysala temples that are mostly dedicated to either Vishnu or Shiva.

The Sri Veera Narayana Swamy Temple, Belavadi, is another temple that amazed us with the craftsmanship within. In ancient times this village was known as Ekachakranagar, where in the Mahabharata Bhima killed the demon Bakasura. This trikuta temple was built in 1200 CE by King Veera Ballala II and is among the bigger Hoysala shrines. This temple has amazing architecture, as compared to the more famous temples of Belur and Halibeedu that are more famous for their intricate sculptures.

All the three shrines have images of Vishnu, though in different avatars. The central shrine is an older shrine and has a tall image of Veernarayana Swamy standing under a Kalpavriksha. It has been certified by ASI as the best Krishna Murti of India. Its beautiful carving makes you feel His divine presence.

All three murtis are made from Ekashila Shaligram.

A unique aspect of this temple is its trikuta vimana and the stunningly beautiful murtis. Emphasis is more on the inner beauty of the temple and Vigrahas.

One of the most famous Hoysala temples, the Hoysaleshwar Temple, Halebidu was next on our itinerary. At the zenith of the Hoysala Empire, the capital was shifted from Belur to Halebidu that was then known as Dorasamudhra. The Hoysaleshwara temple is the most exemplary architectural assemblage of the Hoysalas existing today. It was built in 1121 CE during the reign of King Vishnuvardhana Hoysaleshwara. The temple is a dvikuta (two shrines). The two garbha grihas are connected by a mantapa (porch) forming a large open hall. One shrine is dedicated to King Vishnuvardhan and the other to his Queen Shantala, hence named as Shantaleshwara.

More sculpturally and artistically sophisticated than any other Hoysala temple, the Hoysaleshwara temple is known for the more than 340 large reliefs that run all along the outer walls.

The temple of Halebidu has been described by Percy Brown as an “supreme climax of Indian architecture.”

Close to the Hoysaleshwar Temple is another famous temple, the Kedareshwara Temple, Halibedu. This temple was constructed in 1219 CE by King Veera Ballala II and his Queen Ketaladevi, and its main deity is Ishwara (another name for Shiva). The temple is estimated to have taken 80 years to complete.

This is a Shaiva trikuta (three shrines) and follows a stellate plan (star-shaped) built on a raised platform, or jagati. It is famous for its figure sculptures and the bhava (expression) they depict.

The murtis of all the three deities are missing, as are the superstructures.

Near the Kedareshwara temple is the Jaina basadi (basti or complex). The Parshvanatha Temple is one of the larger temples in the complex. It comprises of an ardhamandapa (half hall) and a mahamandapa (large hall) and it was our next halt. The temple was built in 1133 CE by King Vishnuvardhan to celebrate the birth of his son Narasimha I.

While the temple is rather plain from the outside, it has beautiful, lathe-turned pillars inside, bearing delicate carvings. The roof also sports intricate carvings. The idol here is 18-feet tall and is carved out of black stone and bears a 7-headed serpent on its head.

The next day we visited another notable Hoysala temple, the Chennakeshava Temple, Belur. The city was so revered by the Hoysalas that it is referred to as “earthly Vaikuntha” (Vishnu’s abode). Belur was the first capital city of the Hoysalas and the Chennakeshava temple complex was at the centre of the old walled town located on the banks of the Yagachi River. It was commissioned by King Vishnuvardhana in 1117 CE and took 103 years to complete.

The temple is an ekakuta (one shrine) and the garbha griha houses an enshrined image of Krishna (Chenna means beautiful and Kesava is another name of Krishna). The richly sculptured exterior of the temple includes sculptures, iconography and horizontal friezes, which cover the entire external walls.

The next temple we visited was another exquisite one, though smaller than most others. It was another Chennakeshava Temple at Arakere.  Much plainer than most other Hoysala temples, this small shrine is nonetheless beautiful. This is a trikuta Vishnu temple built in the 13th century. The three shrines house Vishnu as Chennakeshava in the west, Venugopal in the south and Lakshmi-Narasimha in the south.

There is a single shikhara above the western shrine, which has a sukanasi in front of it. The outside walls have representations of the avatars of Vishnu with tall pilasters and single-pilaster turrets in between.

The Lakshmi Narasimha Temple, Javagal is a trikuta temple that one enters through a Vijayanagara-era Mahadwar with elephants on either side. The Hoysala King, Vira Someshwara, built it in 1250 CE.

The presiding deity of this temple is Narasimha (an avatar of Visnu) who slayed the demon king Hiranyakashyap. On the left (south) is Venugopal (playing the flute) and on the right (north) Laxminarasimha is with his consort, Lakshmi.

The outer walls here have 140 wall panel images, each made with great attention to fine details.

The journey to these amazing wonders of our heritage was beyond words. Unfortunately, these works of art have not been publicized much and remain relatively unknown even to most Indians. After seeing the unbelievably intricate craftsmanship of the monuments, one is inclined to question the basis of declaring a site as a World Heritage Site. While promoting India abroad through various channels, it is sad that these sites do not find any mention.

Note: To view more photographs of the temples mentioned in this article, see my photo-blog at: https://collectingmoments.in/hoysala-temples/

The wonder of Abhinav Gupta (Part 1)
The Chennakeshava Temple – the Marvel of Belur
Demilitarizing the Rigveda (Part 2): A scrutiny of Vedic Chariots