In this excerpt, Doris Srinivasan explains why rituals should be considered a potential source for the origin and significance of Hindu iconography. 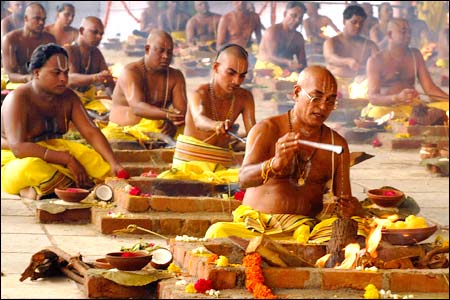 It is proposed that we look at the Vedic ritual as a three-dimensional, living icon whose properties could provide models upon which to construct devotional icons.

To demonstrate the potential of this heretofore untapped source, it can be shown that the physical properties of a great public ritual help us to gain an understanding of the iconography of the Pancamukha linga. We are now quite certain that the linga of Siva, whether plain or encircled by heads, was devoid of priapric symbolism. A philological perusal of the term linga in Vedic and early devotional literature determines that linga is the first ‘sign’ of the transcendental Siva. It expresses belief in the immanence of the transcendental in nature.The “Sign” is in the form of a phallus to symbolize god’s capacity to produce life itself. The significance of the heads has as yet not been fully understood. Here is where the orthopraxy connected with the Vedic Agnicayana ritual is helpful.

The name of this ritual signals its most distinctive feature; Agnicayana means “the piling (of bricks to build for the altar) of fire”. The main fire altar is in the shape of a huge bird whose wing span is about forty feet. The altar consists of five layers of baked bricks; in all there are a minimum of a 1,000 bricks, of various shapes and names specified in the texts. Were we confined to these texts alone, the visual dimensions of this complex twelve-day ritual would be hard to assess. Quite wonderfully, a full visual documentation of the ritual is available. The Agnicayana was performed in 1975 by Nambudiri Brahmans of Kerala. The Nambudiris have made it a chief interest of their community to preserve and cultivate some of the traditional Vedic knowledge. Their entire performance of the ritual was taped, filmed and photographed by a set of Western scholars. The following is based on the documentation of the actual performance together with the descriptions in the ancient texts.

“Anga” or limb brick – of which there are five

Prajapatya – one brick for the god Prajapati, Lord of Creatures

Rsabha or bull brick – of which there is one

Lokamprna or space fillers – of which there are forty

This schema, repeated in all the layers, has some noteworthy features. It is most interesting that the five “mukha” or “head” bricks are immediately followed by five “Anga” or limb bricks. The “Anga” bricks are also placed in a directional pattern; actually they are placed in close proximity to the “mukha” bricks. No other set of bricks correlates in this manner.

Apparently, the “mukha” and “Anga” bricks are meant to define a unit. That unit seems to be a “body” having multiple heads and limbs. From this it may be deduced that the term mukha need not simply mean “head”; it can connote “head (or the first element) when more of the body is forthcoming”. The “mukha” bricks usher in more than the anthropomorphic entity; they also usher in a cognate theriomorphic entity, to judge from the “bull” brick forming part of the series. This theriomorphic entity evokes the realm of Siva. The bull is, of course, the theriomorphic form of Siva. The anthropomorphic entity may well be associated with the Vedic forerunner of Siva, Rudra. As soon as the building of the Agnicayana altar has been completed, a liturgical chant and oblation are offered to Rudra. This is the Satarudriya litany.  The offering and chant are made over one distant brick (No. 189 in the northern section), in the fifth layer of the altar. This is the appropriate place to give homage to Rudra for “in that region lies the house of that god”. The homage extols Rudra as the creator of life and as the rhythm in life. The good and the bad, the big and the small, the ugly and the sublime are all expressions of him. From this long and powerful litany, here are some excerpts;

Homage to the turbaned wanderer on the mountains (cf. Pl. 14.4)

Homage to the wearer of the knotted locks and to him of the shaven hair (cf. Pl. 14.4 Right).

The Sanskrit of the last stanza reads: namah swaya ca swataraya ca. it is of course Rudra’s epithet, Swa, “the auspicious One” which becomes the name of the god in Hinduism. But already a connection between the name “Rudra” and the name “Siva” is made in ancient Hinduism. The connection occurs in a story related in Katha Aranyaka (II. 98-101).

In sum, physical properties in the Agnicayana reveal many elements suggestive of the iconographic properties found in the Pancamukha Linga of Siva. First, in both ritual and icon, “mukha” is associated with the number “five”. Second, in both ritual and icon, the five mukhas are placed in the four directions and in the center. Third, in both ritual and icon the center is symbolically associated with procreation; in the Pancamukha Linga icon, that symbol is, of course, the Linga itself. It may now be noted that a brick located in the center of the Agnicayana altar (i.e. Brick No. 4 in the First layer) is called Retahsic, or “Semen Discharging”, and that, just like a vertically extended Linga, one Retahsic brick is again placed in Layer Three and another in Layer Five above and in the same space as the initial Brick No, 4. Fourth, the heads of the icon seem to answer epithets of Rudra contained in the Satarudriya litany chanted immediately upon completion of the piling of the altar. Parenthically, the domain of Siva is also acknowledged by the presence of the “bull” brick in the series of bricks initiated by the “mukha” bricks. Still, it is a big jump from bricks in an altar to heads on the shaft of a linga.

But perhaps here too, the ritual was the catalyst for bringing these shapes together. The ritual demands the use of round, wooden goblets for some oblations made for the gods. One fo the goblets, the rtu-patra is described in another Vedic context as having a head (mukha) on both sides. In 1975, the carpenter, under the direction of a Nambudiri, turned out simple cylindrical goblets with one or two heads on the cylindrical shaft (Pl. 14.21). it should be quickly registered that these recent goblets made under the direction of a Nambudiri (cf. fn. 39) could be considered as dubious evidence in support of our thesis. A goblet with two “mukhas” could well be a vessel with two months (or spouts), for this is the other primary meaning for mukha: indeed, in a recent album of sacrificial utensils, the Rtugraha ladles are shown having a beak on both sides. Nonetheless, in the present context, the Nambudiris’ goblets are too provocative not to mention.

To establish the origins for an iconography seen on an artistic representation, it is usual to seek antecedents in prior artistic representations. In effect, postulating antecedents in perishable wood or clay for the extant early Hindu stone icons reflects a desire to continue this approach. But the case of the Pancamukha Linga indicates a different predicament. Here is a form suddenly appearing with a full-fledged iconographic language for which there is no pre-existing artistic model in sight. The Bhita Pancamukha Linga is an invention. Where did the form come from? It is here proposed that the visual aspects of a ritual stimulated the invention of the new iconic shape. For this to happen, there must however be present the religious and/or social possibilities for the transmission of orthopraxy into iconography. Influencing factors must be permitted to move from a performing media to a representational media. In India, during the several centuries around the Christian era possibilities to transpose ritual into icon existed.

This period saw the performance of impressive Srauta rites. Three sites at Jagatgram in Dehra Dun District have been identified where a king performed four Asvamedha rituals. Each site contains an eagle-shaped altar. Inscribed bricks from the first site mention that king Silavarman celebrated four Asvamedhas at Jagatgram. One inscription from the first site has been dated to the third century A.D. At the outskirts of Kausambhi, near to the present city of Allahabad, a large altar in the shape of a bird has been found.

It is not clear whether the altar, which may date to the second or first century B.C., was built to perform the Vedic Purusa medha, as the excavators claim. In any case, it did function as an altar in some kind of ritual in antiquity. At Itgi in Belgaum district, a vessel identified as the ukha, needed in the Agnicayana, was found; the excavator dates the pot to the first century B.C./A.D. Andhra Pradesh has yielded inscription of the second-third centuries A.D., which indicate that rituals such as the Asvamedha were performed by the Iksvaku Kings.

The Nanaghat inscription, in Maharashtra, begins with an invocation to several gods including the Bhagavata gods Samkarsana and Vasudeva-Krsna, the inscription then continues to describe the amounts of sacrificial fees the donor paid to the priests who performed a number of Vedic sacrifices. This inscription dates to the first Century B.C.

The Ghosundi inscription from Rajasthan belongs to the same period; it mentions that the Asvamedha was performed for the same Bhagavata gods, Samkarsana and Vasudeva-Krsna. A certain absence of tension between ancient Hinduism and the emerging sectarian Hinduism already alluded to, is again recognizable in these documents. This fluid religious atmosphere, wherein influences and allegiances could flow with a certain ease, should have enabled the transmission and adoption of certain ritual forms into certain sectarian contexts.

All this is not to imply that the Agnicayana directly (or solely) inspired the form of the Pancamukha Linga. Ritual can be depicted in art, but art need not depict the exact nature of the ritual. It is to imply that if inquiry into the antecedents of this Hindu image is made, then such an inquiry must consider the Agnicayana as a possible source. In general, ritual orthopraxy should be considered as a potential source for the origin and significance of aspects in early Hindu iconography.

In particular, ritual orthopraxy has much to recommend it as a potential source for the shapes of some images with multiple bodily parts for it can also transmit a meaning for a multiple bodily part. The same Agnicayana which acts out the meaning of “mukha” also acts out the meaning of “virupa” or “visva rupa” (i.e. Omni form) for the audience at hand.

A “virupa” god, according to the ritual, is one who contains all living forms in his middle, or his “womb”; that meaning is completely in accordance with its meaning in the entire Vedic tradition. Ritual in ancient India may have been the experiential connection between ideas we now consign to texts and iconography we now confirm in imagery.

Ritual is the enactment of a religious reality needing to be repeatedly experienced. It imparts notions about this reality through words, gestures, postures, colors, objects and their arrangements. Given the possibility for an historical rapprochement between the performing media and the representational media, any one of the ritual elements can function as a pictorial model making available an iconographic language upon which an incipient art can draw. 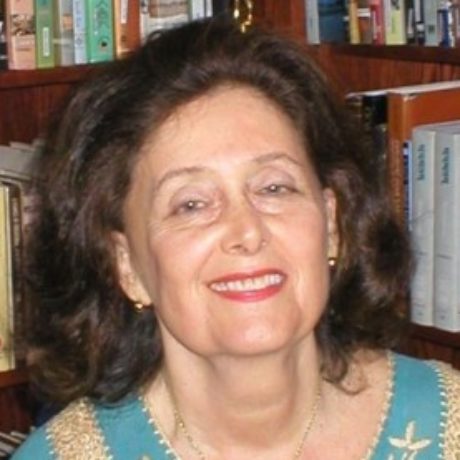 Doris Meth Srinivasan is a Professor of Indological studies. She has authored more than 75 publications. She was curator of South and South East Asian arts at Nelson-Atkins Museum in Kansas City, Missouri.