The Peculiarity of Harappan Civilisation

How was Harappan civilisation different compared to other contemporary ancient civilisations of the world? Read on to know. 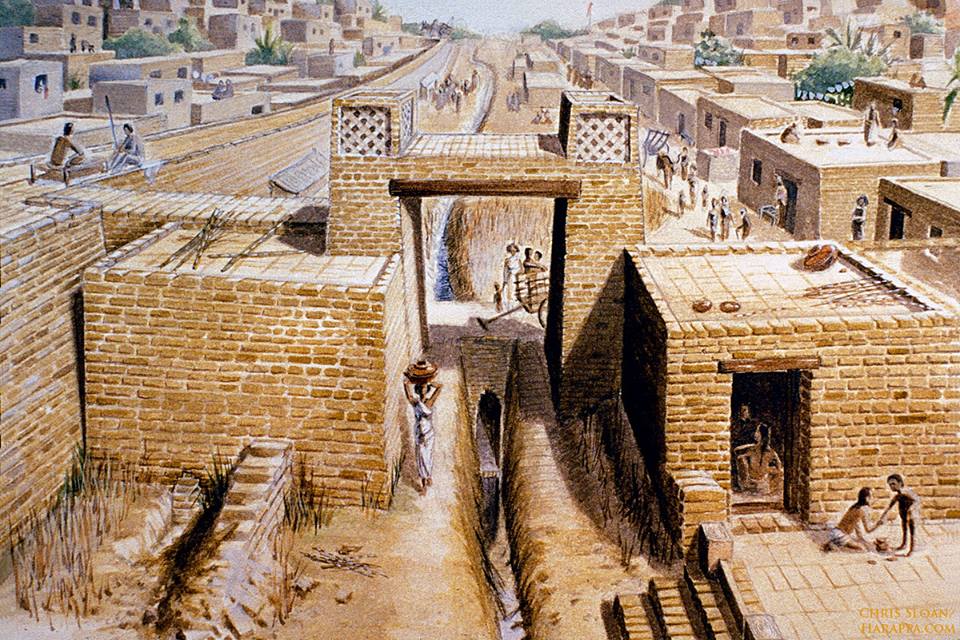 So-called Indus Civilization (sometimes called ‘Harappan Civilization’) came into its ‘Mature’ or urban Phase in the middle of the third millennium, and by the time of Hammurabi of Babylon (1792–1750) had come to an end as a complex civilization. The last substantive contacts with Mesopotamia, to whom the Indus area was known as Meluhha, seem to have been in the early part of the preceding Isin-Larsa Period (2017–1763).

Indus Civilization in its developed form is the shortest lived of the seminal Bronze Age civilizations of the Old World. Nonetheless, as a civilization it is doubly remarkable: first, because it was the only complex society of either Antiquity or the modern world, that operated without social stratification and the state; and, second, in what must be a related phenomenon, because it was an agrarian society in which the villages were not oppressed by the towns. Doubtless the absence of royal or state capitals is significant in this; which is certainly not to say that towns and cities were absent, rather that they were not politically dominant.

Indus or Harappan Civilization is also the one that covered by far the widest area in the third millennium, exploiting a cultivable area approximately the size of France (544,000 square kilometres) from terrain over twice that extent. This is against an area of 33,657 square kilometres for the cultivable valley of the Nile, and about double that in Mesopotamia. Of the four originating civilizations considered here, the Harappan is the second most urbanized, as seen in the comparison made by Ratnagar on p. 188.

But the name Indus Civilization (which is used synonymously with Harappan) is a misnomer. It is so-called from the excavations initiated in the 1920s by Sir John Marshall, at the sites of Harappa and Mohenjo-daro located on the Indus river system. However, work in the last two decades has shown that those cities do not lie at the centre of maximum density of early village settlement, but rather at peripheries. This is especially true of Harappa, which stands in relative isolation and functions as a gateway city for exchanges with pastoralists and for the import of minerals such as carnelian and lapis lazuli from Afghanistan.

The greatest density of villages are clustered along a river course east of but parallel to the Indus called the Sarasvati (the Ghaggar-Hakra drainage system) in Cholistan. Sarasvati is a major Hindu goddess representing abundance and nourishment. It is striking to see her fully clothed and bejewelled effigy being lowered into the now sacred Ganges to ensure those blessings. At the northern end of the Sarasvati village concentration lies the major site of Kalibangan, while at the southern end lies Ganweriwala, unexcavated. At 81.5 hectares, Ganweriwala is almost identical in size to Mohenjodaro (83 hectares) and significantly larger than Harappa (only 65 hectares). Both of the excavated cities are constructed of fired brick. By contrast it should be remembered that half a millennium earlier Uruk had reached 400 hectares and Shuruppak, one of about thirty city-states of early Sumer, reached 100 hectares at about the same time. Nonetheless, given the association of Ganweriwala with the originating village heartlands, when excavations belatedly take place there it may be more accurate to refer to Harappan Civilization as Ganweriwalan Civilization. Indeed, Shaffer and Lichtenstein (1989:123) point out that ‘Harappan Culture represents a fusion of Bagor, Hakra and Kot Diji ethnic groups in the Ghaggar-Hakra Valley’. Sarasvati culture is thus the basis of Ganweriwalan Civilization.

That there are so few cities in such a large area of the Indus drainage and that none of them even attains 100 hectares in extent tells us a great deal about the nature of the civilization there. The most important points are that:

1) With the partial exceptions noted below, the cities contain no palaces or temples, only cultic facilities for fire and water on high platforms in the so- called ‘citadel’ areas, no doubt sources of ritual purification for the whole settlement.

2) The cities only contain a small fraction of the total population, who lived in villages.

3) Within the cities there are few disparities of wealth or power and this is reflected in the architecture of households; instead, differences in size are functional, reflecting family size.

4) Skeletal studies show no health disparities such as would indicate depressed or oppressed classes, but only male/female inequalities which are even present in hunter-gatherer societies (Maisels 1990:221–30).

5) The use of copper implements is very widespread and indeed standardized in form, indicating a general availability, something untypical of other Bronze Age civilizations. In China, for example, bronze objects, especially tripods, are associated with only the most powerful lineages.

In sum, Indus Civilization is by far the most egalitarian of any of the pristine Old or New World Civilizations, and that by a long way and by any measure. This must be correlated with the archaeological absence of Harappan state power, which I have previously (1990:10) defined as ‘centralized social power deployed through specialised apparatuses’; where social power is the ability to make actors do what they would not otherwise do, by the threat of force, other sanctions (e.g. ostracism, excommunication) or inducements.

I postulate that Harappan society was constituted by occupationally specialized lineages and clans, producing a truly organic solidarity that operated regionally, spontaneously, without compulsion and therefore without a state. This accounts for the absence both of a dominant ruling centre and the extremes of power and wealth seen in the other formative Old World civilizations. This need not mean that formal coordination and leadership were entirely lacking, only that a coercive state serving a ruling class was absent.

The largest excavated centres, Harappa and Mohenjo-daro, seem to be functionally specialized to serve their regions and integrate with the broader society on an economic and cultural basis, not a politico-military-ideological basis. Thus I see Indus Civilization as an oecumene, or commonwealth, not a state-ordered society. Accordingly, it is the only complex society known to history that truly merits the name of ‘civilization’ in the proper, non- technical sense (Maisels 1993:205–6). This is the condition of serving the greatest good of the greatest number through advances in knowledge, civility and economic wellbeing shared by all.