The Making of Our Constitution-2

In the second part of this article, Devendra Swaroop takes us on a journey to the origins of our constitution. What were its original aims and how did it come to be introduced in India? 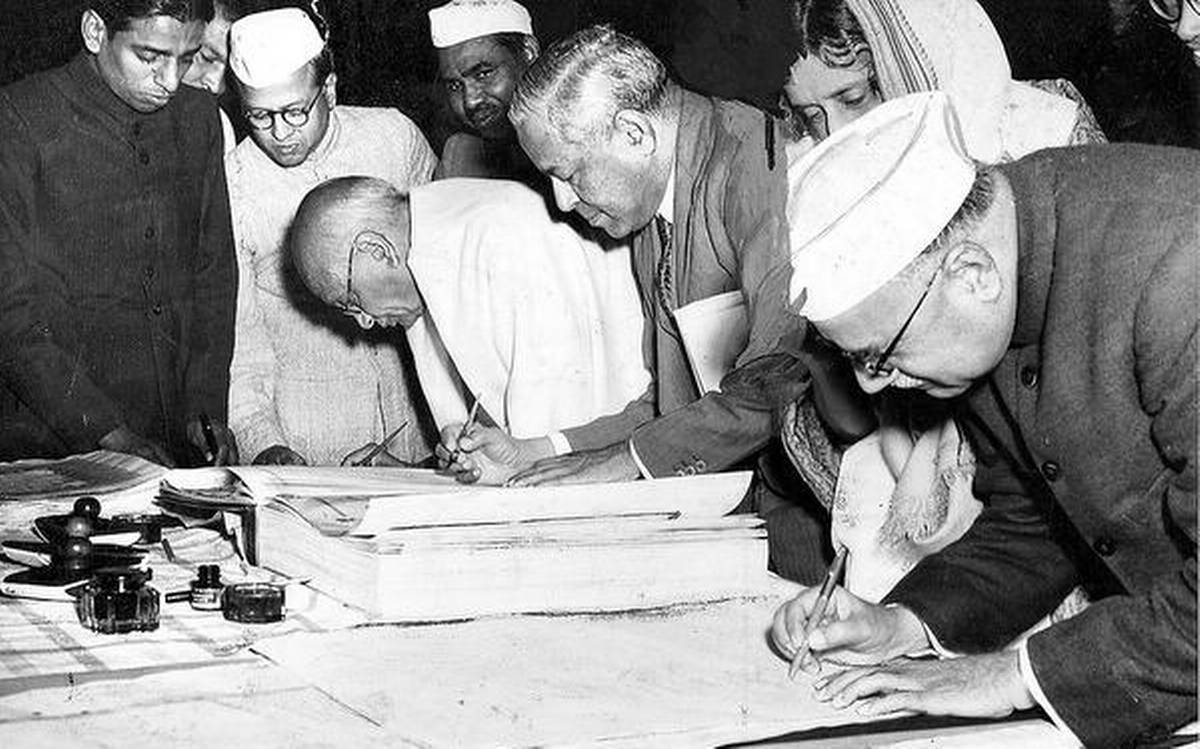 But the warnings of British thinkers such as Stephen and Smith were unheard and ignored like the “sound of a pin in a carpenter’s workshop” and the English-educated Indian mind remained a victim of the illusion created by colonial rulers. The British had firmly ingrained the idea that caste system was the root cause of India’s defeat and prolonged subjugation.

The British rulers knew fully well that the introduction of the British parliamentary system in India would help to further caste discriminations rather than removing them.Therefore, in their bid to completely fragment Hindu society, they were insistent on giving lower castes the right to separate electorate in the India Act of 1935, for which they had begun preparing since the 1911 census. In 1916, they brought up this matter for the first time in the Central Legislative Council by conducting an extensive debate.

From 1917 onwards, various Dalit conferences began to take place. In these gatherings, a demand for separate Dalit rights was raised. But the main challenge was to define the ‘Dalit class’ and the castes that were to be included in this definition, and where to draw the distinction between upper and lower castes. To find answers to these questions was the main goal of the Simon Commission of 1927-28 and the Lothian Suffrage Committee of 1931. The primary objective of the three round-table conferences held in London in 1930-31 was to promote various narrow “interest groups”, in particular Dalits, Muslims, Sikhs and Rajas, that would oppose Indian nationalism.

But, by this time, a patriotic and moral leader such as Mahatma Gandhi had emerged in Indian politics. The Congress led by Gandhiji was rejuvenated. Through the Satyagrahas of 1920 and 1930, a group of patriotic freedom fighters emerged from every nook and corner of the country, every class and caste. There was a network of Congress committees in every village, district and city.  Through his innovative methodology and terminology, Gandhiji misled the British Government. For some time, he had taken away the political initiative from the British government. Yet on 17th August 1932, in a communal judgement, British Prime Minister Ramsay McDonald declared the right to separate electorate for the Dalits.

Gandhiji put all his moral power at stake by declaring a fast unto death which ultimately led to the failure of this vicious cycle to divide Hindu society. But the culmination of this fast, which took place in the Pune pact, gave rise to the Bhasmasura of ‘reservation’. Gandhiji fully understood that the principle of ‘reservation’ would help to deepen rather than to eliminate caste discriminations. But he had to bow down to the colonial powers in the interest of the unity of society. That is where the political game again went into British hands. The Pune Pact of 1932, just like the Lucknow Pact of 1916, was instrumental in making the colonial conspiracy of dividing Indian society a success.

The study of a British document from 1934 will be useful in order to understand the colonial objectives behind the constitutional reform process from 1909 to the Government of India Act of 1935. The document was prepared by a joint committee in London. The Committee was constituted to study the challenges in the implementation of the parliamentary system in India while outlining the India Act of 1935. The report says that out of the four basic pillars on which the British parliamentary system stands, not one exists in India. These four pillars are: 1. Principle of majority rule, 2. Maturity and consensus among the minorities to accept the majority decision, 3. Separation of political parties, not on the basis of narrow interests but on the basis of various national interests and policies 4. A political consensus that is committed not to a particular party but to national interests and policies which alone should be the basis for evaluating political parties. The document says in unequivocal terms that “none of these elements exist in India today.” In their place, we have to face centuries old Hindu-Muslim rivalry which is not only religious but also   civilizational. In addition, there exist various conflicting minorities that view the majority with distrust and suspicion.

Thus, despite fully acknowledging the unsuitability of the British parliamentary system in Indian circumstances, the document recommends that at present it is necessary to adopt a system of constitutional security for communal representation and individual interests. But would this system be provisional? Would we be able to move towards the development of the principled, harmonious national society life once this system is adopted? In response to these questions, the document shifts the entire onus of responsibility away from the British Parliament and puts it on Indians. It says, “These challenges have to be faced, but, instead of the Parliament, Indians themselves have to face them.” It is impossible to predict how quickly political parties would be able to develop on the basis of regional citizenship as well as economic and social policies, and would they be so powerful that they will be able to dissolve the sense of religious and ethnic acrimony that dominates Indian life?”

Knowing all this, the British pushed India on the path of the British parliamentary system by the India Act of 1935. The foundation of the 1950 Constitution of independent India is based on this Act. What we are seeing today is exactly what should have come out of this constitutional creation.

Commenting on the 1937 provincial elections under the 1935 Act, the then Congress President Dr Rajendra Prasad wrote that “it is difficult to say whether the Congress victory in these elections is called the victory of nationalism or casteism.” Even by ignoring all these experiences, independent India has been dreaming of achieving the goal of a caste-free society through this constitutional system and the situation today is that the whole of our electoral politics revolves around the caste system. We have reached such a situation that the caste column, which we abolished in the 1951 census, is being brought back in the 2001 census. Such is the silly optimism of hoping to obtain mangoes after sowing acacia seeds. Even after having experienced this constitutional system for fifty years, there is a large number of people in our country who believe that the Constitution itself is suitable and alright, but it has not been implemented properly. It is believed that if it is properly implemented, the same Constitution will help us achieve our national goals. But does this mindset truly represent the real ideals of our freedom movement?

In the Footsteps of Hind Swaraj. The Oeuvre of the Historian and Political Thinker Dharampal – 7
"Divide and Rule". The British Colonial Policy on Caste
Linear Time and History: A Theological Obsession