The Making of Our Constitution-1

This article from Devendra Swaroop takes us on a journey to the origins of our constitution. What were its original aims and how did it come to be introduced in India? 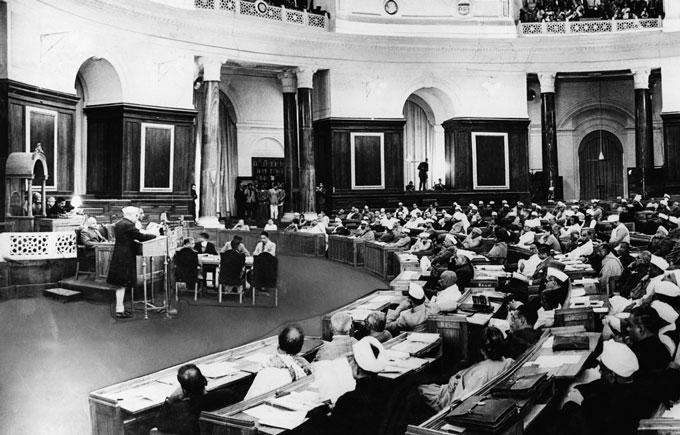 The declaration of the British Parliament on August 20, 1917 to appoint Montagu as the Secretary of State in India was a ray of hope for educated Indians, for it appeared that Britain was genuinely willing to gradually transfer power to India and set India on the path of parliamentary democracy. However, the chief objective of Montagu was not to transfer power but to fragment Indian society into various units with mutually conflicting interests. With a view to fulfilling this objective, Montagu undertook a six month long tour of India beginning from November 1917. During his journey, he met delegations of 108 different institutions that represented various interest groups and he sowed in their minds the seeds of competition with the desire to gain power. Upon his return from India, Montagu announced a new series of constitutional reforms on July 8, 1918. Because he added the name of Viceroy Chelmsford, this series came to be known as the Montagu-Chelmsford document. This document became the basis of the India Act of 1919. But as already mentioned, the drama that began on August 20, 1917 was a mere eyewash since the document had long been prepared behind the scenes by the “Round Table Club” of experts of the British Constitution.

These reforms had been a subject of debate in both Britain and India ever since Montagu delivered his famous speech on August 20, 1917. A section of intellectuals in Britain believed that the British parliamentary system was not suited for India considering that India’s historical development and its contemporary socio-religious perspectives were different from those of Britain. The [parliamentary] system would tend to divide rather than connect Indian society. Sir Harry Stephen’s question was: “How is the rule of accountability, instituted by way of elections, as mentioned in this document to be reconciled with the peculiar caste system of India? The document claims that millennia old divisive barriers like ‘caste’ will collapse only when they go through the election process, but how? This document is totally silent in this regard.”

Towards the end of 1918, renowned administrator-historian Vincent Smith published a small booklet titled “Indian Constitutional Reforms: Viewed in the Light of History”. In the Introduction of this booklet, Vincent Smith wrote,  “I have worked in India for 19 years in the capacity of an ICS officer. Having worked in almost every department of the Government of India, I got the opportunity to closely observe the reality of Indian society. Being a student of history, I spent 50 years of my life in understanding the development of this reality. Therefore, I believe that I am a qualified officer to comment on this document. Having studying this document thoroughly, I have arrived at the conclusion that the theoretical principles on which this document is based do not apply to India. In my view, this document is simply an eyewash. India has played a significant role in my life. Therefore, during the final years of my life, it is my duty to do something in the interest of India and warn her not to fall for  this trap.” With this long introduction, Vincent Smith dealt with the question of religion in India in the third chapter of this book while in the fourth chapter, he analysed these constitutional reforms with reference to the caste system. Vincent Smith wrote that “the authors of this document predict that regional democratic elections will lead to the collapse of caste structures and the emergence of a harmonious national society.” Historian Smith says that either these writers do not know the role and importance of the ‘caste system’ in Indian history or they are deliberately misleading their readers. Smith said that ‘caste’ is not an outer superficial layer that may be worn and removed anytime like a piece of clothing. Such a system does not exist in any other civilization in the world. This is a unique characteristic of India. It is completely enmeshed in the flesh, marrow and blood of Indians and it is the hallmark of Indian society. No Hindu  can think of completely dissociating himself from ‘caste’, nor can he behave in such a manner. Therefore, to give the impression that the process of elections will lead to a collapse of caste is nothing but an eyewash and pure deception. Historian Smith, after a detailed analysis of the subject in this chapter, concluded that the election process based on the British parliamentary system would strengthen the caste system rather than eradicating it. The caste system would become politicized.

The Making of Our Constitution-2
The Reality of Sufi Islam
History of Jagannatha Temple I: From Vidyapati's quest of Nilmadhava to arrival of Darubrahma