Did Sikh Gurus repudiate Hindu scriptures? Was Sikhism fashioned out of a conflict with the Hindu pantheon? In this article, Ram Swarup Ji answers these doubts and shatters many myths. 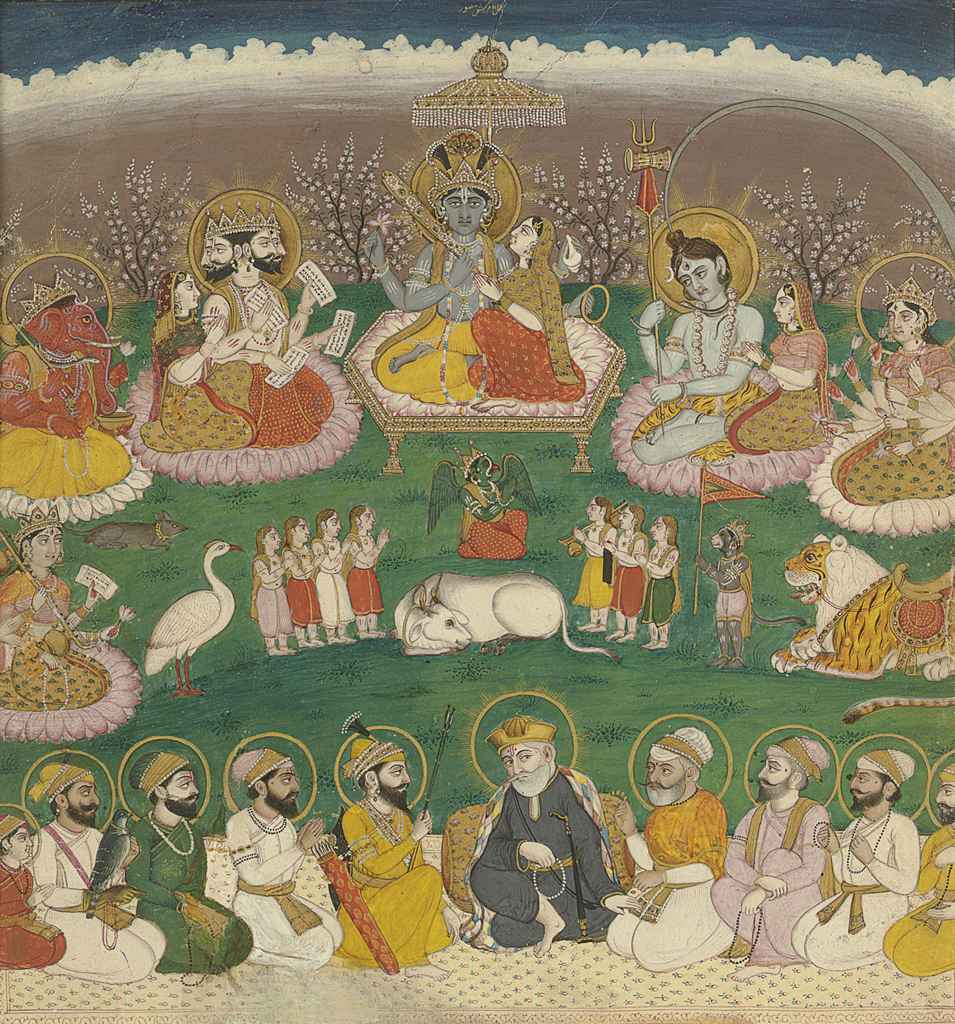 To attain this aim, the Adi Granth teaches the traditional spiritual discipline. The elements of this discipline are control over the sense, devotion to God, reflection on the Self, truthfulness, compassion, desirelessness and a turning away from worldliness. But the Gurus, like other Vaishnava saints, emphasize “Nama simiran”, or the remembrance of Nama. It is said that the remembrance of Rama Nama is best suited to the Kaliyuga (Kali-yuga Rama-Nama adhara), when people are not capable of much tapas and Yoga. In the Sukhamani, the fifth Guru says that “nectar is the name of Hari”, and that by remembering Him constantly, one “conquers fear and duality” and “does not fall into the womb again, and conquers the fear of Yama (death).” But this Nama is not an ordinary spoken word. The true shabad is born in the heart. It is the “unstruck note” and the “unspoken word” (anahatam and asabdam) of the Dhyanabindu Upanisad.

It is obvious from the foregoing discussion that Sikhism belongs to the mainstream of Hinduism in its theology and cosmology, in its fundamental vision of man, deity and the universe, in its spiritual doctrines and praxis. But during the fourth quarter of the last century, an opposite idea began to be actively floated by imperialist and missionary circles which taught that Sikhism was a new religion, that for its inspiration it had other sources like Islam, and that Sikhism repudiated Hinduism’s most intimate beliefs and institutions and practices like polytheism, idolatry, it’s very pantheon and incarnations, its Brahmanism and scriptures, its castes, holy places and its festivals and ceremonies. It could be made out, as in fact it was done in some quarters, that it made for a “purified” Hinduism and it made Sikhism into a “reformed” sect of the parent body. But this view too was out of favor with the new political equation and ideological trend. Many Sikh activists working closely with the British wanted a completely separate identity for themselves and they resented any suggestions that Sikhism derived from and formed part of Hinduism.

In this connection, Gandhi’s experience would be worth quoting. Like most others, he also did “not regard Sikhism as a religion distinct from Hinduism”, but regarded “it as part of Hinduism and the reformation in the same sense that Vaishnavism is”. In 1915, when he visited the Punjab, he expressed this belief at a meeting attended by the Sikhs. A well-meaning Sikh friend took Gandhi aside and told him that he had “unwittingly offended Sikhs by calling them Hindus”. Narrating this story in 1936, Gandhi says that “ever since that caution I have never described them as Hindus”.

The alien rulers decided that the leading ideas of Hinduism were idolatry, polytheism, Brahmanism and other “superstitions”. The fact that these categories belong to Semitic thought and history and have never been used by the Hindus in discussing their fundamental ideas was completely disregarded. Similarly, the fact that the basic ideas that have occupied Hindu sages are Rita, Dharma, interchange between gods and men (parasparam bhavayantah), Brahmavada, Atma-Vada, Advaita, Purusha-prakrti-Jiva, Yoga, Mukti, the four purushartha, Karma and Rebirth, the four stages, the four debts, the divine qualities (daivismapada) like non-violence, truthfulness, friendliness and compassion for all (jiva daya), welfare of the world (loka samgrah), microcosm-macrocosm (pinda–brahmanda), multiple modes and planes of existence psychic and spiritual (lokas), cycles of creations and dissolutions set in a time-scale which should be the envy of modern astronomers and space geographers – all these did not count. The rulers arbitrarily decided that Hinduism was a miscellany of gods and creeds and castes and was idolatrous.

But did the Sikh Gurus really repudiate the things it is claimed they did? For Example, did they reject the Vedas and the Puranas, the traditional Gods and Incarnations and holy places of pilgrimage?

The traditional scriptures are high on the list of these “rejects”. But we have seen how generously the Gurus borrowed from and how much they absorbed their teachings. The Adi Granth speaks with utmost reverence about them. Nanak says that as “darkness is dispelled when a lamp is lighted, so by reading the Vedas sinful inclinations are destroyed”. At another place, he says that if “the Puranas are highly appreciated, and if the wick of fear is applied to this body, the understanding of the truth is kindled unawares”. The fifth Gurus says that “the Vedas, the Puranas and the Smritis have pronounced the correct word. But like most other sages, the Guru also warn that the better killeth, that outer, literal meanings of the scriptures are not enough, that one should imbibe their inner message.

These scholars also tell us that the Gurus rejected Hindu Gods and Incarnation. It may be so but it has certainly not prevented their disciples from pressing these Gods into the service of their Gurus. Nanak’s Janama Sakhis tell us that at the time of his birth “thirty-three crores of Gods paid homage along with sixty-four Jogins and the eighty-four Siddhas because a great devotee has come to save the world”. It is very Pauranik indeed, to say the least.

The Adi Granth speaks often enough of incarnations with respect. It says that in “Sat Yuga, God takes the form of Bawan, in Treta of Rama, in Dvapar of Krishna, and in Kali-Yuga, He puts on the form of Nanak, Angad and Amar.” The Incarnations of Rama and Krishna are specially honored. Nanak’s “heart is pierced by Rama Nama.”

Similarly, Krishna is remembered by his various Pauranik names. He is Vasudeva, Govinda, Madhusudana, Murari, Damodar, Gopal. Events of his earth-life are mentioned. He is the beloved of the Gopis, the cowherd who killed Kansa and Chandura, who saved the honor of Draupadi. At one place, the Adi Granth says that “happy, happy is the flute which Krishna played, and blessed is mother Devaki in whose house, the God, the Lord of Lakshmi was born”. According to Bhagwant Singh Sindhu, the “praise of Vishnu incarnations, Lord Rama and Lord Krishna, are common in the Guru Granth and almost one-third is full of it.”

In the Hindu approach, incarnation has its peculiar aptness. In this approach as man is conceived as God, God is also conceived as man. Man’s deification and God’s incarnations are two sides of the same coin. Ascent and descent go together.

But the trouble starts when we conceive of God and His manifestations too physically, forgetting that both are subtle truths, truths of the Spirit. Rama and Krishna are not ordinary “historical” phenomena; they are psychic truths, transcendental forms. They make sense to an awakening soul and they also help its awakening. For Kabir, God became krishna “on account of Nanda’s devotion”; for Nanak, God put on the incarnation of Nar-Singha “to save Prahlad, his devotee”. In this approach, incarnations take place for the sake of Bhaktas and it is the Bhaktas who give us these incarnations.

We are also told that the Gurus repudiated pilgrimage to holy places. Is it true? Though as a “knower”, Nanak was above pilgrimage, yet he went on an extended pilgrimage, as his Udasis tell us, to Hardwar, Prayag, Varanasi, Gorkhmat (near Pilibhit), Ayodhya, Jagannatha Puri, Rameshwaram, Ujjain, Kurukshetra, Hinglaj, Gorakh-Hatri (a great Natha center near modern Peshawar). At Mathura, he visited Keshaav Rao Temple and bathed in the Yamuna. Registers of the Pandas show that Guru Teg Bahadur and Guru Govind Singh visited Tribeni, and Mata Gujari and Mata Sundari and Ajit Singh, adopted son of Guru Gobind Singh, Visited “Gangaji” (Hardwar) as devout pilgrims. But following the traditional teachings, the Guru also insisted that outer pilgrimage is not enough, that in the true Vedantic way one should also make an inner pilgrimage and find those holy places within oneself.

Nothing is Everything: How Buddhism and Hinduism are Two Sides of the Same Coin - 1
Krsna’s Opening Remarks in the Gita
Sakti Worship in North-East India: A Historical & Cultural Perspective (Part 1)