Did the Sikh gurus fashion a new religion as is often claimed? In this excerpt from Ram Swarup’s work, we learn that Sikh teachings were rooted in Hindu scriptures. 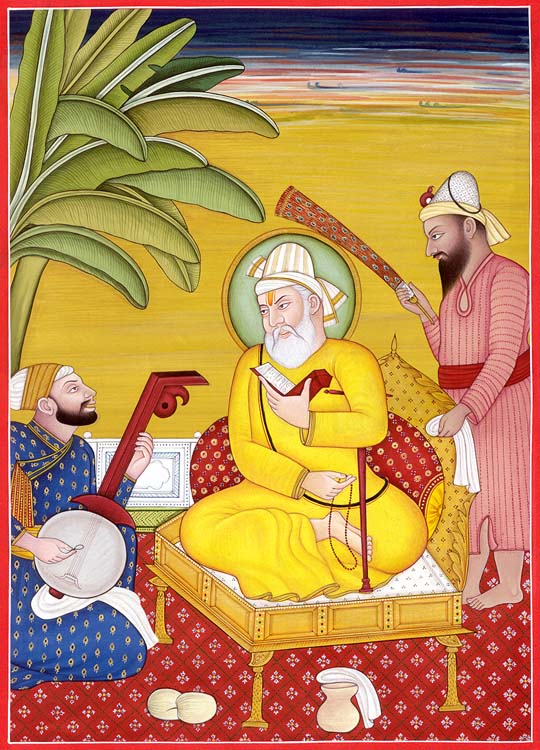 Any conscientious scholar of the Adi Granth will be struck by the fact that both in its origin and development, in its soul and body, it belongs to a larger literature of a similar nature and ethos found all over India. And the common source of them all is the Upanishads, the Yogas, the Puranas and the Mahabharata. All the spiritual categories, approach, message, motif, images, metaphors and illustrative material derive from that source, and only the language is regional. But nothing is lost in the repetition and the message remains fresh and invigorating; in fact, it acquires a new confirmation as it is renewed in the lives of Godmen from generation and region to region.

The Adi Granth reproduces hundreds of passages and phrases almost verbatim from the older scriptures. For Example, the passage of the Isa Upanisad, “It is far; It is near; It is within all this: It is outside all this”, is reproduced by Guru Nanak who says: “He is near; He himself is far; He himself is in the midst.” Similarly, the famous verses of the Katha and the Taittiriya Upanisads, “From fear of Him, the fire burns, from fear the Sun gives heat, from fear do Indra, Wind and Death spread along, finds voice in Guru Nanak: “In fear the wind blows … in fear Dharma Raj (Death) … in fear the Sun, in fear the moon” (Adi Granth, p. 464).

Again, the passage, “The sun shines not there, nor the moon, nor the stars, nor lightning,” quoted in several Upanishads, is repeated in Guru Nanak and found on page 1033 of the Adi Granth.

Even the Vedas are a living voice in the Adi Granth. The famous Hymn of creation of the Rig Veda, 10.129 finds expression in Guru Nanak’s Shabads without much modification. He says that “In the beginning there was indescribable darkness. There was neither earth nor heaven … neither day nor night…”

These similarities were not accidental caused by a “Hindu environment”, as some post-Macauliffe Akali scholars try to explain. They arose because the Sikh Gurus were Hindus; they were brought up and nourished on Hindu scriptures; they were shaped by the Santtradition of their day which derived from the Upanishads and the Yogas and Sikh Gurus were Vaishnavas who remembered their God by the name of Hari or Rama or Govinda.Nanak alone used the word “Hari’ 630 times; in the Adi Granth, it occurs 8,300 times. Similarly, the word ‘Rama’ appears 2,500 times. Whether one understands these names in their more popular and Pauranik sense or in their more Upanishadic and Yogic meaning, in either case there is no escape from the traditional identity.

Not only does the Adi Granth reproduce hundreds of passages from the older scriptures but like the rest of the Sant literature it also follows the lead of the Upanishads and the Gita and the Yoga Vasishtha in all doctrinal points. Its theology and cosmology, its God View and world-view, its conception of deity and man and his salvation, its ethics, philosophy and praxis and Yoga – all derive from that source. It believes in Brahma-Vada, in Advaita, in Soham, in Maya, in Karma and Rebirth, in Mukti and Nirvana, in the Middle Path (in its Yogic sense), in the Backward Journey and the Reversed Current, in death-in-life, the Tenth Gate and the Fourth State. It prescribes the path of action, devotion and knowledge.

The Sikh Gurus preach Advaita. “Is there any other? Thou alone, thou alone art existing,” says Nanak. He tells us: “Wherever I see, there He is diffused, there is union of Shiva and Shakti.” The third Guru says that “He is himself hidden. He is himself manifest.” It is the Vyakta and Avyakta of the Svetasvatara Upanishad, of the “manifest and yet hidden” (aavih samnihitam) of the Mundaka Upanisad, Similarly, the fifth Guru says; “That endless One is inside and outside: (Sukhmani).

Following the lead of the Upanishads and in line with the other Sant literature, one finds the refrain of “God within” in a thousand verses of the Adi Granth. The Words bhitari, and antari and andari, all meaning within, in the heart occur over 200 times in Nanak alone.

In the Upanishadic cosmology, man has his “roots above (Katha and the Gita) and he draws his sustenance from there. In Nanak too, man is uradha mula, and worship and devotion play the same role.

The Upanishads speak of two “companion birds” on the same tree (body), “of which the one eats the sweet fruit but the other looks on without eating.” The Adi Granth uses the same simile and says: “Two birds alight on a fruit tree … One enjoys the many-hued pleasures of the world, but the other remains absorbed in the World and attains Nirvana.”

This doctrine of Karma and Rebirth is common to all sects (expect Charvaka) that derive from the Sanatana Dharma. The concept abounds in the Adi Granth too. Guru Nanak alone uses the phrase “Janamu maranu” (birth and death), or “mari janamai” (dies and is reborn), or “aai Jaai” (come and go) over 500 times.

But beyond this lies another state, the state of Mukti or nirvana. This state has been described in many ways: in the language of freedom from the lower nature and also in the language of union with the Supreme Soul. Following the traditional simile, the Adi Granth describes it as a state in which “light becomes one with light” (jyoti jyoti samani). The fifth Guru speaks of the same state and the same path and says that the man “who falls in love with the True One does not die, nor having One come again.”

The Boy Who Recalled Dying in World War II. Exploratory Studies in Reincarnation.
Ramayana Parampara among the Garos and the Jaintias of Meghalaya
The Wonders of Hoysala Temples