This extract from M.Hirayanna’s classic work elaborates on the relation between reason and revelation as described in Indian philosophical traditions. 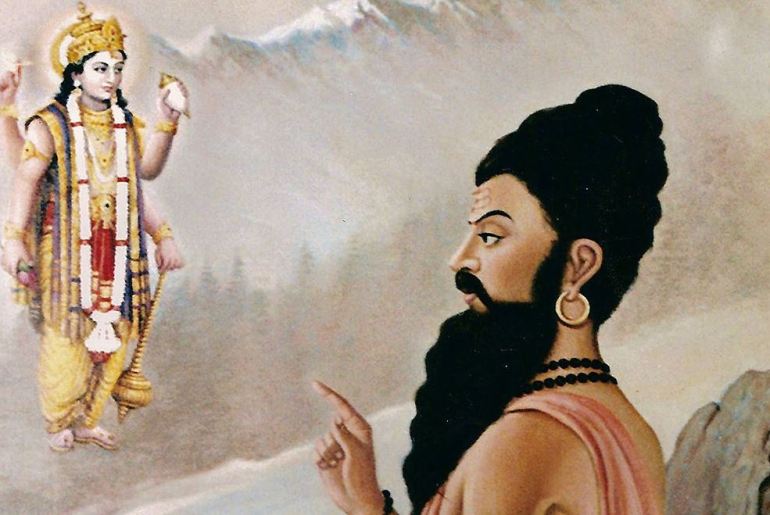 The word Pramana signifies the essential means of arriving at valid knowledge or prama. The object known is described as Prameya; and the knower, pramata. There is a great variety of views in regard to the nature and scope of pramanas; but it will do to refer now to only one or two general points about them. Broadly speaking, the pramanas are three – pratyaksa or perception, anumana or inference and Sabda or verbal testimony. The value of the first two of these as pramanas is recognized by all; but the same cannot be said of the third. Its inclusion under pramanas along with perception and inference is indeed peculiar to the Indian view and requires a word of explanation.

We should first distinguish here between two aspects of Sabda. When we hear a sentence uttered, there is a certain impression produced on our mind through the auditory channel. That is perception and what we apprehend then are sounds occurring in a certain order.

Sabda as a pramana does not, of course, mean this, which is rather a Prameya. There is another, the expressive or semantic aspect of it, and Sabda as we are now thinking of it is of this latter kind. Its utility in life as a means of acquiring knowledge cannot be exaggerated. Of the numerous facts which a person knows. It is only a small portion that he has observed or deduced for himself. For the rest, he has to depend entirely upon the testimony of others which comes to him through spoken or written words. But it may be questioned whether so much is sufficient to constitute it into an independent pramana; and we shall see as we proceed that some Indian thinkers denied to verbal testimony the logical status implied by classing it as a separate pramana.

That is, however, to understand Sabda in a sense wider than the one which belonged to it at first. In the beginning it stood only for tradition and its scope was extended in course of time so as to comprehend all verbal statements irrespective of their connection with ancient belief. We shall postpone the consideration of the pramana in this extended sense to later chapters and shall confine our remarks now to it regarded as merely a vehicle of tradition. The reason for including Sabda in this sense under Pramanas will become clear when we remember the vastness of the material of tradition that had accumulated by the time the pramanas came to be formally enunciated.

The main idea underlying the inclusion was that the contributions of history to philosophy should not be ignored. It also indicates the reverence with which the authority of tradition was regarded then. But it would be wrong to conclude that the exponents of the systems surrendered their judgements by indiscriminately admitting as valid whatever belief had come down from the past, even though it were taught in the Veda. Such a course was indeed impossible as matters stood at the time. There was, on the one hand, the whole of the complex teaching of the Veda handed down from the past; and there was, on the other, a mass of heterodox thought which as the result of free-thinking in different circles exhibited a good deal of diversity.

Philosophy as embodied in tradition was thus largely of a conflicting nature; and the need for testing the mutual compatibility of the elements constituting each creed was felt to be imperative. Both the orthodox and the heterodox accordingly set about examining their traditional beliefs, and tried to interpret them consistently.

The interpretation involves a great deal of independent reasoning; and it is the result of this reasoned inquiry that we have to understand by Sabda as originally conceived in Indian philosophy. The Pramana, therefore, signifies not tradition in general, but systematized tradition. It is such systematic interpretation of the teaching of the Veda that is, for example, the essential aim of the Mimamsa system.

Though both sets of thinkers admit tradition as a source of philosophic knowledge, there is an important difference between the ways in which it is conceived by them. For the heterodox, this tradition at no stage goes beyond human (Paurusheya) experience, including in that expression what can be known not only through perception and reasoning but also through a higher faculty- no matter what name we give it, insight or intuition.

In this sense the value of tradition lies in its communicating to us not what is humanly unascertainable, but only what is not knowable through mere reason and perception. In other words, tradition stands for truths that are beyond the reach of common men, but have been directly perceived by those that were possessed of spiritual vision. For the orthodox, on the other hand, it means revelation which; if not exactly divine or coming from God, is, as we shall see, supernatural (Apaurusheya) in some sense or other. The significance of the distinction is that while for the one school the realm of human experience understood in its widest sense exhausts Reality, for the other it does not. Human experience may be sufficient to understand nature; but nature, the latter contend, transcends itself and points to something beyond, and they postulate Sruti or revelation as the sole means of acquiring what knowledge is possible of that transcendental sphere of being. According to the former no such region at all exists; and to place anything beyond the reach of human powers is the same as denying reality to it. The question what Sabda or tradition represents in the two schools thus resolves itself eventually into one of general philosophic outlook and connotes a fundamental difference between them in the conception of Reality.

The acceptance of Sruti as an authority in this sense, it will be seen, has its danger, for it may lead to belief in anything under the plea that it has been revealed. The ancient Indian realized the danger and has hedged in his view of it by various conditions. They show what exactly revelation, as conceived in orthodox circles, is, and how it stands related to experience in general and to reason in particular:

(i) The first of these conditions is that the revealed truth should be new or extra-empirical (Alaukika), i.e. otherwise unattained and unattainable. The authority of revelation for instance is not to be invoked to show that heat destroys cold, which is a matter of common experience.

Now it is clear that revelation should speak to us in terms of our experience, for otherwise it will be unintelligible and will therefore fail of its purpose. Even the scripture cannot teach the unknown through the unknown, so that the theme of revelation cannot be wholly out of relation to human experience. When we take the condition of novelty along with this fact that the terms in which transcendental truth is communicated must necessarily be known to us, we see that what is revealed, so far at least as philosophic truth is concerned, cannot be altogether new, but can only be a new way of construing our experience.

(ii) The next condition is that what is revealed should not be contradicted (abadhita) by any of the other pramanas.Nor should one part of it be in conflict with another. This means that the content of revelation must be internally coherent and that, though it may be above reason, it cannot be against it. The very fact that conditions are laid down for determining the validity of revelation makes it evident that it cannot be opposed to reason.

(iii) It is not only thus negatively that revelation is related to reason. The relation is also positive in that we find a third condition laid down, viz. that reason should foreshadow what revelation teaches. That is, revealed truth must appear probable. If this condition again is not to clash with the first one of novelty, we must take it as meaning only a rough forecast of the truth under consideration by means of analogies drawn from the empirical sphere. They are not proofs of revealed truth; yet they are not useless, since they serve to remove any ‘antecedent improbability’ that may be felt to exist about the truth in question. The appeal to reason which we come across often in the Sruti – particularly in the Upanisads – is explained by the orthodox as really of this kind. In their view, reason by itself is incapable of discerning such truths. At best, it may lead to two or more conclusions equally plausible; and, without the aid of revelation, it is impossible to avoid skepticism. The survival of the self after death is a good instance of a truth taught in the Veda which satisfies these conditions. It is not accessible to reason; but at the same time there is nothing in it to contradict reason. Despite these careful reservations, it should be admitted, Sruti so defined remains an external authority; and that is the view taken of it in the orthodox schools.

Mysore Hiriyanna (1871–1950) was an eminent Indian philosopher, Sanskrit scholar and authority on Indian aesthetics. He was a Professor of Sanskrit at the University of Mysore and a contemporary of Sarvepalli Radhakrishnan. His classes on Indian Philosophy were comprehensive. His classroom dictations, published by Allen & Unwin in book form as "Outlines of Indian Philosophy" brought Hiriyanna international recognition.