Madrassas are just claimed to Islamic religious schools. And in a country which goes by ‘sarva-dharma-samabhava’ they are thought to be harmless schools where love and peace is taught. But Khalid Umar in this brief article tells us the true purpose of Madrassas, which is to churn out terrorists. 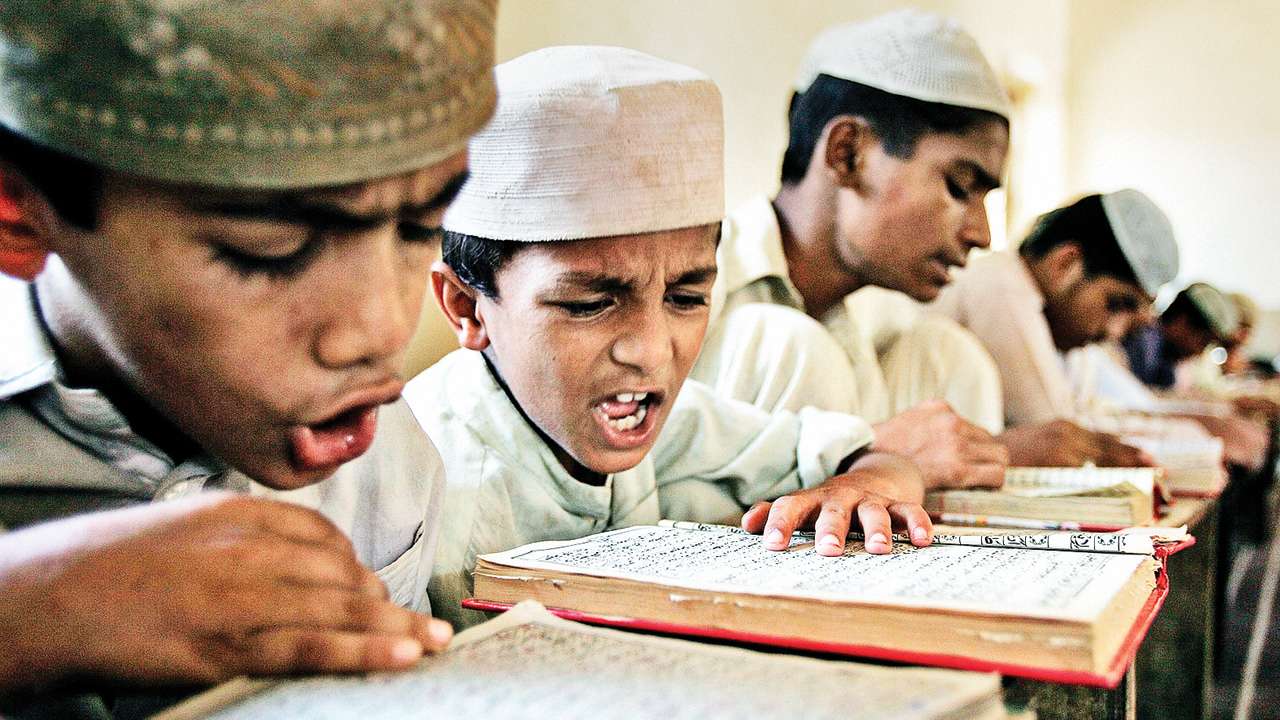 Before the Uniform Civil Code, India needs a Uniform Education Code. One secular curriculum for all.  When there be 3,60,000 young minds stuck in the curriculum developed in the 1700s in 3,000 madrassas in the Indian capital alone you can’t dream to take the nation ahead with millions enrolled in the 600,000 madrassa countrywide with additionally 40-50 lac mosques with attached makatab or madrasa.

What is Taught in the Madrassas?

A madrasa is an exclusivist religious school, where Muslim children are taught Quran, the Sharia, Hadith, Islamic history of invasions (Jihad). The institution of Islamic madrasas in India is as old as the history of Islam in India, say 1000 years. The syllabus teaches the students to hate all non-Muslims, especially the Hindus who being idolaters are dubbed as hateful  human beings, called ‘kaffirs’. Ghana-i-Hind (the goal of establishment of Islamic rule across India through Jihad) is also taught in almost every madrassa, both in India and Pakistan. Madrasahs produce indoctrinated minds, full of hate, fear and false pride.

This derelict institution can’t be reformed. Outright scrap page is the solution. Helping them is writing your own obituary.

The UPA Government initiated an ill thought plan. A “Scheme for Providing Quality Education in Madrasas” (SPQEM in 2009-10 to encourage Madarsas and Maktabs to introduce formal subjects i.e. Science, Mathematics, Social Studies, Hindi and English; The scheme is STILL ongoing in 18 states in the country. So far under SPQEM, over 21,000 Madarsas spread over different states have been given Rs. 1138 crores. Only in the Uttar Pradesh there are 18,27,566 children in 8584 Madrasas, as per GOI figures.

That is mindless stupidity.

Core Islamic scripture as taught can’t be made secular and humanistic. This scheme initiated by Congress is a sheer loss of time and exchequer and it must be scrapped forthwith.

Why Madrassas can’t be Reformed?

Islamic Teachings and modern education can’t coexist. Would the students of madrassa will trust Science which says Earth is spherical and revolves around the Sun or will believe Quran which say, earth is flat and the Sun sets in murky water of a lake? How can you teach them harmony and love when they learn from Quran that all idolators are consigned to the eternal hell fire?

What Should India Do?

1- All madrassas must be nationalised, registered and the state should have the writ to appoint teachers, administrators and curriculum there. Their financials & source of income need to be scrutinised. All the madrassa be converted into modern schools open to all the communities. Community exclusive, organised & institutionalised religious education must be scrapped for any religion. ALL children must be taught uniform curriculum.

2- All the mosques must be monitored through CCTV recording to check what it being taught and fed. It is not a coincidence that every riot in Indian cities start on Friday after Juma prayers. If China and Egypt can control mosques, why can’t India, the second largest Muslim population country?

If we don’t control mullah, mosque and madrassa, peace and communal harmony in India will remain a pipe dream.

Kaffirs within Kaffirs: The Devolution of Islamic Society
Jizyah: The Tax of being Non-Muslim
The Foundation of Islam