Life evolves, enriching Earth to make up Nature, and why we must maintain eternal obligation towards Earth and Nature. What plays out in this interaction of the living and non-living was the merging of the amazing cycles of living and non-living components of Nature, as cycles of Living Nature got aligned with the preexisting pre-Life cycles of Earth. In this article, we shall discover these amazingly beautiful cycles, periodicities and rhythms of Earth and Nature (which Vaidiks normatively call ṚTA). We shall also study habitats and biodiversity.

Prior to living Nature: the “pre-Life” cycles of Earth and frequencies and rhythms of the Universe:

1. The cycles of geo-astronomic phenomena (eg. Earth warming and cooling, oceans advancing and retreating, Milankovitch cycles of the earth’s axial wobble, day and night cycles, etc); It is this cycle which Hindus call the Ayan movement; it is this reason why a paradise becomes the Sahara desert; and why pole stars change.

2. On a broader geological time-scale, the coming together and separation of continental landmasses or Geological plates (Continental Drift). Supercontinents have assembled and dispersed multiple times in the geologic past (the last being the Supercontinent of Pangaea…); in the future, who knows, how they may rearrange differently again!

3. Subtle periodicities which always existed (aspects of Truth or Ṛta) but were perceived only after Life evolved and humans arrived: numbers in mathematics, musical octave scales, cymatics, geometry, etc.

The cycles of the non-living components of Nature:

1. Annual climate cycles, or the seasons, with the spectrum of severities becoming our weather;

2. The cycles of chemical elements (carbon, nitrogen, phosphorus, oxygen, calcium, indeed of every element of the Periodic Table);
The cycle of water (the hydrological cycle), including the largest component of this cycle, namely the rain cycle of rain;

3. Cycles of ocean currents, wind currents, etc. with a pattern and framework of appearance…

The living species have their own cycles… some examples…

1. Life cycles: All species of plants, microorganisms and animals have life cycles; these include the oestrus cycles of the females of species and cycles like the rut or musth in males; the flowering / seeding cycles of plant life; sporulation and re-germination of spores of microorganisms; etc.

2. Animal migration cycles: Animals are born to move, unlike plants meant to stay in one place. Since animals are by definition species which must always move, they have migratory paths, in air, in oceans, in rivers and on land. Singly or in groups, animals do move to the same places every few months or year or over years. While all wild animal movement is not with circles or with exact return spots, there are definite periodic returns of some species of animals to the same point over a span of some seasons or even years, to avail of food and water across seasons over vast expanses of time, and this survival skill and knowledge is passed down generation to generation; this longer-span movement, which has been going on for millennia, also qualifies for becoming a ‘cycle’ in Life. Without these animal movements, Nature would come to a fatal standstill. Eg:

(i) The Great African Migration, back and forth across dangerous river crossings every year but in different seasons, in pursuit of sweet water and green grass, and to give future to their next generations born and to be born, by tides of tens of lakhs of prey species herbivores in huge herds, is a spectacle going on for thousands of years. The most numerous species is the Wildebeest – a large antelope. It is the largest animal migration on the planet, central to Africa’s biodiversity and hence, human survival on the overpopulated, impoverished and hungry continent.

(ii) ‘Cyclic’ elephant corridors both in Africa and Asia are used by the same herd comprising different generations of elephants year after year. Elephants have to move else they will exhaust their food at one spot. Both (i) and (ii) ensure rotation of grazing allowing grass to regenerate, and incorporates the life cycles of both herbivore and grass / forage species, and birth cycles of predators; this is vital to keep the grasslands and forests viable and healthy.

(iii) Tiger corridors in Asia are used by generations of tigers rather than just one individual, but are vast pathways interconnecting different wildernesses, but with each point being visited by tigers over generations. This churns the gene pools creating genetic diversity and prevents inbreeding, much like avoiding intra-gotra marriage fixing in humans. Central India, the land giving birth to the mighty Narmada, Tapi-Poorna, Mahanadi rivers and the tributaries of the Ganga-Yamuna system or the Godawari southwards, have the most diverse population of tigers, and these forests have preserved tiger, river and tribal. Here is a map of the cycles of tiger corridors, the life veins of our Madhya Bharat:
This ensures survival of the tiger species, which then commands the forest capacity to give birth to perennial rivers, on which downstream human life depends.

(iv) Salmon fish return as adults to spawn exactly where they were initially laid as eggs, making their migration cycle also their life cycle. North America and Europe are witness to this return of salmon each year, which brings seawater nutrients to upstream inland forests. Without salmon, there would a collapse, one by one, of bears, trees and eventually herbivores. These ancient cycles are Ṛta ऋतम्.

(v) Migratory birds fly back and forth – across the Himalayas, from North to South Pole, every year.

3. Cycles of animal activity: Cycles of hibernation or aestivation; generating and shedding of antlers in deer, coat moults in Arctic foxes or skin moults in snakes.

4. Physiological cycles: Cycles of filling and emptying of the heart, lungs, bladder and bowels of animals; Kreb’s cycle and other physio-biochemical cycles inside cells; etc.
The Pranayamic cycle of anuloma and viloma and the circuits of the yogic kundalini nadi pathways are also part of this.

5. Cycles of plant life: leaf generation, yellowing and shedding of leaves of trees (in sync with seasons); crop cycles (in accordance with seasonal cycles); opening and closing of plant leaf pores;

LETTING NATURE BE: WILDERNESSES AND BIODIVERSITY:

Where Nature has not been interfered with by human presence, Nature is raw, magnificent and dynamic. Wildernessesare tracts of Earth with Life as raw untamed Nature, even without human presence and can survive without humans. Wildernesses (Raw Nature landscapes) function perform various ecological functions (as they did before human evolution) where Nature, Life, Earth continue their cycles amidst biodiversity. In technical terms they are called habitats, and in Sanskrut, “अधिवास” and are classified into ecosystems or “परिसंस्था”.

Why some nature tracts must remain raw: since ‘wildernesses’ who keep us alive:

Wildernesses are landscapes not just free of human interference but where humans and economics are entirely dispensable; after our arrival, wildernesses are selectively really wild components of what all we all share as the “Commons”; we cannot exist without them. To explain human dependence upon nature in banking capitalist terminology, a tract of raw untamed nature is the fixed deposit of natural capital, whose interest alone keeps us alive, as circulation revenue, and whose corpus we must not touch.

Biodiversity is the diversity of living forms, be it ecosystem or habitat diversity, the diversity of species and subspecies (which are dynamically adapting and evolving) and within each subspecies, genetic diversity. Biodiversity makes up life, and each component contributes ecologically to circulation of energy and nutrients, and propagation. This allows Nature to carry out its cycles. While an apex predator species controls the dynamic equilibrium in the food pyramid, other iconic species of plants, microbes and animals make up our stunning biodiversity.

Energy and nutrient circulation within biodiversity: The food pyramid:

Shown here is the African savanna: grasses and legumes capture energy through photosynthesis; herbivores like the zebra graze plant energy into their flesh; majestic African lions consume the herbivores; that much less grass is grazed. This spares the grass allowing grass regrowth. Upon death, nutrients return to the soil and atmosphere, and sought back by plants to start the cycle again.
Similar food-ways exist in all ecosystems. Each species is the food of other life forms; Hindus have known this as “जीवो जीवस्य जीवनम्”… Even if the human isn’t hunted as a primary food prey species, umans are eaten by certain predators; and, a dead human body is food for the decomposer microbes (in graves) or vultures (Tibetan sky burials and Zoroastrian towers of silence).

Role of apex predators in biodiversity:

Prior to colonization, the pagan ancients, including the Hindu civilization, knew that Nature is about cycles and not about mere straight lines. Straight lines are the timeline of the Abrahamic-Religious trajectory of history-centric “Founded Religions” or its Secularised  version, expecting infinite Growth. Since Nature = Earth + Life, these cycles have to go on. Branches of Agroecology (as a modern emerging multi-disciplinary discipline) such as Permaculture understand this out of rediscovery, and from the adhyayan of hitherto uncolonised cultures.
Hindus have respect for the wheel, be it the Sudarshan Chakra of Bhagwan Vishnu, the Shree Chakra of Devi Maa or the Buddhist Dhamma wheel.

Biodiversity has to stay. Mother Earth can survive without us, but Mother Nature includes us, and our actions can make Nature perish, with destruction of our biodiversity and interference with these cycles. The Saundarya that Aadi Shankaraacharya spoke about is inspired by the stunning diversity on Mother Nature. Biodiversity matches the mind of polytheist cultures which respects diversity; an array of divinities, a pantheon represents diversity, as is found in Nature. [In contrast, Abrahamic monotheists create monocultures of the mind which in turn result in mental deserts, projected as desertification, aridification and climate crisis.]

Nature is not prosaic but a mosaic with interconnections.

Ṛta ऋत and Ṛna ऋण : Thus, these cycles and these pristine beautiful landscapes of Nature’s wildernesses are what define Nature, are Life and make up the sum and substance of wisdom of Life and living. This alone is ऋत (rta).

Inadequacy of the Intellect - Wisdom of the Upanishads
The Fifth Veda
Is Religion opposed to Science? A Vedic Perspective 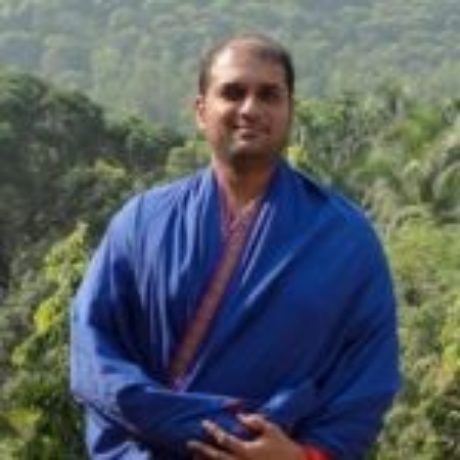 Dr. Aditya S. Dhopatkar is a Hindu thinker from Mumbai, with Indic history, decolonisation, national integration and eco-agro-conservation as his fields of interest. He is a veterinarian and agroecologist. He has authored articles on Gau Kaarya, on Islamic persecution of Jains, on North East India, on Swadeshi martial arts and on sacred geography. He works towards blending of Indian decolonisation with sacred Hindu agroecology, covering everything from Desi Gau to tiger / wildlife conservation. His intellectual inspirations range from Veda and Jaina to Adi Shankara, Chanakya and Deval Rishi of the classical period, from Rajput heroes and Vijayanagara to Samartha Ramdas Swami and Shivaji / Bajirao of the medieval period, from Tilak to Veer Savarkar / revolutionary freedom fighters and Hedgewar in the colonial period, and from Swami Chinmayananda, Sita Ram Goel, Ram Swarup, Koenraad Elst to Dr. Vandana Shiva in the modern period.