It is true that there is no doctrinal animosity between Sikhism and Hinduism. But the Hindus cannot extend unilateral peace to any group without getting respect and peace in return. According to Shri Ram Swarup, when the Hindus tell the Sikhs “You have been our defenders”, it earns contempt in the present psychology because self-despisement and inferiority complex is the surest way of losing a friend or even a brother. It also gives the Sikhs an exaggerated sense of self-assessment. 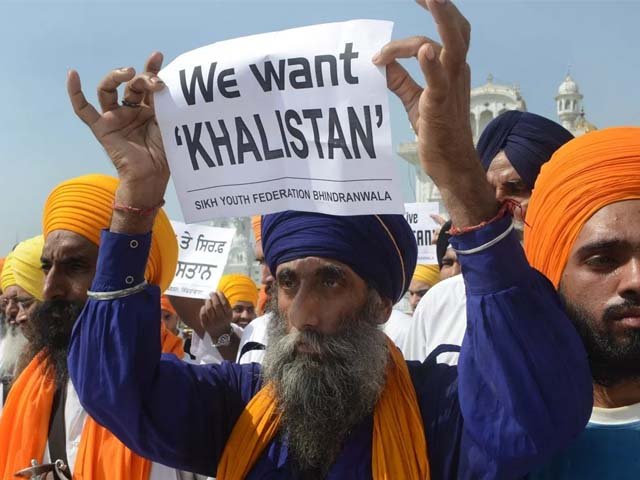 Sikhs have always been honoured members of the Hindu society. The difference between Hindus and Sikhs has always been functional and never fundamental. But various secessionist and divisive forces have continuously tried to fuel the flames of Sikh separatism much before independence and their relentless efforts have started to bear fruits especially in the post-independence period. This article is an attempt to take a look at the elements that sowed the seeds of Sikh separatism and the various factors responsible for nurturing and nourishing it.

The British adopted the “Divide and rule” policy as they realized that their military power was insufficient to establish their rule in India. So they tried to create pockets of solid support for their regime and the Muslims were their favorites. One such pocket was provided by the Sikhs. They gave Sikhs the “minority status” like the Muslims and Christians and tried to separate Sikhs from the parent Hindu society by pronouncing Sikhism as a departure from Hinduism, just like Christianity from Judaism. Thus, it became easier for some Sikh theologians and scholars to proclaim that Sikhism was closer to the Abrahamic faiths than Hinduism. Some of the British even projected Sikhism as a sect of Islam.

These manipulative attempts resulted in subversion of Sikhism in the mould of monotheism and drawing a false equivalence with the Abrahamic faiths by equating the Adi Granth with the Koran and the Bible and the Sikh Gurus with prophets along with espousing of contempt for idolatry. The British said that Hinduism posed a danger to Sikhism and hence, the external marks of difference must be preserved at all costs. Sikhs who considered them as Hindus were fooled into believing that their behaviour was in direct opposition to the teachings of their Gurus. Many books were written and literature published which propounded this narrative. No wonder, Sikhism gradually started showing the same fanaticism and bigotry as Islam and Christianity. This scholarship had a silent, subtle and long-range influence which took some time to be propagated and served as the inspiration of subsequent Sikh intellectuals.

But the British government did not neglect the quicker administrative and political measures either. It developed a special Army policy which gave immediate results. The British had conquered Punjab with the help of Poorabiya soldiers. Many of them were Brahmins who turned rebellious in 1857. So the Sikhs were chosen in their place. In 1855, there were only 1500 Sikh soldiers but by 1910, the numbers had increased steeply and Sikhs constituted almost one-fifth of the total army strength. This was done to give them a sense of exclusiveness and they were encouraged to regard themselves as a totally distinct and separate nation. The British even congratulated themselves for preserving Sikhism as a separate religion.

Political organizations like Singh Sabhas and Chief Khalsa Diwan were established to provide political leadership to Sikhs while remaining loyal to the British. They spearheaded the movement of de-Hinduization of Sikhs and demanded recognition as a separate community. Earlier, Brahmins were working as priests and presiding over Sikh ceremonies. But they were expelled and a demand for separate rituals was made. In spite of all these efforts, only a small section of Sikhs believed that there was a distinct line of cleavage between Sikhism and Hinduism.

In the post-independence period, this movement saw greater success as the divisive forces which had laid low for some time reappeared. Minorities were encouraged to feel insecure and aggrieved. The minority stick came very handy in beating the majority Hindu community into shame. The works of the British which de-Hinduized the Sikhs were republished in the 1960s. The success of the Green revolution and various other factors ensured that the Sikhs became rich and prosperous. They no longer found the Hindu bond good enough for them and started seeking a new identity which was readily available to them in their names and outer symbols.

According to Shri Ram Swarup, when the Hindus tell the Sikhs “You have been our defenders”, it earns contempt in the present psychology because self-despisement and inferiority complex is the surest way of losing a friend or even a brother. It also gives the Sikhs an exaggerated sense of self-assessment. Also, the Islamic imperialists and Christian missionaries are looking at the Sikhs hopefully for support in order to mount a combined attack on Hindu society at present. This was also evident during the recent anti-CAA protests when some Sikhs fed langars to the jihadis of Shaheen Bagh and even opposed the implementation of CAA.

Inspite of many recent provocations, lapse and misunderstandings, Hindus and Sikhs have shown that they are one in blood, history, aspiration and interest. This age-old unity has proved to be the most solid support. But considering the separatist and divisive forces at work, this unity should not be taken for granted. It should be cherished, cultivated and re-emphasised.

In the words of Shri Ram Swarup, “We can grow great together; in separation, we can only hurt each other.”

Indra - The Supreme Deity of Rig Veda
What India can learn from France’s fight with Islamic terrorism?
Psychology of Jesus