Building upon the data and the tables that were discussed in the previous article, this article discusses the state of education as it was in Madras Presidency when the British started ruling it. 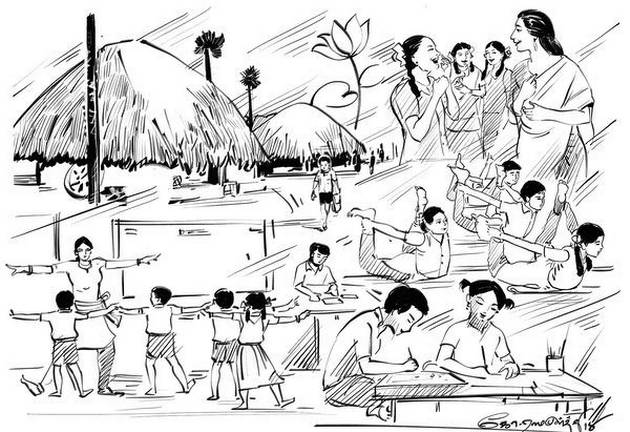 Similar views have generally been expressed by various British administrators and observers and this has become a generally accepted scholarly view that can be found in any history of Indian education.  For instance, one could cite the following statement on the state of indigenous education in early nineteenth century from the classic textbook by J.P. Naik and S. Nurullah:

The society itself had little use for a formal system of education.  Priestly classes who formed a very small minority needed formal institutions for religious instruction…  The small class of government servants, merchants, money-lenders and the more well-to-do landlords also did need some elementary education in three R’s[1] and they organized for themselves the institutions needed for the purpose.  The bulk of the population, however, never went to formal educational institutions.  (Naik and Nurullah 1974:1-2)

It thus appears that even the best of our scholars seem to have followed the opinions of the British administrators and scholars uncritically.

The data of the Madras Survey of 1822-25 as summarised in Table I, presents a completely different picture as regards the participation of various communities in the indigenous education system.  It shows that all the sections of the society were being instructed in these schools; in fact, the majority of the students in most of the districts were from the so called non-dvija[2] communities. As Table I shows, the non-dvija Hindus comprising of Sudras and the ‘Other Castes’ constituted about 65% or nearly two-thirds of all the students studying in the schools.  While the non-dvijas constituted only 39% of the total students in the Telugu-speaking districts, their percentage was much higher at 54% in the Malayalam-speaking Malabar, 64% in the Oriya-speaking Ganjam, and 74% in the Kannada-speaking Bellary and Srirangapattanam; in the Tamil-speaking districts, the non-dvija students, indeed constituted an overwhelming majority of 77% of the total student population.[3]

This important feature of the 1822-25 survey data on the community profile of boys undergoing instruction in the indigenous school system has been highlighted by Dharampal in his pioneering study:

It has generally been assumed that the education of any kind in India, whether in the ancient period, or just at the beginning of British rule, was mainly concerned with the higher and middle strata of society; and, in case of the Hindoos (who in the Madras Presidency accounted for over 95% of the whole population), it was more or less limited to the twice-born. However, … the data of 1822-25 indicate more or less an opposite position. Such an opposite view is the most pronounced in the Tamil-speaking areas where the twice-born ranged between 13% in South Arcot to some 23% in Madras, the Muslims from less than 3% in South Arcot and Chingleput to 10% in Salem, while the Soodras and the other castes ranged from about 70% in Salem and Tinnevelly to over 84% in South Arcot….

In Malayalam-speaking Malabar, the proportion of the twice-born was still below 20% of the total, but because of a larger Muslim population the number of Muslim school students went up to nearly 27%, while the Soodras, and the other castes accounted for some 54% of the school going students.

In the largely Kannada-speaking Bellary, the proportion of the twice-born (the Brahmins and the Vysees) went up to 33%, while the Soodras, and the other castes still accounted for some 63%.

The position in the Oriya-speaking Ganjam was similar, the twice-born accounting for some 35.6%, and the Soodras and other castes being around 63.5%.

It is also important to take note of the community profile of the students who were studying at home as given in Table II.  As was noted earlier, this information is available only for the Madras district, and the number of boys who were reported to be studying at home (26,446) was nearly five times the number of those studying in the indigenous schools (5,523).  It is interesting to see that of the 26,446 boys who were being instructed at home, a substantial number viz., 7,589 (about 27%) belonged to the Sudra community, and 3,449 (about 13%) belonged to the ‘Other Castes’ (or what are today classed as the Scheduled Castes and Scheduled Tribes). Thus under the indigenous education system, what may perhaps thought of to be a privilege of being instructed at home was as much enjoyed by the Sudras and the ‘Other Castes’ as by the dvijas.[4]

[1] The three R’s refer to the basic curriculum consisting of reading, writing and arithmetic at the primary school level.

[2] The Sanskrit word dvija refers to the twice-born, and it has traditionally been associated with those belonging to the Brahmana, Kshatriya and Vaisya communities.

[3] Since the reports of the collectors do not mention the total population of each community in the districts of the Presidency, it is not possible to estimate, community-wise, the percentage of boys of school-going age who were undergoing instruction in the districts of Madras Presidency.  An approximate estimate of the community profile of the population of the Presidency can be worked out on the basis of the enumeration reported in the first detailed Census of the Presidency conducted in 1871.  Based on this, detailed estimates can also be worked out regarding the percentage of boys of school-going age of different communities, who are undergoing instruction in the indigenous schools in various districts in ca.1825.