Contrary to what people believe in a survey in Madras Presidency during 1822-55 it was found that there were 11,575 schools in the Madras Presidency with 1,57,195 students studying in them; the reports of the collectors of various districts also noted that there were in all 1,094 ‘colleges’ or centres of higher learning with 5,431 students studying in them. An important feature that emerged from the survey data was the wide-spread extent of the indigenous system of education, as evidenced by the number of boys who were undergoing instruction. 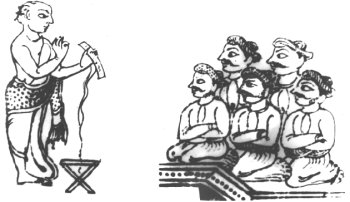 Surveys of Indigenous Education in Madras Presidency during 1822-25

Our present essay is concerned with the analysis of the detailed information on indigenous education compiled in the course of the survey carried out in the Presidency of Madras during 1822-25.  While initiating the survey, Governor Sir Thomas Munro in his minute of 25 June 1822 acknowledged that the British Government had done little till then in support of the education of the masses; he also acknowledged that the British administration knew very little about the state of the indigenous education system that prevailed in the country:

Much has been written both in England and in this country about the ignorance of the people of India and the means of disseminating knowledge among them.  But the opinions upon this subject are the mere conjectures of individuals unsupported by any authentic documents and differing so widely from each other as to be entitled to very little attention.  Our power in this country and the nature of its own municipal institutions have certainly rendered it practicable to collect material from which a judgment might be formed of the state of the mental cultivation of the people.  We have made geographical and agricultural surveys of our provinces. We have investigated their resources and endeavoured to ascertain their population, but little or nothing has been done to learn the state of education.  We have no record to show the actual state of education throughout the country. [1] (Dharampal 1983:83)

At the conclusion of the survey, it was found that there were 11,575 schools in the Madras Presidency with 1,57,195 students [2] studying in them; the reports of the collectors of  various districts also noted that there were in all 1,094 ‘colleges’ or centres of higher learning with 5,431 students studying in them.  An important feature that emerged from the survey data was the wide-spread extent of the indigenous system of education, as evidenced by the number of boys who were undergoing instruction.  This was highlighted by Munro while reviewing the information collected in the survey, in his minute of 10 March 1826:

The Board of Revenue were directed by government, on the 2nd July 1822, to ascertain the number of schools, and the state of education among the natives in the provinces, and with their letter of the 21st February last, they transmitted the reports on this subject which they had received from the several collectors.  From these reports it appears that the number of schools, and of what are called colleges, in the territories under this presidency, amount to 12,498, and the population to 12,850,941; so that there is one school to every 1,000 of the population; but as only a very few females are taught in schools, we may reckon one school to every 500 of the population.

2. It is remarked by the Board of Revenue, that of a population of 12½ millions, there are only 188,000, [3] or 1 in 67 receiving education.  This is true of the whole population, but not as regards the male part of it, of which the proportion educated is much greater than is here estimated: for if we take the whole population as stated in the report at 12,850,000, and deduct one half for females, the remaining male population will be 6,425,000; and if we reckon the male population between the ages of five and ten years, which is the period which boys in general remain at school, at one-ninth, it will give 713,000, which is the number of boys that would be at school if all the males above ten years of age were educated; but the number actually attending the schools is only 184,110, or little more than one-fourth of that number.  I have taken the interval between five and ten years of age as the term of education, because, though many boys continue at school till twelve or fourteen, many leave it under ten.  I am, however, inclined to estimate the portion of the male population who receive school education to be nearer to one-third than one-fourth of the whole, because we have no returns from the provinces of the numbers taught at home.  In Madras that number taught at home is 26,963, or about five times greater than that taught in the schools.  There is probably some error in this number, and though the number privately taught in the provinces does certainly not approach this rate, it is no doubt considerable, because the practice of boys being taught at home by their relations or private teachers is not infrequent in any part of the country.  The proportion educated is very different in different classes; in some it is nearly the whole; in others it is hardly one-tenth.

3. The state of education here exhibited, low as it is compared with that of our own country, is higher than it was in most European countries at no very distant period.  It has, no doubt been better in earlier times; but for the last century it does not appear to have undergone any other change than what arose from the number of schools diminishing in one place and increasing in another, in consequence of the shifting of the population, from war and other causes. [4] (Dharampal 1983:248-249)

Based on the aggregate data of the survey, Munro highlights the fact that there was a school for roughly every 500 males.  By estimating the number of boys in the school-going age-group of 5-10 years to be 1/18th of the total population, Munro concludes that “a little more than one-fourth” (Dharampal 1983:248) of the boys of school-going age were undergoing instruction in these indigenous schools.