In this article, Probal Roy Chowdhury introduces the idea of The Beautiful Tree which was used as a metaphor for Indian education system by Gandhi and then picked up by Shri Dharampal. 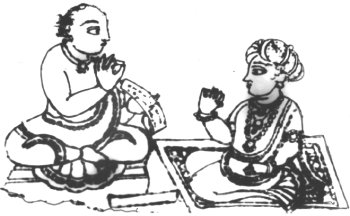 By the early decades of the nineteenth century, the British Government in London was well aware that a widespread system of indigenous education still prevailed in large parts of India.  For instance, the Public Dispatch from London to Bengal Presidency, dated 3 June 1814, observed:

“We refer with particular satisfaction upon this occasion to that distinguished feature of internal polity which prevails in some parts of India, and by which the instruction of the people is provided for by a certain charge upon the produce of the soil, and other endowments in favour of the village teachers, who are thereby rendered public servants of the community.” (Howell 1872:6; Dharampal 1983:67fn.)

This brief allusion to the indigenous education system does encapsulate several features of the internal arrangements of the Indian polity that had been taken note of by various British officials in India and their masters in London: that a portion of the agricultural produce, which was the mainstay of Indian economy, was ear-marked by the village community for public spending on services like education.  The despatch also mentions that there were other endowments too, which in South India were in the form of maniyams or assignments of the revenue due to the Government from an agricultural land.  It is also notable that the dispatch refers to teachers significantly as ‘public servants’.

The dispatch of 1814 was based upon the observations of various British officials who had served in India for long.  For instance, there is the evidence of Thomas Munro before a House of Commons committee, which refers to the fact that there were schools established in every village which imparted essential primary education to the children:

“If a good system of agriculture, unrivalled manufacturing skill, a capacity to produce whatever can contribute to convenience or luxury; schools established in every village, for teaching reading, writing, and arithmetic; the general practice of hospitality and charity among each other; and above all a treatment of the female sex, full of confidence, respect and delicacy, are among the signs which denote a civilised people, then the Hindus are not inferior to the nations of Europe; and if civilisation is to become an article of trade between the two countries, I am convinced that this country [England] will gain by the import cargo. [1] (Hansard Vol.XXV 1813:786)”

The fact that there was a widespread indigenous system of education, amounting to almost a school per every village, was noted in other parts of India also.  For instance, G.L. Prendergast, a member of the Governor’s Council in Bombay Presidency, recorded the following in a minute of 27 June 1821:

“I need hardly mention what every member of the Board knows as well as I do, that there is hardly a village, great or small, throughout our territories, in which there is not at least one school, and in larger villages more; many in every town, and in large cities in every division; where young natives are taught reading, writing and arithmetic, upon a system so economical, from a handful or two of grain, to perhaps a rupee per month to the school master, according to the ability of the parents, and at the same time so simple and effectual, that there is hardly a cultivator or petty dealer who is not competent to keep his own accounts with a degree of accuracy, in my opinion, beyond what we meet with amongst the lower orders in our own country; whilst the more splendid dealers and bankers keep their books with a degree of ease, conciseness, and clearness I rather think fully equal to those of any British merchant.  (HCP 1831, Vol.IX:468; Dharampal 1983:58)”

Surveys of Indigenous Education in India during Early Nineteenth Century

During the decade of 1820-30, following instructions from authorities in London, various provincial governments in India carried out detailed surveys of the indigenous education system prevalent in their provinces.  The survey in Madras Presidency, which was perhaps the most detailed, was conducted during 1822-25.

A survey in some selected districts of the Bombay Presidency was first conducted during 1824-25, followed by another similar survey in 1828-29. [2]  In 1835, on instruction from the Governor-General William Bentinck, William Adam, a missionary of the Unitary Church, conducted a survey of indigenous education in five districts of the Bengal Presidency: Birbhum, Burdwan, South Bihar, Tirhut and parts of Murshidabad.  Adam also personally carried out a detailed statistical survey of the area under the Thana of Natore in the district of Rajshahi (presently in Bangladesh).

In this first part of a series of articles, Dr. Probal Roy Chowdhury discusses the state of indigenous education in India before the British destroyed the system. He is quoting various surveys that were done in the colonial times to put the reality in perspective.

Did Schools Charge Fee in 19th Century?
The Romantic Idea of Education
Will Corona Virus cure our Colonial Hangover?