When the urge for unity is spiritual, the theology of One God is no bar and the seeker reaches a position no different from Advaita, from ekam sat. He realizes that God alone is, and not that there is only One God. But if the motive for unity is merely intellectual, it helps little, spiritually speaking. God remains an outward being and does not become the truth of the Spirit. It does not even help to reduce the number of Gods; instead it multiplies the number of Devils – if Christianity is any guide in the matter. 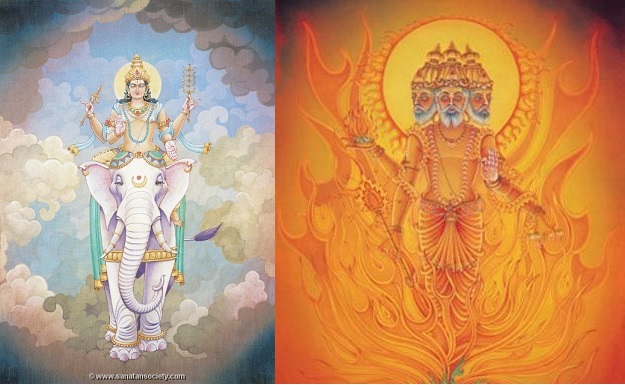 Monotheism is not altogether without a spiritual motive. The Spirit is a unity. It also worships nothing less than the Supreme. Monotheism expresses, though inadequately, this intuition of man for unity and for the supreme.

There is also the fact that once polytheism is admitted, there is a tendency for Gods to multiply to inconveniently large and unmanageable numbers. It is easy to get lost in their crowd. The soul hungers for something simpler and more definite and more manageable. On such occasions, religious reformers appear and use a big broom and sweep away the plethora of Gods. What remains is perhaps not deep enough from a certain angle; but the mind is certainly less cluttered and it can breathe more freely.

When the urge for unity is spiritual, the theology of One God is no bar and the seeker reaches a position no different from Advaita, from ekam sat. He realizes that God alone is, and not that there is only One God.

But if the motive for unity is merely intellectual, it helps little, spiritually speaking. God remains an outward being and does not become the truth of the Spirit. It does not even help to reduce the number of Gods; instead it multiplies the number of Devils – if Christianity is any guide in the matter. We know how Medieval Christianity was chock full of them. In fact, they occupied the centre of attention of the Church for many centuries to the exclusion of everything else. During these centuries, it was difficult of everything else. During these centuries, it was difficult to say whether the Church worshipped God or these devils. One authority calculated that the number of demons was six and a half million. According to another authority, there were 79,05,926 lesser demons presided over by 72 Princes of Hell. All of them were intriguing against the Church and were undermining its work and authority. Each of the Princes had his allotted work. Lucifer promoted pride, Asmodeus lechery, Belphegor sloth, and so on.

The Church also abounded in Gods though they were not as plentiful as the devils. But these were not recognized as such because they appeared in the guise of angels, cherubims, and seraphims. They were organized in nine orders all battling with opposing demons in helping the Church in the task of saving the souls of her flock.

Like monotheism, polytheism too is subject to the despiritualizing influences of the externalizing mind. The Gods of polytheism tend to lose their inwardness and thus they also lose their inner unity. In India, this has happened again and again. On such occasions, sages appeared and by their life and work tried to restore to the Gods their inwardness and unity. The Upanishads were one such attempt. In the Kenopanisad, it is shown how Agni, Vayu, Indra exulted in the victory won for them by Brahma. But they soon learnt their lessons. Agni with what he thought was his own power could not burn a straw, nor Vayu carry it off. Thus they discovered that their strength was not their own; and that their victory did not belong to them.

Again, like monotheism, polytheism too has its spiritual motive. If monotheism represents man’s intuition for unity, polytheism represents his urge for differentiation. Spiritual life is one but it is vast and rich in expression. The human mind also conceives it differently. If the human mind was uniform, without different depths, heights and levels of subterly; or if all men had the same mind, the same psyche, the same imagination, the same needs; in short, if all men were the same, then perhaps One God would do. But a man’s mind is not a fixed quantity and men and their power and needs are different. So only some form of polytheism alone can do justice to this variety and richness.

Besides this variety of human needs and human minds, the spiritual reality itself is so vast, immense, and inscrutable that man’s reason fails and his imagination and fancy stagger in its presence. Therefore, this reality cannot be indicated by one name or formula or description. It has to be expressed in glimpse from many angles. No single idea or system of ideas could convey it adequately. This too points to the need for some form of polytheism.

A pure monotheism God, unrelieved by polytheism elements, tends to become lifeless and abstract. A purely monotheistic unity fails to represent the living unity of the Spirit and expresses merely the intellect’s love of the uniform and the general. Similarly, purely polytheistic Gods without any principle of unity amongst them lose their inner coherence. They fall apart and serve no spiritual purpose.

The Vedic approach is probably the best. It gives unity without sacrificing diversity. In fact, it gives a deeper unity and a deeper diversity beyond the power of ordinary monotheism and polytheism. It is one with the yogic or the mystic approach.

These ideas could be expressed in another way. Monotheism is not saved by polytheism nor polytheism by monotheism, but both are saved by going deep into the life of the soul. In the soul, there are no distinctions between the one and the many. God or Gods do not exist there in the same way as they exist in the intellect.

Depending on the cultures in which they are born, mystics have given monotheistic as well as polytheistic renderings and interpretations of their inner life and experiences. Both of these renderings have been noble and edifying. But One God or Many Gods, purely on the intellectual plane, feed no soul.

In this deeper approach, the distinction is not between a true One God and the false Many Gods; it is between a true way of worship and a false way of worship. Wherever there is sincerity, truth, and self giving in worship that worship goes to the true altar by whatever name we may designate it and in whatever way we may conceive it. But if it is not desire less, if it has ego, falsehood, conceit, and deceit in it then it is unavailing though it may be offered to the most True God, theologically speaking. “He who offers to me with devotion a leaf, a flower, a fruit, or water, that I accept from that striving devotee”, says Lord Krishna in the Gita.

He also assures us that “those who worship other Gods with faith worship me”, for “I am the enjoyer of all sacrifices”. Devotion, faith, austerity, striving in the soul – they all belong to Him; they are His food; they can never go to a false God though so declared by a rival theology.

The fact is that the problem of One or Many Gods is born of a theological mind, not of a mystic consciousness. In the Atharva Veda, the sage Vena says that he “Sees” That in that secret station of the heart in which the manifoldness of the world become one-form”, Yatra Visvam Bhavatyekarupam, or, as in the Yajurveda, “Where the world is rested in one truth”, eka nidam. But in another station of man, where not his soul but his mind rules, there is opposition between the One and the Many, between God and Matter, between God and Gods. On the other hand, when the soul awakens, Gods are born in its depth which proclaim and glorify one another.

Gods are bound to appear when the spiritual consciousness awakens; though in another sense they also fall away, God as well as Gods, with all their outward, anthropomorphic forms, and along with all our conceptions of them, however sublime and exalted.

Yes, even God falls away. For there is a spiritual consciousness which can do without God. Buddhism, Jainism, Samkhya, Taoism and Zen confirm the truth of this observation. In fact, in Buddhism and Jainism, though Gods are plentiful, there is very little of One God. Yet in spiritual perception, insight and attainment, these religions are not less than those where One God rules the roost and is the sole cock of the walk. Spengler tells us, though on the conceptual rather than the spiritual plane, that there are equally profound religions and religious convictions that are theistic, pantheistic, polytheistic and even atheistic.

In any case, those in whom spiritual consciousness has awakened, God is “not this that people worship here”, nedam yadidam upaste, neither One God nor many Gods, but something different, something more inward, and transcendental.

Source: The Word as Revelation: Names of Gods – Ram Swarup, Voice of India

Learning from Mahatma Gandhi’s Mistakes – 2
How 'Rich' was Mughal India?
Nature of the Divine in Hinduism: One or Many?