When Gods choose their own Teertha

There are various stories about how the gods chose their own teerthas. There is a Shiva Linga which froze somewhere; a Krishna who refused to move any more; or a Raghunath vigraha which almost flew to its destination, being that light. What do these stories actually mean? Read on to know. 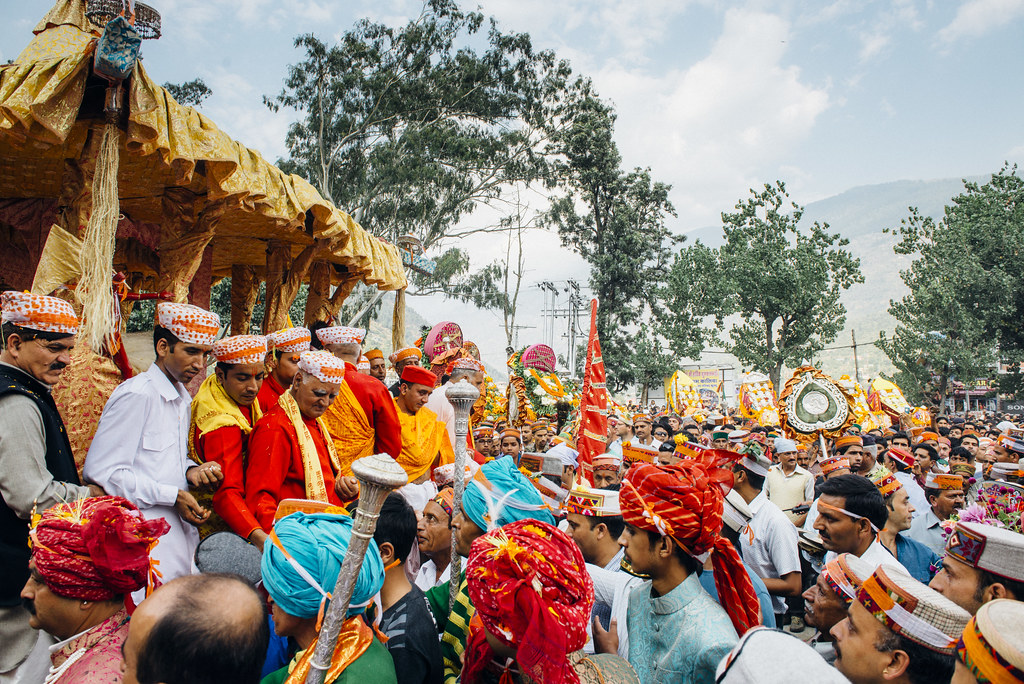 The Hindu Temple is all about ritual. Modern Hindus often miss the point because ancient temples with Agamic rituals are no longer built in most parts of India. And modern temples do follow some Agamic instructions but not many and the point of ritual is often missed.

This ritual is not instituted after the temple structure is built. The ritual is at the root of it. From the moment a sacred land appropriate for the building of the grand temple is identified the rituals start. Actually rituals exist for the finding the land itself. From there till the cleaning of the land and the consecration of the primary vigraha, it is all rituals. The rituals accompany the structure all the way through the construction of the temple and the rituals accompany the priests and devotees after the construction is done.

But like everything else that is Hindu, the Agamas give all the instructions on how to build a temple, down to the last detail, and at the same time tell us the various cases in which it is not necessary to do so and some cases in which almost no ritual is necessary to build temples.

Padma Purana and Paramesvara Samhita classify the Hindu temple into five types, based on the origin of the deity. The Hindu temple according to this classification is divided into categories called:

The temple of Amarnath, which manifested in the 20th century is a swayam vyakta temple and hence does not need consecration and other rituals which are necessary for a manusha temple. Rameshvaram is a daivika temple as its lingam is said to have been installed by Shri Rama himself, along with being a pauranic temple too. The Vitthal temple at Pandharpur, is an arsha kind of temple as it was established by a great saint. The temple at Tirupati is a pauranic type of temple as it is mentioned in the Puranas. And all other kinds, are manusha temples.

“While the first four kinds of places are holy by themselves, the last variety needs to be sanctified by special effort. The background belief was that the entire area which the vimana overlooked was rendered holy. Thus the vimana construction was a means of sanctifying the otherwise ordinary place.” (Rao, S. K. 61)

It is important to note that all the instructions about Vastu are for the fifth kind of temple, the temple built by human beings, the Manusha category. While the scriptures pour forth on every little detail about constructing a temple, they do not lose sight of the fact the temple above all is a sacred structure and thus the simplest of structures, if fulfilling this need, becomes as sacred as the grandest of temples.

Why is this relevant? For Dusshehra is a festival which is pan-Indic. It is not regional and there is no region in India which does not celebrate this festival. Some regions celebrate it with more passion than others. And it is not just Mysore. Kullu in Himachal Pradesh is also very famous for celebrating Dusshehra. The Yatra that is taken out in Kullu on Dusshehra is something to attend at least once in a lifetime.

The story that connects Kullu to temples and worship which is more meaningful in the context of Dusshehra. According to a legend, Maharshi Jamdagni was traveling to some place carrying a basket of vigrahas of eighteen deities on his head. At Chanderkhani Pass near Kullu a snow storm came and he lost his footing. The basket fell throwing off the vigrahas helter-skelter all over the hills. As the locals found these vigrahas, they started worshipping them and gradually these different places in the hills became famous for the particular deity’s vigraha that had fallen at that place.

According to another legend, Maharshi Jamdagni did penance for Shiva who gave him the place at Malana for doing more tapas. Maharshi’s brothers were also with him who chose different places like Spiti and Banjar valley for doing tapas. But at Malana, the Maharshi came in conflict with a demon Banasura, who had a fight with the Maharshi. At last a compromise was reached and though the land was ruled according to dharma, worship was offered to the demon Banasura too.

But there are various other legends which connect Kullu to the sacred geography of India. And this legend connects Kullu to Shri Rama. Raja Jagat Singh in 16th century, ruling over Kullu, committed a horrible sin. It was decreed that only Shri Rama can absolve him of the sin. His followers went to Ayodhya and took the vigraha of Shri Raghunath Ji or Shri Rama and started off towards the way to Kullu.

When the people of Ayodhya found them and tried to take the vigraha back to Ayodhya, the legend is that they found it to be very heavy when they tried to take it back to Ayodhya and very light when they would take it towards Kullu. This was understood as the divine wish of Shri Rama to go to Kullu and bless the mountain valleys.

This is how the vigraha of Shri Rama was installed at Kullu and Kullu was connected to the sacred circuit of Dusshehra celebrations all over India. starting off from Dusshehra, Kullu takes out processions of Shri Raghunath Ji and for seven days festivities are kept alive.

Diana Eck tells us that this is how the sacred geography of India is created and recreated. This is how kshetras are sanctified and re-sanctified with legends upon legends. The myths reinforce the sanctity of the place and the place by its mention in the myth provides geographical certainty to the legend. Mythology and geography reinforce each other in this land of Sanatana Dharma and that is how Bharatvarsha becomes a big sacred kshetra with an acute realization of its geography.

What is most important about this story of Raghunath Ji at Kullu is that Shri Rama himself chose the site as his seat. The sanction here is divine and this makes it a Daivika shrine which makes all the rituals to sanctify it unnecessary. Though the rituals exist but this place is sacred in itself.

The legend of Jamdagni makes it an Arsha shrine where a great sage located and sanctified it, once again making the rituals to consecrate it unnecessary. This is how Sanatana Dharma works. While on one hand it provides all the rules in the world which helps in not only creating and maintaining social structure but also reinforcing it through the reinforcement of sacred geography and through the rituals instituted there.

On the other hand, it also makes sure that there are ways out of these rules, and there are exemptions to these rules, proving that rules exist for dharma, for society, but there are always exceptions to them in different times and spaces. More importantly it proves that those who have divine sanction through tapas and meditation they need very few rules.

I know of no other tradition anywhere else in the world which at the same time takes care of society and its rules, and on the other hand also gives exemptions of various kinds for those who can’t follow these rules and those who will be outcast according to them. Sanatana Dharma excludes for a purpose, to exhort the excluded to aspire for greater spiritual achievements, but also takes care that those who excluded who cannot rise to the higher planes of consciousness are still included somehow in the wider network of Sanatana Dharma which excludes no section of dharmic society.

This is why this land is Sanatana. This is why make sure that once in your life do go to Kullu to attend the Dusshehra there.

We hope that this Dusshehra Shri Rama really has defeated the enemies of Prophetic Monotheism and this Diwali he really comes back to Ayodhya.

Matter or Consciousness – What Came First?
The Fifth Veda
Ways of the Jnanis - 1 - King Janak's Dream