‘Devi’ in her own words

Who is Durga? What are her attributes? Nithin Sridhar in this short piece analyzes Hindu scriptures that sing about the Great Goddess and tells us who Durga is. 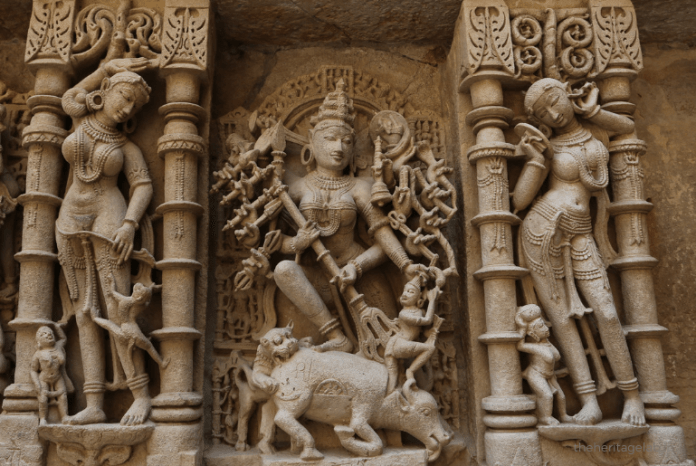 The Hindus of the yore, many of whom were Rishis (seers) very clearly perceived the connection between time, place, and cosmic energies. They realized how a particular fortnight was most conductive for the Pitrs– the spirits of ancestors to visit the earthly plane and named it as Pitr-Paksha, a time that is most suitable for worship of ancestors.

Similarly, they realized that though God/Brahman is always present everywhere and one should always practice devotion for spiritual and material welfare, there is indeed a particular fortnight when Shakti, or the Power of Brahman specially manifests in the earthly plane in her various aspects.

They discovered that this fortnight is particularly auspicious for worshiping Shakti, who is also called as Maha–Devi (˘The Great Goddess) and as Jagan–Mata (Mother of the universe), in her various forms, and harness the power/energy as well as the Tattva(essence) associated with each of the forms. Further, the Anugraha(grace) of the Great Mother is particularly available during these periods that can be attained through Sadhana(spiritual effort).

Realizing thus, the Hindu forefathers named the fortnight in the Ashvinimonth (September-October) that begins right after MahalayaAmavasyaas ‘Devi Paksha’– the fortnight of the Goddess. The festivals of Navaratri, Durga Puja, Dasaraetc. have all been celebrated in various parts of India from a very long time for welcoming the Mother Goddess and worshiping her.

People call Her by various names and worship Her in various forms. She is called as Durga, Kali, Tripurasundari, Lakshmi, and Saraswati. She is worshiped in her SowmyaRoopa(calm aspect) of Shailaputriand Brahmacharini, as well as her RaudraRoopa(fierce aspect) of Katyayaniand Kalaratri. She is also worshiped as DashaMahavidya– the Ten Wisdom Goddess.

But, who exactly is Mother? What is her real Swaroopa(nature/essence)? The answers to these questions are given by Devi herself in ‘Devi Atharvashirsham’.

In the Devi Atharvashirsham, when the Devas (gods) approach the Great Goddess and ask her “Oh! Great Goddess, who really are you?”, the Goddess describes her true nature thus:

Translation: She said: I am the very nature/essence/form of Brahman. From me (has manifested) the entire cosmos consisting of Prakriti and Purusha, (as well as) void and non-void.

Thus, the very essence is that the Mother Goddess is Brahmanitself. She is not a demigod, she is not an angel and she is not any limited manifestation. She is not limited by time, space, name, or form. Instead, she is Brahman itself which is the one infinite whole- the very substratum of the Universe.

The gist is, the Goddess is telling us that while worshiping her various forms, people should not mistake her form to be the ultimate truth. Instead, they should understand that she is in essence, Brahman itself, who is both transcendent and immanent reality.

She further calls herself as the mother, the substratum from which the Universe of duality has manifested. The duality referred here as Purusha and Prakriti, refers to the duality of conscious intelligence and the material objects, the witness and the actions.

The Goddess does not finish her explanation here. She further stresses that she is behind all the dualities- the pair of opposites found in the Universe. She says that she is the Bliss as well as non-bliss, the Veda as well as non-Veda, and the knowledge as well as the ignorance.

She further says that she is both ‘born’ and the ‘unborn’ i.e. She takes birth, yet she is eternal. This is an interesting definition. The law of nature is that whatever takes birth must die and hence, such objects cannot be eternal. Similarly, what is eternal, cannot take birth.

Yet, the Goddess has described herself as both being eternal and as taking birth as Universe. She is called as ‘Maya’ (magic/illusion) in Vedanta because she alone is able to accomplish such an impossible task. In other words, the birth of the Goddess as Universe and its objects is merely an appearance, a mirage, that she manifests using her power and in absolute state, she is eternal.

Devi further describes in the Atharvashirsha, how she is the essence and substratum of all deities- be it Rudra, Indra, Vasu, Aditya, or Vishnu, and how she sustains and cherishes each of them. She points out that she is the first among those worthy of worship, i.e. She being the very essence of all deities, it is She (Brahman) who receives the worship and grants the fruits to the worshiper.

She further describes that her abode is in ‘waters of the oceans’. Here, the ocean refers to Brahman or Consciousness which is Infinite and which exist as Innermost Self/Atman in each creature. Water of this Atman is nothing but the thought patterns that arise in the mind, just as water waves rise in the ocean. Hence, by saying that She resides in these waters of through patterns, Goddess is teaching how one should attain Devi/Atman, by meditating on the ‘I-ness’ or ‘Witness’ that exist beneath each thought that arises in mind.

Thus, through Devi Atharvashirsham, the Mother Goddess herself describes both her real nature as well as the means of reaching her. Understanding this, people should worship the Maha-Devi, who appears variously as Chamundi, Kali, or Durga, with sincere devotion and surrendering during the nine nights of Navaratri.

[This article was first published at Newsgram.]