This article by Mangesh Joshi delves into the life of Madanlal Dhingra, a freedom fighter and a martyr who set the path for many more freedom fighters who came after him. Read this inspiring tale. 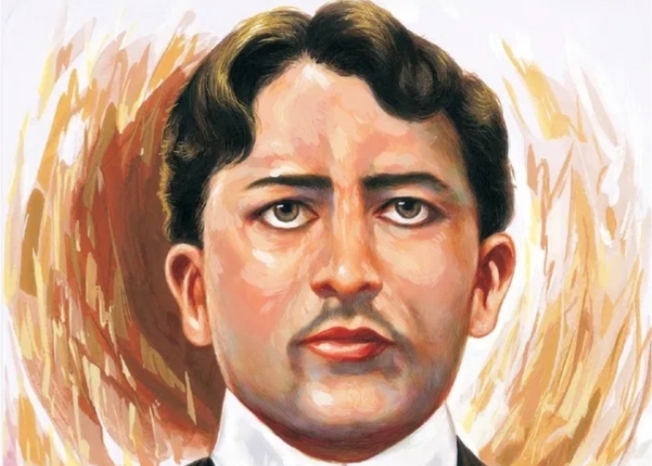 Madanlal Dhingra was born on 18th September 1883 to an affluent family in Amritsar. His father, Sahib Ditta Mal, was an eye surgeon. Madanlal had seven siblings: six brothers and a sister. It is interesting to note here that Madanlal’s eldest brother, Kundanlal, had amicable relations with Sir Curzon Wyllie- an official of the British Government whom Madanlal would eventually assassinate [1]. If we are to look at the educational and professional background of Madanlal’s brothers, Mohanlal and Beharilal earned their respective degrees in medicine, Chamanlal was a Bar-at-Law from London, Chunilal served a Munsif in Jammu, Kundanlal was a businessman, and the youngest Bhajanlal pursued Bar-at-law in London. It is evident that Madanlal belonged to a highly educated family, who incidentally were also British loyalists. However, much to the annoyance of his father, Madanlal took an interest in politics even as a student in India. He was ultimately suspended, owing to his involvement in politics. Finally, at the insistence of his family, he went to London to pursue mechanical engineering.

Shyamji Krishna Varma, the well-known pro-Independence activist and the founder of the Free India Society in London, had also founded the India House as a lodging facility for Indian students. It was a large mansion situated in North London. Shyamji also offered various fellowships to Indian students on the condition that they would never work for the colonial bureaucracy in India, thereby “alluring them away from the charm of Government jobs towards the service of the motherland” [2]. India House soon became the centre of the Indian revolutionary activities in London, under the leadership of Savarkar. Some of the prominent members of the group included Savarkar, VVS Aiyer, Dr Rajan, MPT Acharya, Gyanchand Varma etc. Dhingra was also a part of the group and a regular attendee of their meetings.

Dhingra considered eliminating Lord Curzon- the man responsible for the partition of Bengal. He made an attempt, but it was unsuccessful. He then decided to take out Sir Curzon Wyllie, the political Aide-de-Camp to the Secretary of State for India- Lord Morley. Wyllie was involved in the surveillance of the revolutionaries in London, especially the members of the India House. As Brückenhaus writes: “Wyllie’s job was to keep an eye on their movements, the contacts they made on the European continent, and the level of official recognition that they were to be granted by continental governments” [3]. He was one of the heads of the Lee Warner Committee. Lee Warner himself was assaulted a couple of times by Indian students in the early 1909.

On the first July of 1909 was the annual gathering of Dadabhai Naoroji’s Indian National Association in London. The event witnessed a considerable turnout with over three hundred attendees, most of whom were Indian students. Many senior officials were also present, Wyllie being one of them. Koregaonkar and Gyanchand Varma went along with Dhingra, on the instructions of Savarkar. In fact, Koregaonkar is said to have given Dhingra the “final word of encouragement” before he took a shot at Wyllie [4].

Following the dinner, as Wyllie was walking down the stairs, Dhingra went to see him. It seemed a formal greeting to Wyllie, but Dhingra suddenly drew forth his pistol and fired five shots. It was an instant death for Wyllie. A Parsi doctor Cawas Lalcaca came to Wyllie’s rescue and pounced on Dhingra, following which two more shots were fired, leaving the Parsi doctor mortally wounded. There lied the lifeless body of Wyllie in a pool of blood, with his wife weeping by his side. Seeing that Dhingra’s handgun was now out of ammunition, a few of the guests overpowered Dhingra although he made no attempt to flee. He remained calm throughout and did not lose his composure. In the medical evidence presented later during the trial, it was observed that “when arrested, Dhingra’s pulse beat no quicker than was normal, nor from first to last has he shown any sign of weakening” [5].

Lord Morley was shocked upon learning about the assassination. Now he was certain that the Indian displeasure would “be sure to run into the same channels of violence as Italian, Russian and Irish discontent” [6]. Lord Minto in India, on the contrary, was optimistic. He presumed that Indians would “at last realise the danger of allowing the hatching of sedition in their midst—not only for themselves but for us in India” [7]. Some members of the Secretary of State’s Council were of the view that Dhingra be transported for life, but Morley insisted that capital punishment be given to Dhingra. He wrote to Minto: “We hang a murderer when we are likely to contact one and so we shall hang Dhingra” [8].

As an immediate consequence of the assassination, both Morley and Curzon were put under protective surveillance by the Scotland Yard. Morley also suggested formulating an Indian section of the Special Branch, which was setup later that month [9]. The Director of Criminal Intelligence, Charles Stevenson-Moore, wrote in September 1909: “the London police may be trusted henceforward to utilize all the resources at their command in order to keep in touch with the movements of the more dangerous extremists in London” [10].

The Department of Criminal Intelligence, henceforth referred to as the DCI, had received a report by the end of June 1909 that “the situation in London was more dangerous than they had hitherto suspected” [11]. Some of the India House members used to practise revolver shooting at a range near Tottenham Court Road and also used an airgun in the rifle range at the back of the India House. Following the assassination, the owner of the rifle range told the police court that Dhingra had visited the range for practice on the day of the assassination [12]. The police were now much more vigilant against the activities of the Indian students in London. David Garnett, the Irish writer and a friend of Savarkar and others at the India House, later wrote: “My friends were kept under a close watch by Scotland Yard, and there was usually a detective hanging about, watching their lodgings or following them in the street… It was an easy matter to shake these detectives off in the tube railways” [13].

There was also an interesting incident involving Savarkar, Aiyer, Acharya and other India House members at the Caxton Hall. To give a brief overview of the chain of events, some prominent Indians had organised an assembly, three days past the assassination, to condemn Dhingra and his act. At the meeting, several eminent Indians spoke in condemnation of Dhingra’s action. As it progressed, Aga Khan declared that the meeting would unanimously offer a resolution of censure against Dhingra’s action, to which Savarkar objected. Hearing Savarkar’s name, a mayhem broke out, and a brawl followed. Savarkar suffered a blow to his forehead at the hands of a Eurasian, who in turn received a retaliatory punch by Acharya. To make a precis of the outcome, the meeting ended without passing the resolution.

A written statement was found on Dhingra’s person at the time of his arrest, but it was suppressed by the police. During his trial, Dhingra offered no defense. His only wish was that he be allowed to read out the written statement. Dhingra’s words during the trial:

I have told you over and over again that I do not acknowledge the authority of the Court, You can do whatever you like. I do not mind at all. You can pass sentence of death on me. I do not care. You white people are all-powerful now, but, remember, it shall have our turn in the time to come, when we can do what we like [14].

Savarkar later managed to find a rough draft of Dhingra’s statement at his desk. He turned it into a fair copy and got it published in the Daily News, with the help of Garnett. Gyanchand Varma posted some copies to various Irish and American Newspapers. The statement that appeared in the Daily News reads as follows:

I admit the other day I attempted to shed English blood as an humble revenge for the inhuman hangings and deportations of patriotic Indian youths. In this attempt I have consulted none but my own conscience. I have conspired with none but my own duty.

I believe that a nation held down by foreign bayonet is in a perpetual state of war, since open battle is rendered impossible to a disarmed race. I attacked by surprise; since guns were denied me I drew forth my pistol and fired.

As an Hindoo I felt that wrong to my country is an insult to God. Her cause is the cause of Shri Ram, her service is the service of Shri Krishna. Poor in wealth and intellect, a son like myself has nothing else to offer to the Mother but his own blood, and so I have sacrificed the same on her altar.

The only lesson required in India at present is to learn how to die, and the only way to teach it is by dying ourselves. Therefore I die, and glory in my martyrdoom (sic).

This war will continue so long as the Hindoo and English races last (if this present unnatural relation does not cease).

My only prayer to God is may I be reborn of the same Mother, and may I re-die in the same sacred cause till the cause is successful, and she stands free for the good of humanity and to the glory of God- BANDE MATARAM [15].

Dhingra’s last words were: “My wish is that I should be born again of the same Mother and that I should die the same death for her again” [16]. Wilfrid Scawen Blunt, the English poet, describes in his diaries his conversation with Churchill with regard to Dhingra. Churchill said that “there had been much discussion in the Cabinet about him [Dhingra]” [17]. Churchill talked highly of Dhingra and quoted Dhingra’s last words as “the finest ever made in the name of patriotism” [18].

Dhingra’s action rejuvenated the revolutionary movement both within and without India. As a London newspaper New Age noted:

India in the future will regard him as a hero with full responsibility; we say India will be right. Our own opinion must be put on record. It is the beginning of the end of British rule in India [19].

Dhingra faced the gallows on the morning of 17th of August. It would be apt to end the writeup with the words that Blunt spoke in Dhingra’s admiration: “No greater fortitude was ever shown by a martyr for any faith. With such men to love her, the Mother India must succeed” [20].