The Significance of 108 in Indian Cosmology 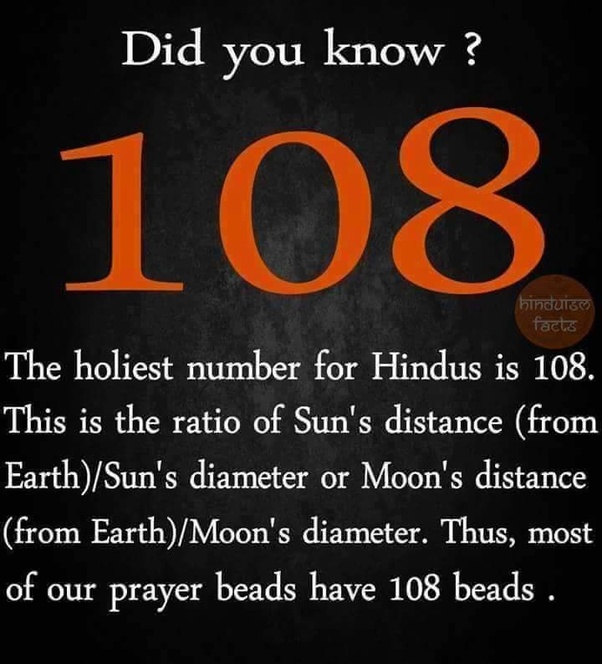 An esoteric and very interesting number in Indian cosmology is 108. The usual explanation given for its importance is its relationship to the number 18, as evidenced by the eighteen Puranas, and the eighteen chapters of the Bhagavad Gita, with the number 108 obtained from 18 by slipping a zero in between 1 and 8, doing this again leading to 1,008. But this explanation isn’t quite satisfactory. Why is 18 holy, to begin with? And if it is, why doesn’t slipping a zero in between 1 and 8 destroy that holiness? If it doesn’t for whatever reason, leading to 108 and 1,008 in two stages, why doesn’t it lead to 10,008 and other larger numbers?

Another theory is that 108 is 27 times 4, that is, 27 naksatras (constellations in the Moon’s monthly circuit) multiple by the four cardinal directions. While this is interesting, in reality, the Moon takes 27 1/3 days to complete its circuit, and not exactly 27.

Three facts that any book on astronomy will verify are the following excellent approximations:

The knowledge of the first two by the Indians shouldn’t surprise, because these can be calculated by anyone without the need for any instruments. Take a pole, mark its height, and then remove it to a place 108 times its height. The pole will look exactly of the same angular size as the Moon or the sun.

I don’t believe the Indians knew the third fact, that is the Sun is 108 times as large as the Earth, because there is no evidence of it in the old astronomy texts.

Since Indian thought takes the outer cosmology to be mirrored in the inner cosmology of the human, the number 108 is also taken to represent the distance from the man’s body to the consciousness within. The chain of 108 links is held together by 107 joints, which represent the number of marmas, or weak spots, of the body in Ayurveda.

Each zodiacal sign is divided into nine parts (navamsa), making a total of 108 parts, each with its own presiding deity. The 108 beads of the rosary (japamala) must map the steps between the body and the inner Sun. The devotee, while telling beads, is making a symbolic journey from the physical body to the heavens, or is tracing the motions of the Sun through its 108 steps.

The number 108 joined to the name, as is done by some abbots, is to claim that one is a spiritual adept, a master of the journey of 108 steps through the intermediate regions of danger. The other number 1,008 has a slightly different basis. Aryabhata’s astronomy divides the Kalpa (the day of Brahma) into 1,008 yugas. The use of this number as a title is to assert that one knows the mystery of time from creation to annihilation.

The number 108 appears in many settings in the Indian tradition. The Natya Sastra of Bharata speaks of the 108 Karanas – combined movements of hand and feet – of dance.