The Living and the Historical Temple

Which is better? The living or the historical temple? The living institution or the historical structure? In this article, Pankaj Saxena discusses the possible attitudes that we can take about maintaining our heritage. It is both a reservoir of our history and also a living institution. How to treat the Hindu Temple will also be telling about how the Hindus are going to treat their heritage and culture in general. 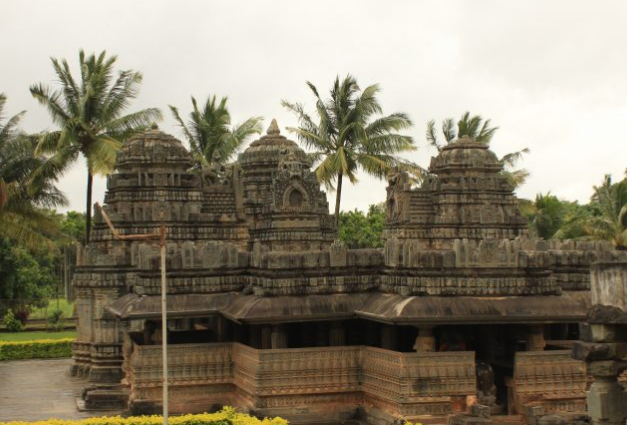 A winding country road in Karnataka without blemish. Foothills of the Sahayadris. Mid monsoon. Fine drizzle. Banyan trees lining up on both sides of the road, suddenly opening up every now and then to give a breathtaking view of a paddy field dotted with massive trees. I reluctantly take my eyes away from this heavenly scenery every now and then to look at my GPS location. It is approaching! The great temple 11th century Chalukya temple of Kedareshwar, Balligavi.

The famous profile of the trikuta temples with three adjacent Vesara shikharas breaks upon you suddenly. There is no time to adapt. Its splendor instantly overwhelms you. The soapstone has weathered beautifully. There is a quaint archaic beauty to the texture and profile of the temple. The main temple is dedicated to Shiva. A huge Nandi still stands majestically in front of the garbha-griha. The most famous feature of the Chalukyan architecture, its beautifully sculpted, lathe-turned pillars still bearing weight of the temple mesmerize you.

It was once one of the largest Agraharas in the region but deteriorated over time under repeated Islamic invasions. Only the temple remains now. The Agrahara is long gone. While the most concrete symbol of Hindu civilization survives, the intangible cultural institutions disappear under repeated invasions. The desecration of the temple becomes obvious only upon close inspection, sculpture being less immune to the hammer and tongs of the devout Muslim, than architecture.

Cut to a completely different scene. A crowded road in Chennai, chock full of traffic. Mylapore! Ancient and modern at the same time. Temple spires and steel and glass buildings competing to dominate the landscape. The temple I am visiting, dedicated to Adi Kesava Perumala (Vishnu), is a very old one and is connected deeply to the temple legend of the Kapaleeswarar Temple. Legend says that it was in this temple that Shiva was absolved of ‘Brahma Hatya’, after he cut off one of the heads of Brahma.

The gopuram is moderately high but everything inside the temple is average, architecturally speaking. Modern adaptations, useful but ugly, ruin the ambience of the temple. There is no angle which justifies the architecture of the temple. Modern adaptations work as distractions. The gopuram is brick and mortar, with the paint redone every twelve years. But as soon as I enter the temple, I can sense the ancientness. The deities are preserved in perfect condition. The temple is living.

I cannot help but recognize types and draw comparisons. On one hand are the ancient temples like that of Karnataka which still show glorious examples of great Hindu architecture and on the other hand are the temples of the Tamil Nadu, living but with massive adaptations.

The Tamil Nadu temples have been functioning for a thousand or more years with no or little interruption. They are living institutions and the pressure of increasing devotees and the interim poverty in which India was plunged in the colonial era, has taken some toll on them. The modern adaptations are ugly and deforming. Encroachment has been seeping under the temples.

The acutely aesthetic Hindu, in order to preserve the primary goal of keeping the temple alive, has abandoned all aesthetic sense and even pretense. The paint on the temple seems sloppy, the paintings cartoony, and the extensions seem cancerous, destroying the beauty and the profile of the temple. But they have succeeded in their primary goal. The temple is living, the devata is alive. The worship continues and the great tradition perpetuates.

On the other hand, there is the ruined temple of Karnataka, ruined and destroyed many times by the Muslim invaders, the sculpture conveying its beauty only as a corpse testifies to the beauty of the human being it once was. There is a sense of dereliction, loved dearly by students of architecture and by photographers, but not endearing to a devotee.

The manicured lawns all around and the ASI museum nearby testify to a change in the ownership. The temple as an institution is gone; and has been taken over by the discipline of archaeology where the primary objective is to preserve the building in the ‘mint’ condition, trying to add as little as possible, restoring only as much as is necessary to support the structural profile.

Time freezes in temples like this. Every sculpture becomes a museum, relaying its long and painful history of repeated invasions. Every hammer and tong of the devout Muslim is still visible on the broken noses and disfigured faces of the deities and the attendants. Every sculpture screams about the long and cruel history of the Islamic devastation of India.

While the Tamil Nadu temples have incorporated other materials over time, using brick and mortar along with stone, most of the Chalukya and Hoysala temples in Karnataka are pure stone, with no brick and mortar used anywhere in them. The Agamas value a temple built in just one unadulterated medium more than temples built in a mixture of materials.

In a country where academia lies so completely that the Hindu no longer retains the memory of the Islamic destruction, where the media works day and night to make him guilty of everything Hindu, it is these half-destroyed temples, frozen in various states of destruction that still tell the story of the unimaginable devastation that India received at the hands of Islamic invaders.

I am using these temples as types and not absolutes. One category led by the Karnataka temples mainly showcases architecture and the other represented by most temples in Tamil Nadu showcase temple as a living institution. I am sure there are exceptions in both cases. Most of the great temples in the North are living but with no ancient architecture left. Some of them are quite new but still living and vibrant.

And so the dilemma faces the Hindu. What attitude should he take about his temples? Should they be preserved in their original state? Or should they adapt according to times, and add more structures? Should they use only stone and the now hard to find skills of perfectly aligning the stones and not using binding material or should they use the modern materials and building techniques too?

What is more important? History or functionality? Shall a temple be renovated and the signs of its destruction suppressed under the weight of the new construction? Or it shall remain as it is, compromising functionality for the sake of history? Shall it be painted with lively colors, making it more alive but maybe less beautiful? Or shall it maintain its monochrome sepia tone, with no paint spoiling the beautiful pink sandstone, the black soapstone or the gray granite?

Which is better? The living or the historical temple? What is more important? The living institution or the historical structure? Which is favorable? A temple which is living but comprising in architecture? Or a temple which is frozen in time and no longer a functional institution, unable to accommodate the modern crowds, but standing as beautiful as ever, and also tells the story of its destruction?

Is it an irreconcilable dichotomy, or is there is a middle path?

The historical temple retains its pristine charm, even in its dilapidated condition. It remains beautiful, awe-inspiring. It tells the story of its destruction, aided through the lack of renovation. On the other hand, it is not a living institution anymore. It reminds us of what we lost. It is more important to history than people; it is of more value to a historian than a devotee.

The living temple hardly retains any concrete identification of its ancient past, except the deities in the garbha-griha. The heritage that it engenders and perpetuates is more intangible than concrete. It is more about people and institutions rather than the structure. It has achieved one of the primary goals of the temple guardians during the destruction in the Middle Ages. It has managed to keep the deity alive and the temple, a living institution.

Like most dilemmas of life, this one is also a struggle between the heart and the mind. Somewhere secretly in my heart, I love temples like Kedareshwar, no longer living and bustling with life, but quiet and isolated, preserving their ancient beauty and pristine quality. But my mind knows better, and is thankful to the temples that have gone to great lengths to preserve the institution even at the expense of architecture.

While I love the historical temple, being a student of architecture, I also remember how my wife, primarily a devotee, comes alive in a Tamil Nadu temple, instantly throwing herself into worship, lighting lamps, performing aarti, doing parikrama, applying ash on her forehead. While the historical temple interests her once, in the living institution she can lose herself completely for hours, becoming a part of it herself. More than a spectator, she becomes a devotee, arguably the primary purpose of coming to a temple.

I also remember the admonishing of Banvari Ji, the Gandhian nationalist living in Delhi. He says that the Hindu culture has a provision of renovation, called jeernoddhar, in which a desecrated temple is renovated and worship starts. What the ASI has done is to turn them into permanent museums. I agree with him but I also want to preserve history and preserve the little islands of ancient glory that the historical temple in India has become.

These are questions of which the implications are not restricted to the temple tradition alone. They are also questions about the Hindu identity as a whole. As we negotiate a turn in history, where the Hindu civilization is no longer directly ruled by others, where the Hindu psyche is waking, albeit under great threats from renewed vigor of its many enemies, we need to renegotiate our identity too.

We need to define in these times of ideological crisis, what from our past we need to carry, and what we need to leave behind. We need to decide the nature of our identity, of our institutions and our cultural heritage too. Temple, at the same time, being extremely concrete and extremely subtle is a great way to start. If the Hindu is sure about the identity of our temples, he will find it easier to answer the questions about the Hindu identity too.

As I leave the precincts of the Kedareshwar, and proceed towards another great historical temple, the Kaitabheshwar at Kubatur, I sincerely hope that something of both, the historical, and the living temple, survives.

[The article was first published at Swarajya Magazine.]