The Palghar Lynching of Hindu Sadhus has shaken the conscience of many Hindus. The case is still not clear. The area is known for violent Christian missionary activity, and the NGO which is trying to arrange for the release of the accused in the case has ties to the Church. Moreover, the recent mysterious death of the VHP assigned lawyer to the Hindu side, Digvijay Trivedi in an ‘accident’ during the lockdown makes the case even murkier. This article discusses how the Church routinely fills tribals’ hearts with hatred of everything Hindu. 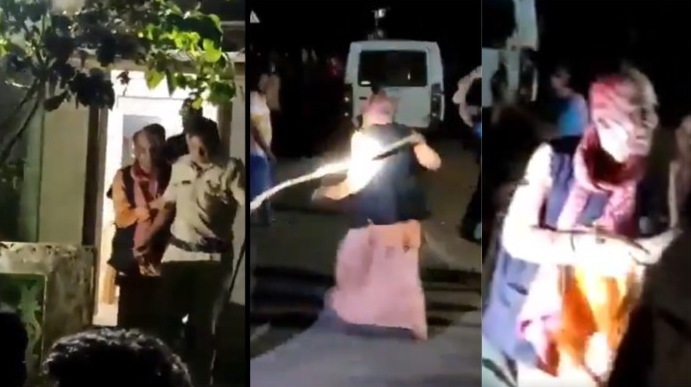 The recent Palghar Lynching of Hindu Sadhus has shaken the conscience of many Hindus. The case is still not clear. The area is known for violent Christian missionary activity, and the NGO which is trying to arrange for the release of the accused in the case has ties to the Church. Moreover, the recent mysterious death of the VHP assigned lawyer to the Hindu side, Digvijay Trivedi in an ‘accident’ during the lockdown makes the case even murkier.

The complete truth will still take some time to come out, but it is clear that directly or indirectly the Church is involved. The hatred of Hindu saints, Brahmins and the wider Hindu society that is inculcated into the tribals by the Church often leads to many such clashes in which the Hindu side is often at disadvantage. Looking at history we find that this crusade against natural polytheistic religions is nothing new to Christianity. Christianity has been habitually destroy pagan, polytheistic religions all over the world ever since its advent. Here is such an incident:

“One early spring day during the year 415 in the city of Alexandria—the intellectual heart of the waning Roman Empire—the pagan philosopher Hypatia was murdered by a mob of Christian men. These men, the parabalani, were a volunteer militia of monks serving as henchmen to the archbishop. Their conscripted purpose was to aid the dead and dying but they could be more readily found terrorizing opposing Christian groups and leveling pagan temples. At the urging of Cyril, bishop of Alexandria, they had already destroyed the remains of the Library of Alexandria. The parabalani razed pagan temples, attacked the Jewish quarters, and defiled masterpieces of ancient art they considered demonic by mutilating statues and melting them down for gold. They now set their gaze on the city’s beloved teacher of mathematics and philosophy, whose social ranking was on par with Alexandria’s most important men. Understanding nothing of her philosophy, they called her a witch. They pulled the elderly teacher from her chariot as she rode through the city and dragged her to a temple. She was stripped naked, her skin flayed with jagged pieces of oyster shells, her limbs pulled from her body and paraded through the streets. Her remains were burned in a mockery of pagan sacrifice. Hypatia’s death marked the end of paganism and the triumph of Christianity, the final act of a one-hundred-year-old feud waged by the new religion against the ancient world.” – Soraya Field Fiorio

This is how Christianity destroyed paganism in ancient Europe and the Mediterranean. It always had a penchant for destruction. The Bible and Christian theology consider every religion other than Christianity as inspired by Satan and inherently evil. The followers of Jesus considered it their sacred duty to destroy pagan temples and pagan culture wherever they found them. For the pagans were considered, just like Hindus are in India, the worshippers of the Devil. It was the sacred duty of the Christians to kill those pagan priests and everyone else who resisted the violent conversion to Christianity.

Hypatia was a flagrant negation of everything Christian. She was a woman and yet did not wear a veil. She was a woman and yet she did not follow the diktats of men. She actually led a library, full of spiritual and scientific knowledge, full of pagan books and pagan authors, authors who were considered heretics and worshippers of the Devil by Christianity. The Christians were forbidden to read anything other than the Bible. And here Hypatia was actually the master of a library full of pagan books. The Christians considered women as nothing but an afterthought of YHWH and an appendage to men and here she was leading a library and independent thought. How could they spare her? The murder of pagan Hypatia by fanatic Christians ushered in the Dark Ages. The Western world could not come out of that Christian darkness for 1200 years.

Christianity is a theology of hate. Hate against everything pagan, Hindu, non-Christian and good under the sky.

One more example from Catherine Nixey would suffice:

“Their attacks were primitive, thuggish, and very effective. These men moved in packs – later in swarms of as many as five hundred – and then they descended utter destruction followed. Their targets were the temples and the attacks could be astonishingly swift. Great stone columns that had stood for centuries collapsed in an afternoon; statues that had stood for half a millennium had their faces mutilated in a moment; temples that had seen the rise of the Roman Empire fell in a single day.”

Until the last line gives it away, this account seems to be an account of the destruction of Hindu temples in India during the medieval ages, when Islamic invasions were devastating India. But no. This is not a story of Islamic invasion. Islam has its fair share of death, destruction, devastation, massacre and vandalism. But this is a description of the Christian destruction of pagan, polytheistic Rome and Greece. Greece was the font of knowledge with philosophers roaming every street of Athens. Christianity, as soon as it became the state religion of Constantinople, systematically and completely destroyed Greek paganism, with the help of the State and the Army, and often aided by fanatical Christians.

Yes, Christianity is as violent against its victims, as intolerant against paganism, as destructive of art and everything creative, and as predatory against followers of other faiths. It has a history of wiping out thousands of ancient religions in Europe, the Middle East, Americas, Africa, Australia and elsewhere. And the destruction of paganism was as violent as Islam’s destruction of India or Persia was. Here is what St. Augustine said:

“That all superstition of pagans and heathens should be annihilated is what God wants, God commands, God proclaims!”

This is what Jesus said he wanted to do:

What happened in Palghar may or may not have been the direct action of the Church. However, there are reports that the Church is involved as it is trying to bail the mob lynchers out, through its proxy NGOs. Even if no Christians are directly involved, it will be remembered that Christianity instills hatred of everything Hindu in its followers. Indian Christians are routinely told to break the murtis of Hindu deities upon conversion, to eat beef, and to disrespect every Hindu ritual and custom. They are also taught hatred against Hindu leaders, priests and saints. Brahmins and Hindu saints are routinely demonized as monsters. Fascist venom spewers and professional hate mongers like John Dayal and Kancha Illiah, both Christians, routinely write genocidal and violent tracts against Brahmins and Hindu saints, inciting common Christians and even many Hindu castes for violence against Brahmins and Hindu saints.

On the other hand, Hindu tribals are converted with force, often on gunpoint and threatened with rape, murder and violence upon non-compliance with missionary agenda. All hilly states of India with the exceptions of Himachal Pradesh, Uttarakhand and Sikkim have been violently and forcibly converted to Christianity and the dirty game of conversion goes on in all tribal areas of India, including the border of Gujarat and Maharashtra, where Palghar lies.

Sita Ram Goel with the publication of Neogi Committee Report had warned the sinister plans of Christianity more than 20 years ago. Arun Shourie has warned us with his brilliant books exposing the tricks of missionaries, including ‘Harvesting Our Souls’. A K Priolkar has revealed the extremely bloody history of Goa under Christian Portuguese in ‘Goa Inquisition’. Ishwar Sharan has revealed the dirty tricks and conversion techniques of missionaries in his brilliant work ‘The Myth of St. Thomas and the Mylapore Shiva Temple’. We ignore all these warnings are our own peril.

The incident at Palghar is the result of the Christian hatred that missionaries have instilled in tribals and common Hindu public. This is an ideological crime, a crime which had been brewing up in the Hinduphobic and violent tracts of venom spewing Christian priests and peddlers. If their sinister network is not dismantled soon, these mob lynchings of Hindu sadhus will become common by every passing day. And what happened to pagan Europe, may happen to India too. India’s heritage, art, culture and its very people stand to be destroyed by the violent ideology of Christian missionaries.

Hagia Sophia and the Return of Islam
The Redeemer Complex: The Religious Roots of Genocide – Part I
Prophetic Monotheism: The Longest Running Pandemic in History