7 Ganeshas from 7 Temples Across India

In this article, Pankaj Saxena discusses seven most exquisite vigrahas of Ganesha, all across the country, through six states and seven temples. The article also discusses the history of these temples and places. 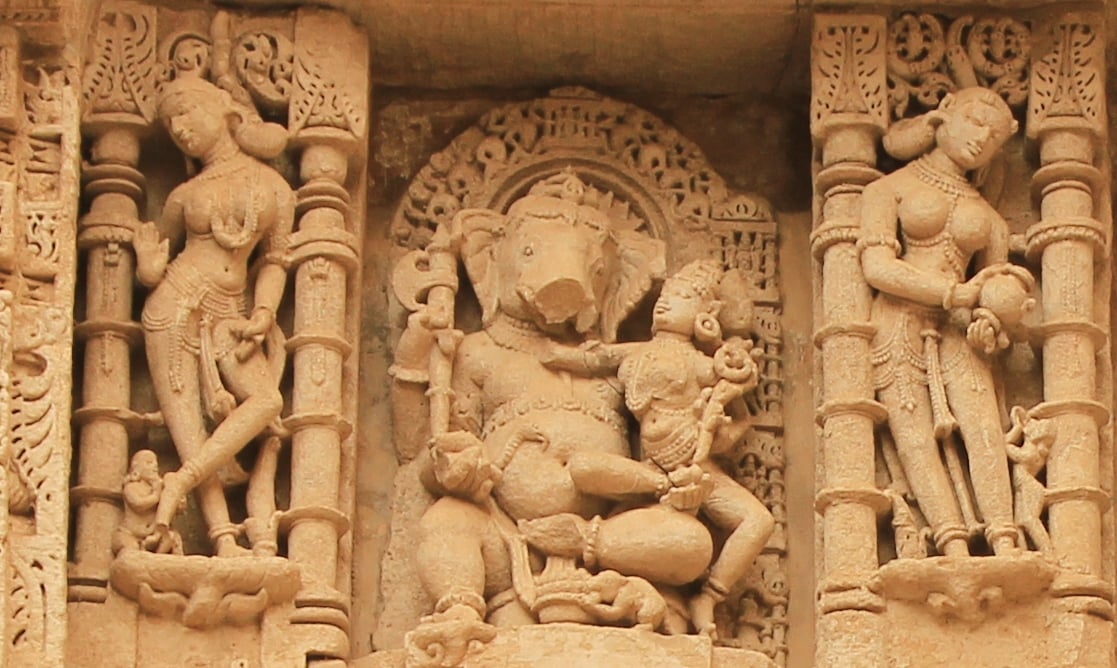 This vigraha of Ganpati sits alone outside the great Matangeshvara temple at Khajuraho, Madhya Pradesh. His hands are all broken. One can be seen to keep modaka. He must have been inside a great ratha on any of the great temples nearby including the Matangeshvara and Lakshmana temple, but the ASI couldn’t figure it out and he sits here.

But the Hindu ever ready to accommodate defeat and move on worships him in all his glory even in this open air temple. Khajuraho is a great survival story of Hindus and the Hindu temple. Had Khajuraho not survived, the most resplendent piece of Hindu architecture in north and central India would not be for us to see. Enough temples are left standing to have a fair idea of how monumentally great Hindu architecture was.

Khajuraho wasn’t spared by the Islamic invaders. It was abandoned by its Chandella rulers when they sensed that the Islamic invasion of India was going to continue for decades and centuries to come. They abandoned Khajuraho, hid it under bushes, left it under the care of some priests and shifted their capital to Mahoba further north. As a consequence, Khajuraho was ‘forgotten’ and saved, and Mahoba was destroyed.

But the destruction had happened later. For individual Muslims did manage to find their way to Khajuraho and hacked away at various of its great murtis and this destruction can be seen everywhere. This Ganpati seems to be the target of some devout Muslim as his limbs are specifically severed for desecration.

The Gangeshvari Devi Temple is one of the greatest Tantric temples of Odisha. Hidden inside a village which is still living in the ages of the past, it retains its pristine setting. It is a great place for meditation and the shakti can be felt easily upon entering the jagmohana.

The Ganpati adorns the ratha on the outer wall of the garbha-griha. He holds modakas in one hand, and the broken tusk in the other for writing the scriptures. The vigraha remains largely un-desecrated and the skill involved in sculpting is of the highest level for the sinewy curves and the elegance with which the Ganpati adorns can fixate your mind instantly on the essence. The whole place is magical.

The temple is in a pristine village of Bayalish Bati, negotiated through narrow roads and bridges after crossing many rivulets. There is a pristine pond in the village which still is clean and functional and remains the lifeline of the villagers.

Of all the temples and even all the Barahi Devi temples that I have ever been to, none has been so alive and yet so pristine in its form as this one.

This extremely resplendent and almost un-desecrated vigraha of Shri Ganesha is found on the outer walls of the Kamaleshvara Temple, Jalasangvi, Bidar, Karnataka.

The Ganpati here is in his Natya Ganpati form, albeit a lesser known one. He has eight hands and all of them show ayudhas and mudras. He carries ankusha, pasha, axe, conch and modaka in five hands. (Two ayudhas are not visible but can be surmised from the other ayudhas and the pose.) One hand either holds the broken tusk or it seems to be resting on a staff which is gone now. And the two uppermost hands most interestingly hold a sarpa (serpent) taking which in his hands, the Ganapati is dancing in absolute bliss.

It is one of the most beautiful of all Ganpati vigrahas I have ever seen on a temple wall, particularly those which are in low relief. All sculpture in this temple is also uniquely beautiful because of the rust-red color of the stone due to high content of iron in the stone naturally found in this region of Karnataka.

This is one of the most unique of all Chalukya temples. For the Chalukyas didn’t use the madanikas or shalabhanjikas on the pillar brackets, below the eaves and in the recesses very often. This became the feature of various Hoysala temples like the famous Chennakeshava at Belur, but it is not found in many Chalukya temples.

The temple is justly famous now because its madanikas are otherworldly beauties, so heavenly resplendent that they are equaled by none other. While the Hoysala madanikas at Belur are full of ornamentation and the carving is minute, the madanikas here are actually exquisite in their full glory without excessive ornaments and carving. Their sinewy postures sing to the visitor without the distraction of over-ornamentation.

But the modern art connoisseurs often forget that the vigrahas of the deities in this temple are almost as beautiful as the murtis of the madanikas. This temple was the inspiration of the Belur temple of Chennakeshava and many of its features.

Ganesha can be seen with ankusha and pasha and having Modaka. Kopeshwar Mahadeva is one of the most exotically located of all temples in Maharashtra. It is just at the border with Karnataka and culturally it is a part of Karnataka. More than half of the population that lives in this village speaks Kannada. It lies just on the banks of the great Krishna river. The Krishna here is low and slow flowing and barely seems like a small rivulet, but it indeed is the mighty Krishna that is later seen in eastern Karnataka.

The river makes a jig-jag for quite some time in this region and the temple lies smack on the river and in the front, across the river is Karnataka. When I visited this temple the GPS too went haywire and there was a just a small rickety bridge which could carry the vehicle in which we were driving. However, we did reach it and it was more than worth it.

The temple was built by the small Shilahara dynasty by the King Gangadaritya in the first half of the 12th century. The temple is profusely awarded with sculptured and every panel is sculpted, though the quality is inferior and greatest vigrahas are low-reliefs on otherwise plain walls. The elephant plinth is something to be seen and is quite unique in all ancient temples.

The mandapa now is open as the roof has fallen but the pillared mandapa still stands and the circular shape creates a disc at the top which lets in the sky, the rain, the wind and all the elements and it makes for a breathtaking experience.

Ganesha with his Shakti in an Upper Niche, Rani Ki Vav, Patan, Gujarat

One of the most stupendous of all step-wells, the Rani ki Vav is a wonder like no other anywhere else on earth. A step-well this deep and completely carved with most exquisite Hindu sculpture.

This panel is high up on a very high tier of the step-well. We are not allowed to visit near it and can only click pictures from far. It is in a series of devatas with their shaktis. This one shows Ganpati with his shakti. His axe and ankusha can be seen. He is framed by two surbalas with beautiful head buns.

This Vav was built by queen Udayamati, daughter of Khengara of Saurashtra, queen of the 11th-century Chalukya dynasty and spouse of Bhima I. It is one of the most elaborate of Vavs anywhere found which has been completely sculpted over. During the medieval ages, Hindus filled it with limestone in order to save it from the marauding Islamic invaders. But it had been desecrated sometimes before it was hidden. It was re-discovered in the 1940s and overhauled in 1980s. It is a world heritage site since 2014.

Ganesha on the wall of the Great Airavateshvara Temple, Darasuram, Thanjavur, Tamil Nadu

This temple is arguably the most beautiful of all the Great Chola temples with some of the most refined sculpture. It is much smaller than others but has many other elements. The horses that are seen here reminds one of the horses at Konark which was built later. The temple has all the elements of a complex Chola temple and is preserved beautifully as Islamic invaders couldn’t reach this temple.

It is also a great learning experience for any student of sculpture too, as all of its wall niches sport vigrahas of different devatas in perfect black stone. Ganesha holds ankusha and pasha in his hands, which in this un-desecrated temple can be easily seen. He is also having modaka prasada.

This Ganpati adorns the south wall of the Kakanmath temple, Morena, built by the great Kachhapaghata rulers of the region who were earlier vassals of the Pratiharas but then became independent rulers of the region. That even such small dynasties could build great temples shows that the art of temple building was universal in India and despite differences of regions and dynasties, guilds of great sculptors and architects built temples across regions and states.

The Ganpati in this vigraha stands in a relaxed position in dvibhanga and holds ankusha in one hand and axe in another. The other two hands are axed away by devout Muslim invaders. The ears are as resplendent as ever.

May this Ganesh Utsava bring us a time where the Ganpati temples are restored everywhere wherever they were destroyed and may they never get destroyed again.