Is the Caste System the main reason for the religious conversion of lower castes? : Missionary debates of the Nineteenth Century

It is evident from the missionaries debates that the caste system is neither the main reason for the religious conversion of lower castes, nor is it responsible for their backwardness. Today, if the support of reservation is needed to uplift the lower castes who converted to Christianity hundreds of years ago, then the Church must accept its failure and free these people from the shackles of Christianity. 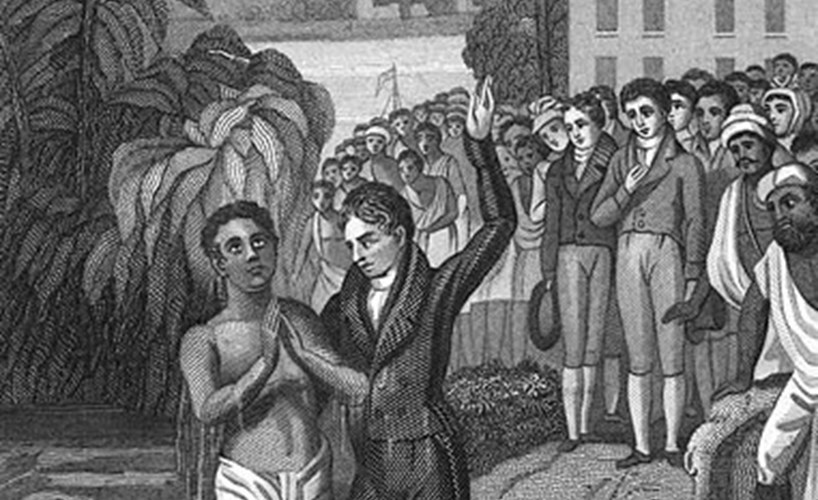 From the first decade of the nineteenth century, hordes of young protestant missionaries from England, Scotland, America and other countries, began to arrive in India. These missionaries not only had blind faith in the superiority of Christianity, they were full of hatred for Hinduism and the caste system. In fact, as early as 1793, protestant Baptist missionaries had started their endeavors for religious conversion in North India. In the western coast of southern India, the endeavors of the Roman Catholic Church were three centuries older while on the eastern coast, German Protestant missionaries were active since 1706. By 1826, the number of natives converted by the Protestant Church was claimed to be between fifteen and forty thousand while the number of Catholic converts was believed to be much higher.

The desire of people to free themselves from the shackles of the caste system was claimed to be the primary cause for the high number of conversions. But young missionaries were deeply shocked to find that even after hundred years of having converted to Christianity, the natives were at the same moral, intellectual and economic level as before. There was not even an iota of progress in this regard. They were even more pained to see that the caste system had remained intact among the converts who were still performing Hindu rituals and customs as before. Even the Church had approved of caste discrimination and the caste system.

This became a major point of contention and debate between old and young missionaries of southern India. The old missionaries were of the view that any interference with the caste system would not only hamper the progress of ongoing conversion endeavors but also lead to present converts abandoning their faith. But young missionaries said they had been told that the desire of people to free themselves from the shackles of the caste system drove conversions to Christianity, but if people are unwilling to abandon caste even after converting, then should we infer that caste atrocity is not the main cause for conversion.

If the caste system is an integral part of Hinduism and the basis for the privilege enjoyed by Brahmins, then how can the Church, which approves of caste within its own rank and file, weaken Hinduism and Brahminism? Moreover, if the caste system is responsible for the moral, intellectual and economic poverty of the natives, then why are these natives in the same wretched state despite having converted to Christianity long ago? These young missionaries questioned the reason for tolerating the caste system if it was incompatible with the Bible and Christian morality.

Based on these arguments, two young English missionaries named C.T.E. Rhenius and L.P.Hebrew made sure that anti-caste rules were strictly followed at a Church in a place called Vapery near Fort St. George. The older German missionaries strictly opposed this enforcement. Since it was in the center of British rule in India, the Protestant Church of Bengal was paramount in matters of religion. And the young missionaries of Vapery wrote to the Bishop of Calcutta protesting the German missionaries’ support for the caste system. This controversy spread to the Churches of Vapery, Trichinopoly and Tanjore. Bishop Father Heber, who had come down to South India in order to resolve this dispute, died there at Trichinopoly in 1826. Before setting out from Calcutta, Heber held long consultations with Christian David, a missionary who had been living in South India and Sri Lanka for a long time.

A committee was also set up in Madras for this purpose. These enquiries revealed an important fact that caste was a social system and not a religious one, and to interfere with such a social system was not the goal of Christianity. In his letter dated 21st March 1826, Heber informed William Binn that there is fierce caste discrimination between Shudras and the converts from the fifth caste. Shudras do not drink water from the cup used by the converts from the fifth caste. Yet, we should not interfere with the independence of the converts and allow them to follow the customs and way of life as laid down by their ancestors. Young missionaries were disappointed by this decision of Heber.

After Daniel Wilson was appointed as the new bishop in 1832, this issue was brought before him. Wilson came from the circle of Charles Grant and Wilberforce in England and so he vehemently opposed the caste system. Therefore, in July 1833, Wilson passed a religious dictum to completely disband caste within the rank and file of the Church and urged the converts to publicly display their dissociation from caste. But the older missionaries of southern India staunchly opposed this dictum.

As a result, even Bishop Wilson was forced to visit South India in 1835. This time, the missionaries of Tanjore, under the leadership of Caulough, presented fresh arguments.

Nonetheless, the young missionaries were adamant in their opposition to the caste system. Their concern was that if caste is kept intact, it would be used as a ‘bridge’ by the Christian converts to revert to Hinduism. Therefore, it was necessary to break this ‘bridge’. In their bid to dismantle caste within the rank and file of the Church, the missionaries began organizing public feasts, from 1847 onwards, in which everyone had to eat meals cooked by the lowest castes and drink wine from a common cup.

It is evident from the above debate that the caste system is neither the main reason for the religious conversion of lower castes, nor is it responsible for their backwardness. Today, if the support of reservation is needed to uplift the lower castes who converted to Christianity hundreds of years ago, then the Church must accept its failure and free these people from the shackles of Christianity.

Translated from Hindu by Ankur Kakkar