What is common between Leonardo Da Vinci, Albert Einstein and Steve Jobs? To start with, they were creative geniuses and they loved science, music, and art. But the deeper connection between these luminaries is that their creativity was a product of the interaction between science and art. In fact, they did not see a conflict between their scientific and artistic tempers. This would seem surprising to many of us who have long believed in the dichotomy of science versus arts, logic versus creativity, or, left brain versus right brain. Now, the theory that people are either left-brained or right-brained is no longer accepted, even in scientific circles. Yet, it is precisely this idea that has shaped our education policy for over a century. The new education policy is a refreshing change in this respect. Read on to know why. 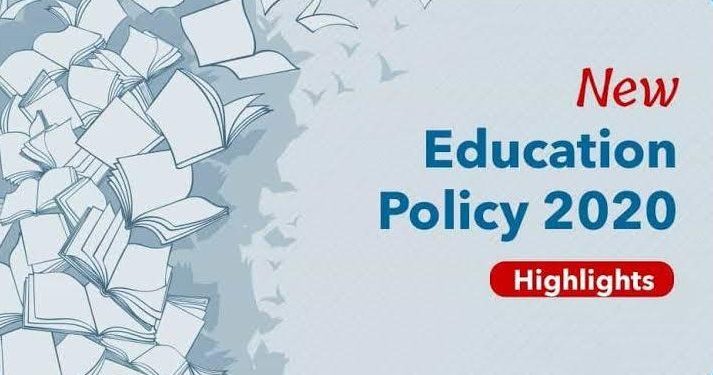 A new education policy was approved by the Government of India on 29th July 2020. This comprehensive document of 66 pages can be read here. This new policy aims to bring about many reforms in the education sector. Here, I will focus on one reform that the new policy aims to bring about, namely, the endeavor to push for multi-disciplinary education. Until now, students were classified according to the conventional streams of science, commerce and humanities. The new policy aims to change this structure by allowing students to pick and choose subjects of science, humanities and commerce. Let us see what the policy says in this regard. But before we look at the new policy, let us begin with a brief background.

India instituted its modern education system in the nineteenth century, especially from 1854 onwards, under British colonial rule. Since this system was modelled along the lines of European universities, the roots of this system are embedded in eighteenth and nineteenth century European ideas. The predominant ideas at the time were rooted in what Fritjof Capra has called the ‘Cartesian’ or ‘mechanistic’ worldview that views nature as a machine consisting of separate fragments. So, the institutionalization of separate academic disciplines stems from this worldview. [1] Now, in the twentieth century, the ‘Cartesian’ worldview was seriously challenged because it was unable to explain complex natural phenomenon such as the behavior of sub-atomic particles. Physicists observed that the behavior of sub-atomic particles was determined not by separate individual particles but by the interactions between the particles. Similar patterns of interactions were found in other fields such as economics and psychology. So, gradually, the ‘Cartesian’ worldview gave way to the ‘Systems’ worldview that views nature as an integrated web of various elements that are dynamically linked. It is important to quote Capra again: “The new theory, or set of models, is likely to involve a systems approach that will integrate biology, psychology, political philosophy, and several other branches of human knowledge, together with economics, into a broad ecological framework. The outlines of such a framework are already being shaped by numerous men and women who refuse to be labeled economists or be associated with any single conventional, narrowly defined academic discipline.”[2]

Departing from the past

The focus on multi-disciplinary education is one of the fundamental principles of the India’s new education policy. This aspect has been underscored at several places in the new policy document. The first reference to this aspect is in the fifth page of the policy document where the fundamental principles of the policy are listed. [3] This point is elaborated further in the document. For example, in the section titled “Empower students through flexibility in course choices” , the policy states that students will given increased flexibility and there “will be no hard separation between ‘arts’ and ‘science’ streams”. [4] The same principle is reiterated and emphasized for university education. For instance, the policy document states: “Imaginative and flexible curricular structures will enable creative combinations of disciplines for study, and would offer multiple entry and exit points, thus, removing currently prevalent rigid boundaries and creating new possibilities for life-long learning.” [5]

A leaf from the past

The new policy document draws inspiration from ancient Indian education ideals in the sense that the idea of multi-disciplinary education which was present in our pre-colonial education system is sought to be revived by the new education policy. In this respect, the new policy document sees a similarity between ancient Indian universities and modern universities. The policy document states: “India has a long tradition of holistic and multidisciplinary learning, from universities such as Takshashila and Nalanda to the extensive literatures of India combining subjects across fields. Ancient literary works such as Banabhatta’s Kadamabari described a good education as knowledge of the 64 Kalas, or arts […] this notion of a knowledge of many arts or what in modern times is often called the ‘liberal arts’ must be brought back to Indian education, as it is exactly the kind of education that will be required for the 21st century.”[6]

There is no doubt that education in pre-colonial India was more dynamic and integrated than we tend to believe. Historical research into the nature of our pre-colonial education system reveals that our ancestors viewed education as a holistic web. For instance, in the case of the Tinnai (the Tamil word for verandah) or elementary schools in eighteenth century South India, the study of mathematical tables was intricately linked with poetry and music. D. Senthil Babu has explained this interesting form of pedagogy in the following words:

“Below each table, a Tamil verse in a prosodic form functioned as a mnemonic to remember a number, which would be the sum of the products of that particular table. For example, in the first table given above, the verse about jasmine buds was to denote the number 595, which is the sum of the products of the first table. Every table has a prosodic verse denoting the sum for it, and when sung aloud, these verses have a rhythm that quickly entered the memory. Here is an instance where we can see that in a memory-based learning system, how a prosodic verse functioned as a mnemonic to remember an entire table that lent meaning to the mnemonic only in that context.”[7]

In addition to studying the three Rs (reading, writing, and arithmetic) as well as language and grammar, pupils read excerpts from the Ramayana, Mahabharata and Bhagvata Purana and other regional epics. [8] It would seem surprising that the Puranas were a part of our education system and even more surprising that they cannot be classified into any single discipline. In his analysis of various Puranas including the Bhagavat Purana, Ludo Rocher mentions that these texts shed light on a wide range of topics such as temples, medicine, astronomy and grammar. [9] Inter-relatedness of disciplines is of course not alien to Indian knowledge systems, for it is rooted in the ancient Vedic metaphor of “Indra’s Net” – a web of inter-connected jewels where each jewel is reflected in every other. This Vedic metaphor has been beautifully explained by Rajiv Malhotra in his discussion about the interdisciplinary nature of Indian knowledge systems: “The integral unity of the whole manifests itself in the parts, and they in turn aspire to unite with the whole: this principle is reflected in every domain of dharmic knowledge […] every domain of dharmic knowledge is itself a jewel in Indra’s Net, and reflects all others.”[10]

By allowing for inter-disciplinary study, the new education policy departs from old and reductionist scientific principles. At the same time, this policy aims to revive the spirit of our ancient education system. In this sense, our new education policy is at once progressive and regressive, in positive ways.

Book review on "Caste as Social Capital: The Complex Place of Caste in Indian Society" by Ramachandr...
Islam & Communism: An Unholy Alliance
Knowledge, Culture and Tradition in India