How Nehru Blindfolded India into the Chinese Folly

This second part of the series on Indo-China relations analyzes how there were ample signs on China’s side which indicated its true designs of grabbing Indian territory but Nehru not only ignored them but instead went ahead with India-China friendship. This article, along with other incidents, tell us how Nehru came to know about that China has built a road in India’s territory seven years after the event. 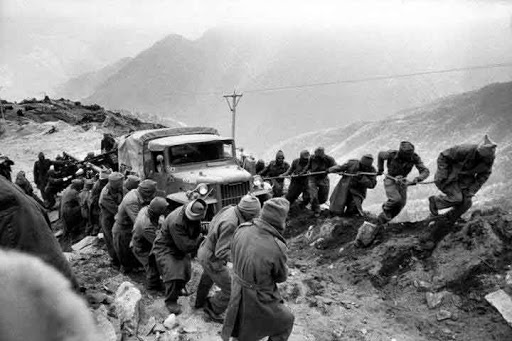 China’s successful invasion of Tibet in October 1950 and India’s cold response to it vindicated the belief of Mao that India is too weak or unwilling to challenge China militarily against its aggressive activities around Sino-Indian border which was earlier Indo-Tibetan border. Nehru, who lived in his own imaginary world of Afro-Asian solidarity and a coalition of socialist and Communist countries, was still hopeful that China would extend the hand of friendship to India.

After the annexation of Tibet, the correspondence of the Ministry of External Affairs of India with Chinese counterparts shows that while India was willing to accept Chinese sovereignty over Tibet, China considered India to be an agent of American imperialism while consistently whipping up the issue of border demarcation.

While Nehru’s perception of reality was clouded by his underlying love for Communism, Sardar Patel didn’t harbour any such fantasy. In a letter to Nehru, Patel wrote, “Even though we regard ourselves as the friends of China, the Chinese do not regard us as their friends. With the Communist mentality of “Whoever is not with them being against them”, this is a significant pointer, of which we have to take due note.” Patel’s assessment of China was in consonance with the prevailing thinking of the global Communist movement which had considered Indian freedom to be a sham as the Communist Party of India had not managed to seize power in India. This view was expressed in the Second Congress of Communist Party of India held in 1948 which regarded Congress as representative of National Bourgeoisie and the necessity to wage armed struggle against the Indian nation.

Chinese aggression which was hitherto limited to their contention on the legitimacy of boundary in NEFA sector extended to Ladakh as well. In 1951, Chinese forces started patrolling in Ladakh but Nehru considered it irrelevant for national security. He later remarked in the parliament that he didn’t inform the house earlier as it was not considered to be important in his opinion. It should be noted that Nehru was responsible for India’s foreign policy which he handled with his small group of sycophants who were the fellow travellers of Communists.

In the period of 1950s, Chinese adopted two pronged approach of building military infrastructure in Tibet and Xinjiang while expounding the principles of peace and peaceful coexistence which was dear to Nehru. With much ado, Nehru and Chinese Premier Zhou Enlai propounded the doctrine of Panchsheel in June 1954 which was going to be the cornerstone of Indian foreign policy vis-a-vis China. In India’s bureaucratic set-up, the prevalent thinking was that as long as Nehru is alive, there can’t be any war against China. Consequently, all the efforts need to be dedicated towards countering Pakistan. The official goal given to Indian Army was to defend the country against a second class land power. It was clear that China was seen as a friendly nation.

When Nehru was committing a series of diplomatic blunders, Indian armed forces were consistently being weakened by eroding the authority of Army HQ and erroneous notion of civil supremacy. Indian Army before the independence of India was a British force in its objective and outlook. Indian freedom fighters considered them to be nothing more than mercenaries of British Empire which had created a natural distrust between the civil and military setup. As Indian freedom movement didn’t require any sustained armed struggle or raising any revolutionary army, Indian freedom fighters were unable to understand the role of the Army in securing the defence of the nation. It was reported that Nehru had even considered disbanding the Army as he was confident that India can secure its territorial integrity without having an army.

After Indian independence the defence ministry was given the least priority. There was no effort to reorganize and re-equip the Indian Army in the changing circumstances. Pakistan which embarked on the journey of modernizing its armed forces with massive military support from America wasn’t enough to alert the Indian authorities. During the 1962 Sino-Indian War, the range of infantry weapons of PLA exceeded the range of artillery weapons of Indian Army. Indian soldiers were armed with World War I era Lee Enfield rifles which had been shelved in museums by then.

American President Dwight Eisenhower had offered Nehru military assistance in 1953 but Nehru rejected the help in the favour of American assurance that Pakistan won’t use the American weapons for aggression against India which was proved to be a hogwash during 1965 Indo-Pakistan War.

When it came to military procurements, the finance and defence ministries were always at loggerheads as the Cabinet Committee on Defence hadn’t formulated any national security objective for the Indian armed forces. Finance ministry kept on rejecting the proposals by citing the inexcusable alibi of not having enough funds for the procurement. This is typically blamed on the stubborn attitude of Moraraji Desai but Nehru is the bigger culprit as the Prime Minister must have intervened if the issue of national security was getting such apathetic treatment by the finance ministry.

On the other front, there were efforts from the government to interfere into the appointment of senior generals so that the government could thrust its agenda on them without much protest. Army HQ was effectively reduced to be a shadow of the Ministry of Defence as even technical issues were being decided by the civilian bureaucrats.

The negligence and credulity of the Indian government didn’t stop Chinese from working on their plans and events of 1959 were the definite signs of impending doom. Chinese Premier Zhou Enlai said in April 1959, “The boundaries between China and certain neighbouring south-eastern countries remain undetermined and they could reasonably be solved through peaceful negotiations.”

Though the word ‘peaceful negotiation’ figured in Zhou’s speech, the events which happened between July and October 1959 showed that China was planning for anything but peaceful negotiation to solve the boundary issue. On July 28, 1959, an Indian patrol party which went for reconnaissance in Aksai Chin was apprehended by Chinese giving the clear signals that India’s claim on Aksai Chin is not militarily tenable.

The events of August were explained by Nehru in his own words in the parliament. Nehru said, “On 7th August about 200 Chinese violated our border at Khenzemane, north of Chutangmu, in Kameng Frontier Division. When requested to withdraw they pushed back — actually pushed back — our greatly out-numbered patrol to the Bridge at Drokung Samba. Our people consisted of ten or a dozen . . . there was no firing. Later on the Chinese detachment withdrew and our forces established themselves.” In the assessment of Nehru, it was still a minor border skirmish which didn’t warrant an assessment of our Chinese policy for further actions. However, something more sinister happened in the month of October 1959.

On October 20, 1959, Chinese PLA ambushed a patrol party of ITBP near Kongka Pass and killed 10 Indian soldiers and took others in captivity. When India protested diplomatically, China replied in its predetermined words that India was the aggressor which had violated Chinese territory. Zhou Enlai again used his predictable stance of resolving the issue through peaceful means and negotiations while his soldiers did exactly opposite of it. It was the hallmark of Communist diplomacy that after each act of aggression and swallowing Indian territory, it always advocated for talk and diplomatic measures which India bought without any considerations.

The events of 1959 caused much embarrassment for Nehru which triggered a series of decisions which were proven to be fatal in 1962. The years of negligence and deliberate sabotage of India’s national interests couldn’t be salvaged by the halfhearted measures of mobilizing Indian army on the NEFA border. In the subsequent articles, we will cover the events from 1959 to September 1962 before we deal with the full-scale military conflict which began in October 1962.

The Chinese Invasion of Tibet