Amidst the tensions at border and exact rehearsal of the events of past, it becomes absolutely ne-cessary to have a clear historical interpretation of events that led to the Indo-China conflict in the Galway Valley. Here the author discusses a brief history of the trilateral relations of India-China-Tibet. He also discusses the annexation of Tibet as a part of Chinese Communist government’s plan. 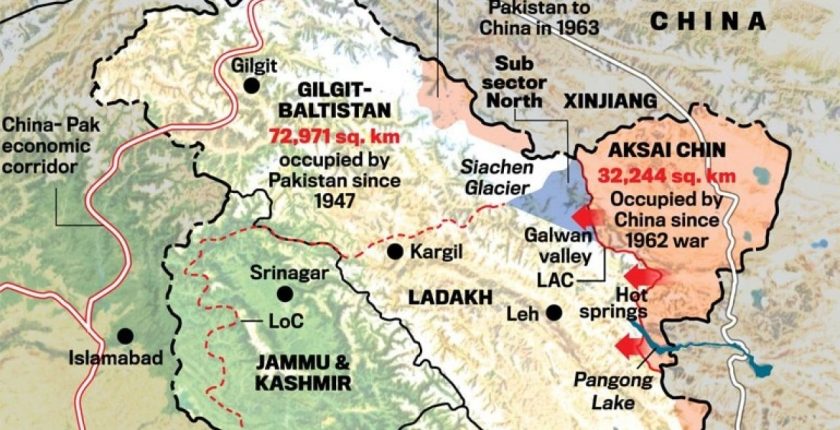 Ever since the annexation of Tibet by China, Chinese communist government has been asserting more and more claims on India’s very own territory. But is Tibet really Chinese territory? China claims that Tibet was always its integral part but history tells a different story.

With an area of nearly 5,00,000 sq. miles, Tibet at present consists of almost 25% of China’s land. Called the ‘The Roof of The World’, it is surrounded in all sides by the high snow-capped mountains, except in the east where it gradually slopes down for about 6000 feet into the plains of China. Over the centuries, the region of Tibet was shared among several large ill-defined areas, mostly populated by the nomadic tribes, who were constantly in dispute with the North-West China on one side and Sikkim, Bhutan and Ladakh on the other.

The original religion of Tibet, the Bon, in its Buddhist influence, can still be traced in Sikkim. Then the introduction of Buddhism in the region in 7th century, resulted in inter-mixing of the philosophies. The subsequent expulsion of Chinese Buddhism following a defeat in a debate with the Buddhist monk from Swat, Padmasambhava, removed all the obstacles in imbibing the fervors of Indian Buddhism. Lamaism is nothing but the Indian Buddhism which absorbed some of the indigenous culture. It has very strong similarities with Tantra in India.

However, it is also true that Tibetan Buddhism developed separately from the later school of Indian Buddhism, but the adherence to the teachings of Buddha remained in place. In later days, this act of unification was undone and rendered fissiparous thanks to insipid rulers and internecine strife. Tibet also had to capitulate many of its territories including Nepal and Sikkim, and many of China’s, which it had conquered.

And then came Kublai Khan, the Mongol warlord. His coalition with one of the rival monasteries, Sakyapas, culminated in the victory after a century old internecine rivalry. In the same time, the Mongols were able to conquer China, and emerged as a common master of Tibet and China, bringing, in a way, the two otherwise independent countries under one head. From an alternate interpretation, the ruler of Tibet became a subordinate of the Mongols, and not the Chinese, which too happened to be under the Mongols. This is the ‘evidence’ that China cites when it claims Tibet as its territory.

The Sakyapas ruled for over hundred years with a line of twenty Sakyapa Lamas before it was thrown away by rising Tibet nationalism under the Changchub Gyaltsen (1302-1370). This was shortly accompanied by revival of Chinese nationalism which chased away the Mongols to establish the Ming Dynasty. But the Tibetan connection with the Mongols did not cease. The establishment of Ming Empire meant nothing to Tibet.

In words of Hugh Edward Richardson, “There is no substance in the claim of Chinese that Tibet was in unbroken subordination with the Yuan dynasty. The link between the Peking and Lhasa came into being only through the conquest of China by a foreign ruler who had earlier been accepted by the Tibetan as their overlord”. (Quoted in Mullik 1971, 16)

China’s claim on Tibet was a classic case of historical distortion. Tibetans link with the Chinese was non-existential as late as 1700s. In 1705, the Chinese emperor placed a puppet government in Tibet under Lhabsang Khan and also established a ‘Fake Dalai Lama’. In the uprising by the monks, aided by the Dzungars (The Mongol supporter of monks) that followed, the Lhabsang Khan was killed along with the ‘Fake Dalai Lama’. By the late 1720, the Qing emperor had defeated everyone who had opposed him and established a complete control over Tibet.

But this phase was ephemeral. Soon Tibet was attacked by the Nepalese Gorkha Hindus headed by Prithi Narayan, which had come to power in Nepal by vanquishing the Buddhist Newars. They were able to gain control of some of Tibetan areas and made the Tibetans pay compensation for two years. Soon again, Gorkhas attacked Tibet for the second time, but were vanquished by the combined armies of the Tibetans and the Chinese.

This was one of the few times that the Chinese army came directly in Lhasa, which earlier it had controlled only through satraps. Although the Chinese maintained their suzerainty over the Tibet, its zeal in Tibet grew feebler. Besides, the Anglo-Chinese war (The Opium Wars) had decimated the Chinese. So when the Dogras of North and North-west India invaded Tibet, it was mainly the Tibetan army which had checked their aims. Again, it was purely the Tibetan army which checked the third Gorkha intervention in the Tibet. In subsequent years, the anti-Chinese sentiments grew in Tibet and in a brutal uprising that followed, Tibet declared the independence in 1912. In this way, the Chinese claim over Tibet, whatever it was, officially ended.

Meanwhile in 1914, the British representative, Henry McMahon and his Tibetan counterpart Lonchen Shatra signed the Simla Convention, delineating Tibetan and Indian territories from Himalayas in the north to the NEFT in the east, also marking the Burmese border. They also decided the boundary between China and Tibet in presence of a Chinese delegate in the very same meeting. But soon China started to shrug off.

In contrast, relationship between India and Tibet had been for most of their history. India never coveted the territories of Tibet. All their endeavours were philosophical in nature rather expansionist. Flow of literature and elites was frequent. Buddhism was introduced in Tibet as early as 7th century and reached its zenith in the subsequent century. Tibetans had connections with the great Buddhist centers of Nalanda and Bodhgaya. Dispute didn’t pertain to boundaries because the topography provided the natural boundaries. Most of the NEFA tribes were independent. Even the Tawang monastery, on which Tibet claimed sovereignty till 1914, was independent and was ruled by the Lamas and the Tawang monastery.

India’s relation with China was also frequent during the period. Most of the interaction took place not through Tibet but through the Karakoram Pass, into Sinkiang (Xinjiang) and then into Han China. Other route included the classical maritime route through the South-China Sea into the southern Chinese ports. The trade was two ways. The Chinese came searching for the intelligence and translated the classical Sanskrit works into Chinese, while also translating some Chinese philosophical texts into Sanskrit. The Chinese works meticulously mentioned every Indian traveller to China during the period. But these works mention nothing of travellers who visited Tibet, including Padmasambhava, indicating the absence of relations of the Chinese with the Tibetans.

But things were getting worse. The advent of communism in China changed the geo-politics forever. The Chinese annexed Tibet once the British left, citing untenable arguments. Indian policy makers, clueless about geo-politics, were left awestruck by the surgical precision of diplomacy of the communists. Then the communists went on to invade India too, seizing a significant part of NEFA’s Tawang and Bomdila. They invaded Ladakh also, but the Indian army succeeded to hold them back there. But they left the NEFA’s conquered area for some mysterious reason. Nehru’s personal benefits and unfavourable closeness with the incompetent people proved fatal to the country.

If India aims to become a super power, paying attention to the immediate geopolitics is very important. If India is absent or clueless in its own backyard, it cannot harbor desires of global dominance. Paying attention to its norther and eastern borders should be an immediate priority.