Hagia Sophia and the Return of Islam

This article discusses a watershed moment in world history: Hagia Sophia turning into a mosque again. This monument which was created as a church in 6th century in Christian Constantinople was converted into a mosque in 1453 after Constantinople lost to the Islamic armies of Sultan Mehmet II and Constantinople became Istanbul. But after the creation of Modern Turkey, this was turned into a secular institution, a museum, in order to show respect to history. Turning the wheel of time back to the fundamentalist sands of 7th century Arabia, Erodan, the Islamic fanatic President of Turkey makes this a mosque again. 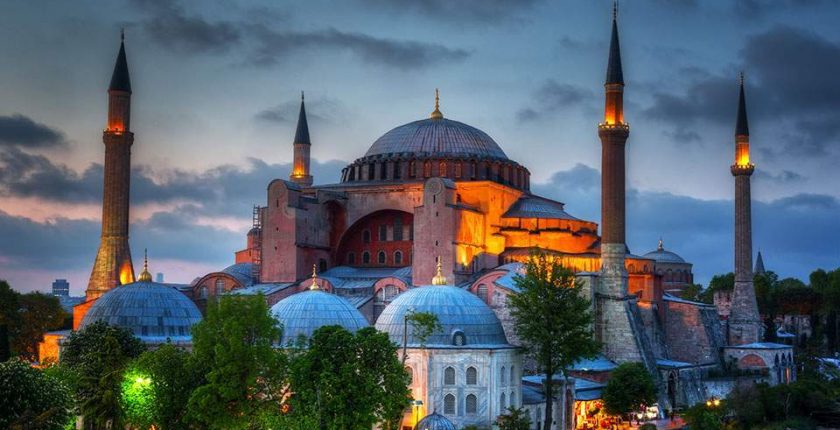 Hagia Sophia in Istanbul, Turkey, becomes a mosque again. The first azaan in 85 years was heard from Hagia Sophia on 10th July 2020.

In all of Islamic world, Hagia Sophia was the only major monument which despite being in an Islamic country had chosen to remain neutral and portray its history as well by being a museum.

But according to a resolution passed by Islamic fanatic dictator Erdogan today, the Hagia Sophia is once again a mosque, no longer a museum and no longer willing to stay neutral.

It once used to be a great pagan city of Greek Byzantium.  When Greece was overrun by Christianity, it was destroyed as a pagan city and its name was changed to Constantinople. The pagan heritage of the city was thoroughly destroyed and a Christian city, a Christian Empire was built over that.

Emperor Constantine who converted to Christianity and made it the state religion made this city the capital of the Christian Roman Empire. From this point to around 1200 years it remained the most preeminent city of Christendom in the western world. After pagans were killed and converted entirely to Christianity the city of Constantinople actually became a reservoir of preserving a lot of pagan heritage in the form of ancient manuscripts, desecrated sculptures, and converted buildings showcasing ancient architecture.

But the woes of the city were far from over. A new menace in the East was rising. The specter of Islam was at the gates of Constantinople even in the 8th century when the Arabs laid many raids on Constantinople but were unsuccessful. After that many kingdoms and Islamic kings attacked Constantinople without having any luck. But around 12th century a formidable power had been rising with its centre at Ankara – the Ottoman Empire. One of the strongest empires in the history of Islam it had its eye on the Golden Apple – Constantinople. Starting from around 12th century it finally breached the walls of Constantinople in 1453 and the most important city of Christianity, the erstwhile centre of the Christian Roman Empire fell decidedly against Islam.

It was a Holocaust once again. Churches were gutted. Libraries were burnt. Manuscripts were destroyed. Constantinople became a wasteland once again. Hagia Sophia, the greatest of Christian churches in whole Christendom was converted into a mosque, as is the policy of Islam. It cannot tolerate heathen places of worship under its rule, under Dar-ul-Islam.

Even the name of Constantinople did not survive. It became Istanbul, the preeminent city of Islam.

Islam has had no greater victory in its history.

But then through some quirk in history Mustafa Kemal Ataturk became the leader of Turkey after it was defeated in the First World War and the Ottoman Empire was dissolved. Modern Turkey was born and Ataturk thought that overt symbols of Islam would have to be suppressed in order to make military, social and civil advancements in order to keep pace with the Western countries. In that he was successful and a lot of historical monuments which were snatched from Christianity were turned into museums.

Being still a country with an overwhelming Muslim population, Hagia Sophia could not be reverted as a Christian Church. But as a consolation and a compromise it was converted into a museum which was not to be used as a Muslim religious place and could be frequented by anyone of any faith. In a way, it represented the secularization of Turkey where if not going back to Christianity or paganism, the most important monument of the country would at least be a witness to the brutal history of the city where paganism was conquered by Christianity and Christianity was conquered by Islam.

This hope is what got destroyed today. Under Erdogan Turkey is well on its way to Islamic fundamentalism, but few surmised that he would go to the length of taking back Hagia Sophia.

Ali Sina, the ex-Muslim who ran the website faithfreedom.org used Hagia Sophia as a symbol of nations and countries which successfully threw the yoke of Islam and became free.

It is painful to see that Hagia Sophia reverts to a mosque once again. This is a warning to all of us. Islam lives to destroy all other societies and religions. It does not matter if you are interested in Islam. Islam is interested in you. If we do not take care of our temples in India, one day they will be destroyed like millions have been in the past and they will be converted into mosques. Islam has to be tackled in its totality. Otherwise it will come back to reclaim what it thought once was its dominion.

Kaffirs within Kaffirs: The Devolution of Islamic Society
How Christianity Destroyed the Pagan Greece
Will the Modi Government Integrate POK?